By Yue Yue and Dong Tongjian 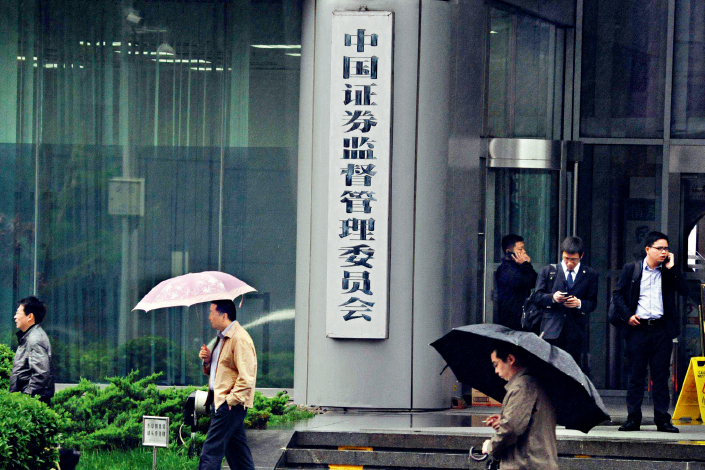 (Beijing) – China’s deleveraging campaign is reaching into every corner of the shadow banking industry as the government seeks to weed out risky debt-fueled practices that could trigger instability in the financial system.

While the banking regulator has grabbed most of the headlines, the securities watchdog has not been idle. Its latest target is the so-called channeling business, where non-bank financial institutions earn fees by acting as intermediaries to help banks circumvent regulatory requirements and funnel money into higher-risk lending and investment.

The China Securities Regulatory Commission is responsible for overseeing securities companies and fund managers, two of the main players involved in the business. At a briefing in mid-May, the commission said companies should go back to basics and focus on managing assets “prudently and diligently” rather than abrogating their responsibilities for asset management to the banks through the channeling business.

Regulators including the CSRC were relatively lax in their supervision and control of financial institutions over the past few years as they encouraged growth in the capital markets to reduce the country’s reliance on the banking system for credit. While that opened up more opportunities for innovation and expansion, it also created more risks as institutions became increasingly interconnected and interdependent. They also become more adept at skirting rules aimed at controlling those risks, playing cat and mouse with regulators who, for the most part, went along with the game.

But as economic growth has slowed and bad loans have grown, the government has become increasingly concerned about the risks lurking in the banking system and their potential for threatening the country’s financial stability. As a result, the People’s Bank of China, along with the banking, securities, and insurance industry regulators have been flexing their muscles, targeting various opaque and risky financial practices.

“The CSRC has made it clear that its top priority now is to stop turning a blind eye to what’s been going on and to force securities firms do what they are supposed to do,” a person close to the watchdog told Caixin.

The channeling business grew from virtually zero in the early 2010s and boomed from 2014 to 2016 as banks sought to park customers’ deposits into higher-yielding investments to boost their profits. They also used channeling to shift loans off their balance sheets in order to lower their non-performing loans, meet capital adequacy requirements, and evade curbs on lending to industries subject to government restrictions, such as local government financing vehicles, property, steel and coal.

For their part, non-bank financial institutions were happy to act as intermediaries because they earned fat fees from the banks.

Channeling differs from entrusted investment, where banks outsource the management of some of their funds to third-party asset managers for investment in the bond, stock and commodities markets.

Although the growth rate of assets managed by TAMC has been slowing due to tightened regulation, they still account for a big chunk of the companies’ overall assets under management – 71.1% in 2016, up from 62.7% in 2015, data from the Asset Management Association of China show.

For some securities firms, fees from channeling account for as much as 50% of their total revenue earned from asset management, according to the managing director of a major brokerage, surnamed He, who spoke on a conference call hosted by SinoLink Securities. Depending on the severity of the CSRC’s crackdown, some securities firms could see their total revenue drop by as much as 5%, said He.

But loss of income could be the least of the problems facing securities firms and fund management companies. A slowing economy, along with weak internal risk control and loan evaluation by banks is leading to an increasing number of defaults. These credit events are exposing a grey area over who bears ultimate responsibility for shouldering the losses and also highlighting the complex chain involved in the loans.

In early May, Zhongshan Securities Co. Ltd. and the Qingdao branch of Industrial Bank Co., jointly filed a lawsuit against Foshan Zhonghong Hotel Investment Co. to recover 450 million yuan in unpaid principal and interest on a 500 million-yuan loan. The Shenzhen branch of the Export-Import Bank of China was also named as a defendant in the case as it had guaranteed the two-year loan for the Guangdong province-based hotel developer.

Industrial Bank channeled the funds to Zhongshan Securities, which entrusted the money to Nanchong City Commercial Bank, a small bank based in southwest Sichuan province that recently changed its name to Sichuan Tianfu Bank. Nanchong then made the loan to the developer and the Export-Import Bank offered a guarantee to repay the loan, interest and relevant penalties in the event of a default.

Guangdong Golden Dragon Development Inc., Zhongshan Securities’ parent, said in a Shenzhen Stock Exchange filing on May 4 that it was “clearly” written in the master asset management agreement between the two institutions that the legal risks of entrusted loans would be assumed by Industrial Bank’s Qingdao branch.

This is just one example of the legal and financial quagmire institutions involved in the channeling business could find themselves facing due to the lack of clarity in regulations and contracts, and poor internal risk control.

“In general, the level of risk control, internal governance and compliance with regulations is not very high in the securities and fund management industry,” a source close to the CSRC told Caixin. “Some financial institutions are still rather unsophisticated, badly managed and even barbarian,” he said, repeating a word first used by Liu Shiyu, the head of the commission, back in December.

In its statement on May 19, the CSRC said it will hold accountable those securities firms and mutual funds that create major risks because of insufficient risk control and poor operation and management. “Black sheep” who severely violate rules and regulations will be rooted out, “so as to ensure a sustainable and healthy development of the securities and fund management industry.”