Age of Empires: What Qin and Han Dynasty Treasures Tell About Artistic Influences Along Silk Road 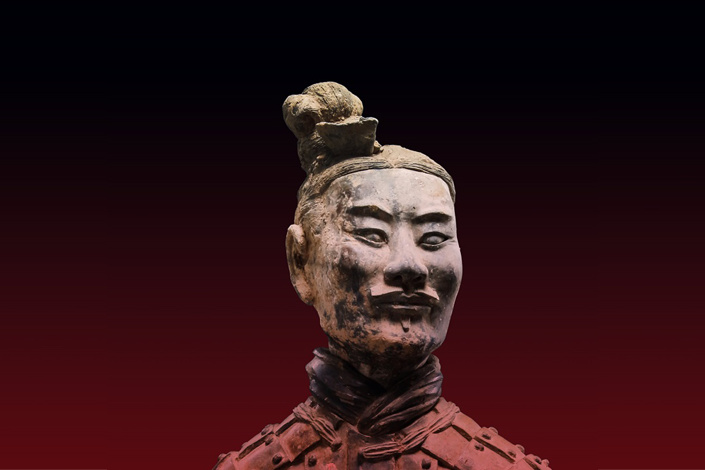 The Terracotta Army is a collection of terracotta sculptures depicting the armies of Qin Shi Huang, the first Emperor of China. It is a form of funerary art buried with the emperor in 210–209 BCE and whose purpose was to protect the emperor in his afterlife. Photo: The Met

In his May 14 keynote address at the opening ceremony of the Belt and Road Forum for International Cooperation, Chinese President Xi Jinping extolled the glories of the ancient Silk Road and noted its roots in the Han Dynasty (206 B.C.- A.D. 220).

“Around 140 B.C.,” Xi said, “Zhang Qian, a royal emissary, left Chang'an, capital of the Han Dynasty. He traveled westward on a mission of peace and opened an overland route linking the East and the West, a daring undertaking which came to be known as Zhang Qian's journey to the Western regions.”

As Xi was addressing world leaders gathered at the Beijing forum, a major exhibition of Han and Qin dynasty art and relics was drawing crowds to the Metropolitan Museum of Art in New York. Called “Age of Empires: Chinese Art of the Qin and Han Dynasties,” the thought-provoking exhibition, which runs until July 16, is the latest, and arguably the most spectacular, of several international exhibitions to showcase the Han Dynasty in recent years. These include “Tomb Treasures: New Discoveries from China’s Han Dynasty,” at San Francisco’s Asian Art Museum until May 29; the 2015 "Rise of the Celestial Empire: Consolidation and Cultural Exchange during the Han Dynasty" at the Hong Kong Museum of History; and the 2014 “Splendor of the Han Dynasty, the Rise of the Celestial Empire” at the Guimet Museum in Paris. President Xi himself co-authored the preface for the Guimet show, and in April of this year visited the Han Dynasty Museum in Hepu, Guangxi, the site of 20,000 Han tombs and the source of several objects on display at the Met.

The recent abundance of Han Dynasty exhibitions springs in part from spectacular late 20th and early 21st century archaeological discoveries of Han tombs, many unearthed during the construction of expressways. These tombs have provided an unparalleled window into the lives and belief systems of the Han elite – and even brought to light the world’s oldest egg, tea, and wine. But these discoveries have also proven to be the right tombs for the times; modern day political realities are an important contributor to the current Han vogue, among them the desire to connect the Belt and Road Initiative to the Silk Road and the current era to the Han Dynasty.

The Qin Dynasty (221-206 B.C.), which unified China and preceded the Han, is now widely known throughout the world, largely thanks to the stunning army of terracotta soldiers that guarded its first emperor’s tomb and were discovered in Xi’an in 1974; several of these astonishing figures are in the Met exhibition, displayed in a manner that allows visitors to literally come face to face with these ancient guards. But the Qin Dynasty was short, lasting less than two decades, and its best-known relics are military. The Han, by contrast, lasted four centuries, and its treasures are more abundant, allowing for a more complete, less martial portrayal of society. The Han Dynasty was also vast, its lands stretching from Southern Siberia to the South China Sea, from the Liaodong Peninsula to the Pamir Mountains.

It was also a period of relative wealth.

As famed historian Sima Qian (145 or 135– 86 B.C.) wrote in his Records of the Grand Historian, “the granaries in all the towns are brimming with reserves, and the coffers are full with treasures and gold, worth trillions. There is so much money that the ropes used to string coins together rot and break – an innumerable amount. The granaries in the capital overflow and the grain goes bad and cannot be eaten.”

The Han was strong and united – at least for long periods – and its influence extended far and wide, along the Silk Road and across the seas. It was an era of “military, political and economic power and confident cosmopolitanism,” Zhixin Jason Sun, curator of the Met exhibition, explained in the accompanying catalog. The Han Dynasty, he continued, “nurtured a new sense of a common ‘Chinese’ identity among the diverse and various regions that made up its empire – just as the disparate peoples of the Roman Empire may have considered themselves ‘Romans.’”

It was during the Han that many fundamental Chinese virtues were codified. The show includes, for example, a wooden walking staff topped by a partridge-shaped finial; it was found alongside wood slips that outlined privileges accorded to senior citizens, including the right to enter a government office at will and to use the part of the road normally reserved for the emperor. The importance of music in the Han was such that nobles were buried with instruments, like the set of six niuzhong bells buried with a marquis in 59 B.C. and dug up in 2015. A prince of Chu, in the Western Han (206 B.C.- A.D. 9) was entombed with earthenware sculptures of three female musicians, who played the classical instruments sheng and qin along with chimes, and two female dancers, one of whom is seemingly enraptured in her dance, bent in an ‘S’ shape with long sleeves flowing.

The concept of China itself was also codified during the Han, and the exhibition contains a gilt-bronze mirror that uses the characters for Zhongguo, or Middle Kingdom, and an inscription that reads “May the Central Kingdom be peaceful and secure, and prosper for generations and generations to come, by following the great law that governs all.”

Importantly, the Han Dynasty was also a period of considerable ethnic and cultural diversity, as is amply demonstrated by the priceless ceramics, sculptures, textiles, paintings, jewelry, metalwork, architectural models and other items on display at the Met. Indeed, this cultural diversity within a unified China, the benefits brought by expanding contact with the outside world along the Silk Road and maritime routes, and the significance given to artistic expression – of multiple forms from multiple peoples – are key themes of the exhibition.

To be fair, diversity and cultural absorption did not start in the Han. One of the most spectacular pieces in the exhibition is a Qin sculpture of an acrobat, found near the First Emperor’s tomb. It is, alas, headless, but so anatomically correct otherwise, with bulging belly and ripped arm muscles, that it calls to mind Greek sculpture – and, indeed, curators speculate that it was inspired by Hellenistic sculptures introduced to Central Asia by Alexander the Great. But the bulk of the exhibition is devoted to the Han Dynasty and it is in Han objects that one can see the strongest evidence of cultural communication and proof of its powerful impact.

A lamp “in the shape of a foreigner,” as the caption puts it, depicts a curly-haired man with a high-ridged nose; the lamp itself is unique in that it has chains and is meant to be hung, a style associated with the Mediterranean and previously unknown in China. A fluted stone column with dragons and inscriptions is believed to reveal the influence of the Mauryan Empire in India and its renowned King Ashoka, who lived in the 3rd century B.C. and carved edicts onto columns which were spread around his empire.

Several of the works reflect appreciation for the lifestyle and arts of nomads to the north, like an incense burner with a camel on it and four exquisite weights used to hold down the mats upon which nobles rested (chairs were only introduced to China over the Silk Road in the third century); the weights are made of silver, gold, and gemstones and depict animals locked in combat. Although the rhinoceros was almost extinct by this time, a realistic gilt bronze rhino sculpture was found in the richly appointed tomb of Liu Fei, prince of Jiangdu (169-129 B.C.). The animal is accompanied by a rotund groom with non-Chinese features. A lidded silver box with a fluted water-drop pattern is the subject of debate. Some scholars believe it is from Persia, or Persian-influenced, while others argue it is Chinese made and reflects the influence of northern nomads. In either case, concludes the catalog, the box “illustrates the creative and confident manner in which the Chinese adopted foreign styles.”

President Xi in 2016 added "cultural confidence" to the list of "three confidences" propagated by the Communist Party. We can only hope that this cultural confidence remains rooted, like that of the Han, in a cultural cosmopolitanism that values the contributions of all ethnic groups that make up China, and of the diverse foreign cultures, and people, who have become part of the fabric of modern Chinese civilization.

Sheila Melvin is a newspaper columnist. Her latest book, Beethoven in China: How the Great Composer Became an Icon in the People's Republic, co-authored with Jindong Cai, was published by Penguin Books.