By Zheng Lichun, An Limin and Fran Wang 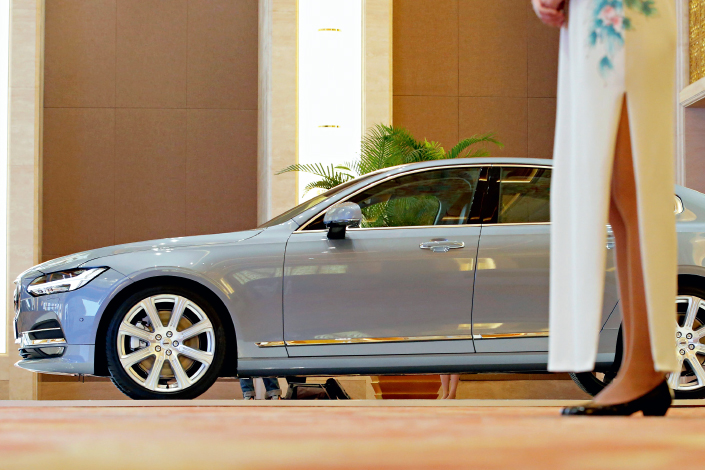 A hostess stands next to a Volvo S90, which is displayed at a panel discussion about self-driving cars at Diaoyutai State Guesthouse in Beijing, China, on April 7, 2016. Photo: Visual China

(Beijing) – In June 2002, a U.S.-bound shipment of 252 compact sedans made by Tianjin Automobile Industrial Group Co. Ltd. was hailed in China as a landmark achievement.

However, a Chinese media investigation later revealed that Tianjin Automobile’s low-cost Xiali cars would not be sold in the United States at all, but through an American distributor to buyers in South America, the Caribbean, and Africa.

That was as close as any Chinese carmaker has gotten to the passenger vehicle market in the United States, a share of which has long been coveted as a cachet of product quality and a country vital for growing brand equity.

Fifteen years on, Chinese auto companies are still clinging to their collective American dream. They are trying new strategies to crack the nut, taking lessons from previous failures and counting on more sophisticated technology and business development skills acquired during a recent boom for the Chinese market, the world’s largest since overtaking the United States in 2009.

China’s indigenous brands have long relied on low pricing – at the cost of quality and reputation – to compete at home and abroad against powerful rivals from Europe, the United States, Japan and South Korea.

Sales of home-grown passenger vehicles exceeded 10 million units for the first time in 2016, up 20.5% from the previous year, according to CAAM.

The upturn has helped boost Chinese company finances as well as self-confidence. Now, they’re more eager than ever to penetrate the U.S. market.

No one expects an easy go.

“The U.S. has the world’s strictest standards (for cars),” said Zhao Fuquan, head of the Tsinghua Automotive Strategy Research Institute (TASRI) and a former Geely vice president in charge of research and development. “Getting a share of the market is like being approved by an industrial guru.”

Geely’s U.S. effort dates to 2005, when the company sent 12 sedans to the U.S. state of Virginia for modifications. The work was aimed at laying the groundwork for sales of 5,000 cars in the United States by 2008. But that dream was never realized.

John Harmer, a former California state senator who was then serving as chief operating officer at Geely’s U.S. unit, said in March 2006 that the cars’ engines had a “major problem,” so that they would fail to meet U.S. emissions standards.

Geely’s 2010 takeover of Volvo Cars from U.S. automaker Ford Motor Co. and the synergy building through the following years injected new life into the initiative.


In October, Geely unveiled a new, high-end crossover called the Lynk & CO 01 and announced plans for exporting the Shanghai-built vehicle to the United States after launching European sales in 2019. It’s based on a Volvo Cars Compact Modular Architecture (CMA) platform.

“The CMA platform has targeted the U.S. market since the very beginning, when it was being planned,” an executive with Geely’s research and development department, who declined to be named, told Caixin. “U.S. standards have been applied [in the designs for] Lynk’s airbag and its braking system.”

Geely President An Huicong sees the grabbing of European and U.S. market-shares as a litmus test for any auto company’s competitiveness.

“Geely now has the conditions both in terms of software and hardware [to win U.S. market share] as Geely and Volvo are in all-around cooperation,” An said at the Lynk launch event in Berlin.

GAC also aims to begin selling vehicles in the United States in 2019. Plans call for exporting its Trumpchi-brand cars with assistance from a foreign partner.

The Trumpchi marque was launched in 2010, and the latest models were displayed in January at the North American International Auto Show in Detroit.

GAC President Feng Xingya told the Bloomberg news service in January the company hopes to build a network of U.S. dealers with help from Italian-American Fiat Chrysler Automobiles (FCA), with which it manufactures Jeeps in China. FCA has not commented on Feng’s statement.

GAC spent years paving the way for its U.S. push by raising consumer interest in the Trumpchi brand through stunts that were unusual for Chinese firms. For example, in 2014 the company’s GS5 sedan was featured in the Hollywood blockbuster “Transformers,” and last year advertisements for the GS7 SUV appeared on electronic billboards in New York’s Times Square.

In an apparent gesture aimed at wooing the U.S. administration of President Donald Trump, GAC has even flagged a willingness to produce vehicles in the United States if exports reach a certain level. The company has also announced plans for a research and development center in Silicon Valley to help its vehicles conform to U.S. standards.

Pulling ahead of other Chinese companies in the race for an American foothold has been auto and battery maker BYD Co., which took an unconventional path by selling electric buses. Buyers of the company’s buses have taken advantage of U.S. government subsidies for new-energy vehicle purchases.

BYD built an electric bus manufacturing facility and a battery plant in Lancaster, California, and last year won a $72 million contract to supply 85 buses and commuter coaches for the Antelope Valley Transit Authority. Other U.S. customers include the Long Beach Transit Board and the Los Angeles County Metropolitan Transportation Authority.

But BYD’s breakthrough may be hard to duplicate, experts say. One reason is that it takes a long time for any vehicle manufacturer new to the United States to understand and apply U.S. regulations for new-energy vehicles.

“I’m not sure whether Chinese firms would have the patience and capability to research the rules one by one,” said a source familiar with BYD’s U.S. marketing tactics. “In addition, the operating environment in the United States is sophisticated and highly competitive. Companies must spend a long time getting used to and handling that.”

Meanwhile, auto industry analysts remain cautious about whether Chinese automakers can build market share in the United States. They warn that complying with American standards is extremely complicated and costly. Indeed, the costs of compliance may well outweigh the benefits of breaking into the market.

“The U.S. safety standards system is highly delicate, with rules applying to roads, vehicles and pedestrians,” said Wu Jian, executive vice president at GAC’s Automotive Engineering Institute. “That means the number of regulations and preparations for testing car makers face while developing a vehicle are exponentially higher than those in China.”

He added that some safety tests common in the United States tied to safety standards have yet to be introduced in China. For example, China does not test whether pillars for a vehicle roof are strong enough to protect passengers during a rollover.

Under U.S. rules, Wu said, automakers must prove that every part in a vehicle neither affects human health nor the environment. Not only is that a complicated task, since one vehicle alone typically contains about 20,000 components, 90% of which are made by suppliers, but it’s costly to meet that safety standard since all tests must be performed by accredited laboratories.

The U.S. market is also a minefield for Chinese companies accustomed to a domestic regulatory environment that has stringent manufacturing controls but rather lax enforcement of rules.

Any non-compliant issue or flaw with a vehicle discovered during random tests by a U.S. government or industry group could lead to a recall, hefty fines and a public relations disaster.

Toyota Motor Co., for example, had to recall more than 10 million vehicles worldwide in 2009 and 2010 after reports of unintended accelerations tied to sticky gas pedals or caused by floor mats interfering with gas pedals. The company in 2014 agreed to pay $1.2 billion in criminal penalty after a U.S. investigation of the problem. The previous year, Toyota was ordered by a federal judge to settle with its customers by paying a combined $1.6 billion to make up for decreased car values.

Even if Chinese companies can pull off the technological modifications needed to comply with American standards, the price they have to pay could deplete profits and render all efforts financially meaningless, other experts say.

For example, it costs about 4,000 yuan ($588) per unit to adjust an airbag to meet U.S. standards, a source close to Geely told Caixin. That’s more than twice the average 1,491 yuan-profit for a single, Chinese-brand vehicle in March, according WAYS, a consulting firm based in Guangzhou.

Said one industry source: “What Chinese car makers need to consider is whether it’s worthwhile to invest huge amounts of financial and human capital to comply with U.S. standards, just to sell several hundred vehicles in the U.S. market, where competition is fierce.”