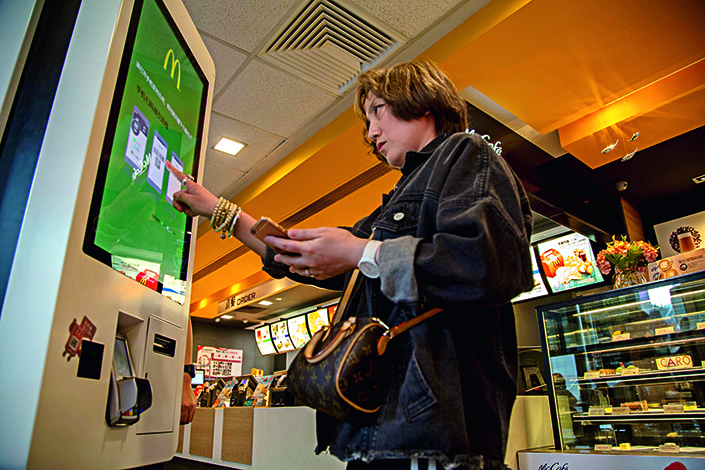 A fast-food customer places an order at an electronic kiosk, which allows payment through WeChat.

(Beijing)–For hundreds of millions of Chinese people, opening the messaging app WeChat is an indispensable daily routine. It puts them only clicks away from chatting with friends, reading the headlines, making a restaurant reservation and buying goods and services.

Created in 2011 by social networking and online gaming giant Tencent Holdings, WeChat has evolved from a mobile-based text and voice messaging app into a super platform linking users with a vast array of services. It’s changing people’s everyday lives and the way business is done.

At the same time, WeChat is feeling growing pains. Management needs to keep rolling out new functionality to ensure continued revenue growth. The Chinese company increasingly is bumping up against tech giants Apple Inc. and Google Inc., fierce competitors known for pushing back hard. And as merchants use the app to conduct e-commerce, WeChat is coming under pressure to police transactions, although that is largely a regulatory gray area.

“Almost every week, there are people coming to headquarters to complain or ask for compensation,” said a Tencent staffer. Many of those appearing at WeChat’s home base in Shenzhen, Guangdong Province, are consumers who bought fake products or believe they were otherwise cheated by vendors on WeChat, the staff member said.

Since March 2016, WeChat has handled 35,000 user complaints about content involving marketing of counterfeit products. It has punished 32,000 personal account holders by demanding that they delete certain content or by closing the accounts, the company said.

WeChat’s growing role in commerce is one of the ways the app has spread into every aspect of daily life by adding new features such as content publishing, payment and wealth management. Every move WeChat makes is seen as a bellwether for China’s tech market and triggers heated discussion.

“Whatever WeChat does, people try to interpret,” one former Tencent executive said.

WeChat accounted for 29% of time spent on mobile apps on an average day in April in China, or 900 million hours, according to a report published in late May by Mary Meeker, a partner at Silicon Valley venture capital firm Kleiner Perkins Caufield & Byers. That was far more than other domestic social networking rivals including Tencent’s instant messaging service QQ and Sina Corp.’s Weibo, the Chinese version of Twitter.

WeChat has been building its enormous ecosystem from bits and bytes. In 2012, WeChat began offering official accounts, also known as public accounts, in addition to personal accounts. Holders of official accounts may be individuals or corporations. These accounts allow owners to publish content on the platform and provide services such as allowing customers to check their bank bills.

By the end of 2016, 12 million official accounts were registered. Many of them have become important advertising and customer service platform for businesses.

In August 2013, WeChat released WeChat Pay, a payment service operated by Tencent’s Tenpay. The service soon took a piece of the online payment market that was dominated by Alibaba Group’s Alipay. The service enabled WeChat to cooperate with more third parties to offer users access to various services such as car hailing, bike sharing and food ordering.

Analysts see every new function released by WeChat as a test in its search for sustainable profit sources. According to Tencent’s financial report, the company’s advertising revenue from WeChat and other social networking services grew 67% to 4.4 billion yuan in the first quarter, about half of Tencent’s total online ad revenue.

By embedding promotional information in articles that can be shared by WeChat users, official accounts have been the main advertising platform. But catching users’ attention has become increasingly difficult as the volume of content on WeChat has boomed. According to information provider Host Internet Technology, just 4.6% of articles produced by WeChat’s official accounts during the first quarter were viewed by readers.

In an effort to distribute information in a more targeted way, WeChat in May added two new functions allowing users to search information published on the WeChat platform and receive article recommendations based on their interests. Analysts said the new functions signaled that Tencent has ambitions to challenge search engine giant Baidu Inc. and China’s top news aggregator Toutiao, which is backed by Alibaba.

Although a WeChat staff member said there is no intention to compete in search and information aggregation, the new functions are seen as key elements in WeChat’s business strategy. Zhang Yi, CEO of internet information provider iResearch, said WeChat must keep rolling out new products such as the search engine to help maintain growth in ad revenue.

With great fanfare, WeChat in late 2016 unveiled its “mini-program” function, which operates like apps on Apple’s iOS and Google's Android operating systems but doesn’t require downloading. Business operators have been counting heavily on the mini-app function as it offers an easy and instant way for users to access business services through WeChat.

Fast food chain KFC allows customers to place orders through WeChat mini apps with its 5,000 restaurants nationwide. KFC said it receives an average of 35,000 orders daily through the mini apps. Shanghai Pudong Development Bank said about two million users have visited the bank’s mini app in WeChat since it launched in January.

E-commerce operators see huge potential in the nimble mini-apps and expect Tencent to add more functions. But many analysts said this new business will push WeChat toward more direct competition with Apple and Google as it eats into the operating system business.

There are already signs of escalating competition between WeChat and iOS. In April, WeChat shut down a tipping feature on its iOS version that allowed users to tip content providers with small amounts of money. This came shortly after Apple asserted that user-to-user tips count as in-app purchases, of which Apple takes a 30% cut.

“WeChat is already capable of running an operating system,” given its huge user base and broad selection of services, said a mobile market source. In 2016, Apple reported that its iOS system had 1 billion active users.

Although Tencent Chairman Ma Huateng said in May that WeChat is not a direct challenger to the dominant mobile platforms, many analysts believe competition will be a natural trend.

Apple and WeChat “both have a huge ecosystem, and they will increasingly cut into each other’s territory,” a source close to Apple said.

The growing capabilities of WeChat are important to a large number of small e-commerce companies and individual merchants. According to iResearch, e-commerce transactions on WeChat--including products marketed through official accounts and deals between individual vendors and buyers--totaled at least 328.8 billion yuan in 2016.

Compared with large online shopping sites such as Alibaba’s business-to-consumer Tmall and consumer-to-consumer Taobao, e-commerce deals at WeChat are difficult to monitor because many of them are carried out through private chats.

But WeChat has become an increasingly popular marketplace and test ground for e-commerce startups as China grows into the world’s largest e-commerce market, with 5.16 trillion yuan in 2016 sales.

By adding purchase links to products related to original stories and video clips promoted to subscribers of its official account and mini-app, Shanghai Yitiao Network Technology Co., established in September 2014, has achieved daily sales of 2 million yuan, according to company founder Fan Zhixing.

Zhang Huaming, president of a garment retailer with hundreds of brick-and-mortar stores, said encouraging staff to promote products and set up contacts with customers through WeChat has boosted sales 20%.

As business has flourished, complaints about counterfeit products and consumer fraud have climbed. While seeking to respond to the complaints, Tencent sources argue that WeChat is a messaging and social networking platform, not an e-commerce platform. It provides communication and payment tools but can’t monitor details of private transactions.

But some internet experts said technically it would be feasible for Tencent to detect and monitor texts and pictures transferred through WeChat. If certain programming is engaged, the system could be able to detect suspicious vendors and products, these experts said.

“Technically, most counterfeits can be identified by the system,” said an e-commerce expert who declined to the named. “It is just a question of whether or not the platforms want to spend resources on it.”

Xue Jun, a law professor at Peking University, said that although WeChat doesn’t profit directly from e-commerce deals, it does benefit from other businesses linked to the deals, such as its payment service. WeChat should thus be held accountable for transactions on its platform, the professor said.

Under China’s current law on the protection of consumer rights, consumers can ask online platforms for compensation if their rights are violated. But China still lacks an e-commerce law clearly defining the responsibilities of internet platforms.

Tencent’s Ma, one of China’s richest entrepreneurs with $31.3 billion according to Forbes, addressed the issue in March during the annual meeting of the National People’s Congress. He said the lack of clear regulation makes it difficult for social networking platform operators to police e-commerce practices.

“If there are clear regulatory measures in place, we will definitely cooperate,” Ma said.