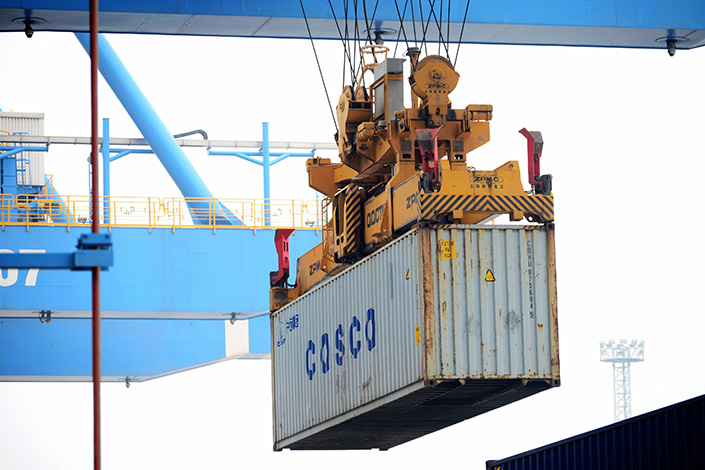 (Beijing) — China’s largest shipping company is buying stakes in two more ports, one in Shanghai and the other in Spain, as it seeks to further diversify its conglomeration of business operations.

Shanghai International Port operates the public terminals in the Port of Shanghai, the busiest container port in world with a shipment volume of 37 million twenty-foot equivalent units last year.

The deal follows a partnership that COSCO secured with the Shanghai municipal government on Friday to promote cooperation among shipping and port industries to increase Shanghai’s standing as an international shipping hub.

A COSCO employee told Caixin that the deal will improve the company’s port-operation capabilities. It will also expand its portfolio in upstream and downstream sectors, including shipbuilding, shipping, port operations, and logistics, according to COSCO’s website.

In addition to Shanghai International Port, COSCO’s acquired a 51% stake in Noatrum Port Holdings SLU in Spain for $227 million.

Cocso began buying European ports as early as 2004, when it took 20% ownership of the Antwerp Gateway in Belgium, and accelerated the pace of its purchases after the debt crisis broke out in 2009 that put some ports under financial difficulties. COSCO’s European port assets include Piraeus Terminal in Greece, Euromax Terminal in the Netherlands, and the Port of Zeebrugge in Belgium.

COSCO is not alone in the trend of closer ties between shippers and ports. France’s container ship giant CMA CGM SA in April partnered with Indian infrastructure developer Adani Ports for a new port in that Asian country, while America’s APL manages eight ports in the U.S., and in East and Southeast Asia, according to its website.