By Liu Fang and Han Wei 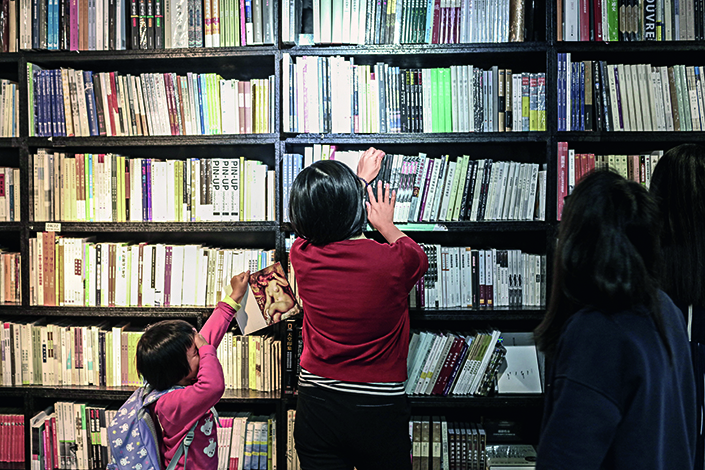 Readers look for books in the Monsoon Bookstore in Shanghai on April 23. After failing to renew its lease, Monsoon will close its last branch in January. Photo: IC

A farewell note on the entrance to one of Shanghai’s most popular independent bookstores made many passers-by freeze in their tracks.

“If one day I have to leave, let all those shining thoughts come back to me for one last time,” it read.

Monsoon Bookstore, or “Jifeng,” located inside the Shanghai Library subway station, has been on a roller coaster ride since it opened in 1997. It has survived several near-death experiences amid stiff competition from online booksellers and e-books. It had also acquired a reputation as a “temple for literary pilgrims.” Its eccentric owner — a philosophy scholar — selects each title with care and frequently chats with customers about the theories of Habermas or the latest translation of Tolstoy.

So what is really killing the indie store? The deathblow came in the form of a notice from its landlord, the Shanghai Library, saying it won’t extend Monsoon’s lease after Jan. 31, 2018 because “the city government has tightened regulations on the use of state-owned property.”

When asked whether the bookstore was scouting for another location, manager Yu Miao said only, “A new life may emerge during the process of death.”

Reaction on social media to the possible loss of this iconic bookstore was both immediate and damning. Many mourned the “imminent closure” of a venue that allowed them to discover high-quality but inaccessible books through reader word-of-mouth long before the books took the literary world by storm. Others pointed their fingers at greedy landlords and the sky-high rent they extort from retailers as a factor that may prevent a reincarnation of the store. Indeed, eight branch stores folded, starting from 2010, after rents were hiked. Its flagship store was forced to move out of the South Shaanxi Road subway station in Shanghai’s hip French Concession in late 2012 after the previous landlord insisted on a tenfold increase in rent.

But a few others noted that authorities may have become weary of the independent venue, which had hosted over 400 cultural events and 150 lectures on topics that included poetry, literature and politics since it moved to the venue owned by the Shanghai Library. The lively gatherings had attracted over 100,000 participants, Yu said.

Monsoon announced its closure on April 23, on the 20th anniversary of its opening. On the same day, the Shanghai government unveiled a raft of measures to support brick-and-mortar bookstores and promote diversity in the publishing industry through subsidies and preferential tax policies.

Independent bookstores had been making a comeback in Shanghai even before the government decided to throw this lifeline. Since late 2016, about 20 booksellers have either already set up shop in the city or have announced plans to do so. This includes another famous indie chain, Sisyphus Bookstore, which opened four stores in the country’s financial hub last year.

“Monsoon may possibly breathe its last just when spring was coming to the independent booksellers,” Yu said.

Several other privately run bookstores have been elbowed out of China’s booming metropolises in recent months. In Beijing, two stores that had operated just outside Peking University for nearly a decade and that had specialized on academic publications shuttered in May after their respective landlords pushed up rents. In Jinnan, the capital of Shandong province, the city’s first 24-hour bookstore, Reading Island, folded in late April after years of bleeding money.

Independent bookstores started to mushroom in China in the late 1990s, nearly two decades after its economy opened up and foreign literature was allowed to enter the country. Monsoon was part of the first wave of famous indie stores that included All Sages and Guolinfeng in Beijing, Sisyphus in Guizhou, and Xianfeng in Nanjiang. They helped diversify the country’s dull book market, which had long been controlled by state-run chains like the Xinhua Bookstore.

“Since the 1990s, the intellectual circle (in China) has diversified along with the reforms and economic liberalization. The changing political and economic environment (created space) for our bookstore,” said Yan Bofei, a former philosophy scholar from the Shanghai Academy of Social Sciences, who left his academic job to open Monsoon in 1997.

Yan grew up during the decadelong social turmoil of the Cultural Revolution from 1966 to 1976, when books, especially Western literature, were hard to find. The tall, lanky academic, with wisps of white hair falling on his shoulders, said he could sense readers’ pent-up demand for good books unleash after the country opened up in the late ’70s.

And his hunch was right. With two partners in tow, he opened his first outlet in a 41-square-meter room inside Shanghai’s South Shaanxi Road subway station in 1997, and a year later they expanded it to 900 square meters.

One factor that pulled readers to Monsoon was Yan’s assiduously curated book recommendation lists, which featured titles such as Max Weber and German Politics by Wolfgang Mommsen, and On Western Terrorism: From Hiroshima to Drone Warfare, by Noam Chomsky, which were absent from many mainstream best-seller lists.

In the store’s introduction booklet, Yan wrote it was a place with “an independent cultural stance that allows the free expression of ideas.”

It was this openness that made book lovers rally around it when Monsoon was first in the eye of a storm in 2008. That was when its landlord threatened to increase the rent tenfold for its flagship store. The public launched a campaign with the slogan “There shouldn’t be just Häagen-Dazs in subway stations, but also Habermas.”

“People tried to save the bookstore not because they wanted a place to buy books. It’s because Monsoon has become a spiritual and cultural home for Shanghai residents,” said Xu Jilin, a history professor at East China Normal University and a longtime customer.

Public support helped the bookseller secure another three-year lease at a discount rent for its underground store at the South Shaanxi Road metro station.

Loyal customers were slowly rallying around the store again. “If a city has no bookstore, it will be like a place with no flowers or fruits,” said one customer, who stayed hours in the store and spent 7,000 yuan ($1,020) on books on April 23, the day the closure was announced.

“In this room, we are far away from the noisy reality. I am waiting for you to come back,” wrote another in a card left on store counter.

The store moved to its current location in the Shanghai Library subway station in 2013 to cut costs. That was when Yu, an e-commerce entrepreneur, joined Monsoon’s management and tried to diversify the business.

Selling coffee instead of books?

Part of the problem was stiff competition from online retailers who have quickly cornered the book market beginning in 2007, said Jiang Li, general manager of Shanghai’s largest bookstore chain, Shanghai Bookstore. The growth of mobile-based e-commerce sites has made the competition even worse, he added.

Online booksellers such as JD.com, Dangdang.com and Amazon.com have won book buyers with cheaper prices and convenient delivery services. Meanwhile, readers were increasingly turning to their smartphones, tablets and e-readers for convenience.

In 2016, online book sales totaled 36.5 billion yuan, and for the first time surpassed sales of brick-and-mortar stores, which stood at 33.6 billion yuan, according to Beijing-based publishing industry information provider Open Book. Another research on the country’s reading habits by the China Academy of Press and Publication found Chinese adults were reading less. In 2014, an adult on average read about four physical books every year — the least in the world — and the figure was down from over five books in 2009. It also found that 58% of daily reading was done on digital platforms.

Faced with dwindling sales, several indie bookstore owners have been trying to diversify their business by turning them into cafes or fashion boutiques, they told Caixin. The Mix Place, on Hengshang Road in downtown Shanghai, has created a small exhibition space showcasing art and also runs three boutiques in neighboring buildings selling designer clothes and artwork. Store manager Linghu Lei said the business was also planning to open a restaurant.

“We are trying the build the new business model combining the bookstore and the boutique, to link readers and fashion consumers,” Linghu said. Currently, book sales accounted for about 60% of the store’s total monthly revenue.

Yu from Monsoon also had big plans to open a science lab for children and a film club in his store. But it’s not clear now whether these ideas will ever see the light of day.

“Monsoon has witnessed the ups and downs of China’s publication industry and how its marketplace for ideas has evolved,” one of its recent microblog posts read. “But it is still like a ship lost in the ocean, unable to find a safe harbor to dock.”