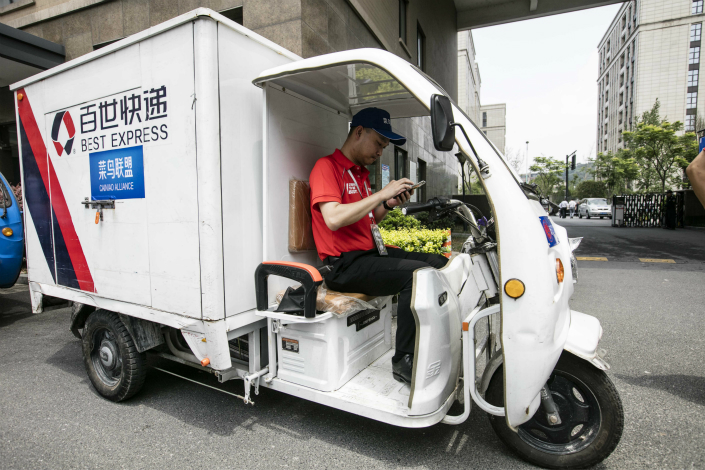 Logistics firm Best Inc. has filed for New York initial public offering that would be this year’s largest U.S. listing by a Chinese firm. Above, Zhou Jian, vice president of Best Logistics and general manager of Best Express, delivers parcels during a promotional event in June 2016 in Hangzhou, Zhejiang province. Photo: IC

Logistics firm Best Inc., whose largest backers include e-commerce giant Alibaba, has filed to raise up to $750 million in a New York initial public offering (IPO), in what would become the largest listing this year by a Chinese firm in the U.S.

Best, which is 27% owned by Alibaba, announced the plan in a prospectus filed with the securities regulator in the U.S. Founded in 2007, the company offers logistical services including supply chain management and express delivery.

But the company has lost money in each of the last two years, including a 1.4 billion yuan loss in 2016 that surpassed the previous year’s loss of 1 billion yuan. In this year’s first quarter, the company lost 423 million yuan, slightly more than the 404 million yuan it lost a year earlier.

“If we are unable to achieve profitability, we may have to cut down the scale of our operation, which may impact our business growth and adversely affect our financial condition and results of operations,” Best said in a section of the prospectus, filed Monday, that discussed its profitability.

Best said it is in good position for growth due to China’s exploding e-commerce market, which was worth $2.8 trillion last year and is expected to reach $5.8 trillion by 2021. Chinese are among the most enthusiastic people in the world to embrace e-commerce, as traditional brick-and-mortar retailing is far less established due to the country’s socialist past that lacked major national chains before the 1990s.

A new IPO would make Best the second major Chinese logistics firm to list in New York. Last year ZTO Express raised $720 million with its listing in October. But the shares have gyrated widely since then, and now trade about 26% below their IPO price.

A successful listing would make Best’s IPO the largest so far this year by a Chinese company in New York. One of the year’s only other offerings came from China Rapid Finance, a peer-to-peer lender that raised a modest $60 million in April. The shares initially jumped, but later gave back most of their gains. They are currently trading slightly above their offering price.

Another group of financial technology companies, also known as “fintech,” are also lining up to make U.S. listings this year, including Hexindai, Ppdai and Qudian, sources previously told Caixin.