By Pan Che and Zhang Xin 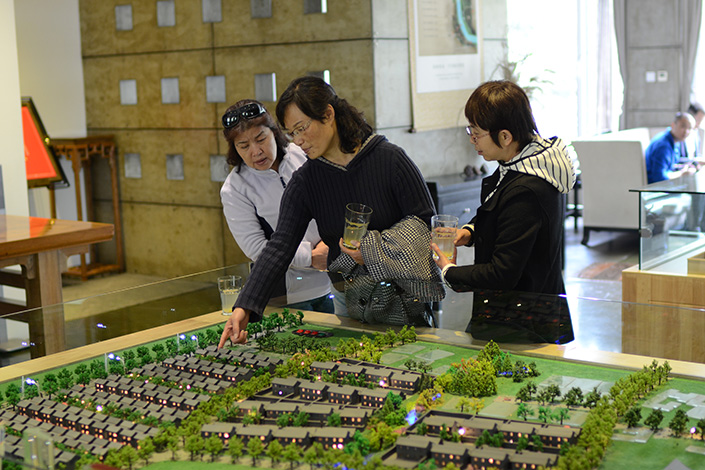 The government of Beijing has eased permitting rules to allow real estate developers to sell more units before completing construction on residential projects. Above, prospective homebuyers look at a model of a residential development in Beijing’s Shunyi district. Photo: Visual China

(Beijing) — The Beijing city government is encouraging developers to speed up construction on housing projects and move them faster onto the market, as part of an effort to stabilize housing prices by increasing the supply.

In its latest move to curb soaring housing prices, Beijing decided to give developers an incentive to hurry projects along by issuing more of what are called presale permits – permission to sell a portion of units in a residential project before construction has been completed.

Previously, a developer in Beijing could obtain one presale permit when a project’s construction reached a certain point. Under the policy change, developers of 389 projects are able to get as many as two permits, which means they can sell many more units early.

The Beijing Municipal Commission of Housing and Rural-Urban Development, the city’s top urbanization and housing development planner, issued the new policy on Wednesday.

The government’s thinking is that increasing the supply of homes on the market will help rein in rising prices.

Since October, Beijing has been rolling out measures aimed at property speculators who have been driving up prices. For example, the city government has tried to increase the supply of housing by auctioning off more land.

It also tightened requirements for purchasing homes to discourage speculators from owning multiple properties, and also made it more expensive to take out home mortgages.

Many other cities in China have been taking similar actions since President Xi Jinping in March said, “Homes are for living in, not speculating on.”

Data suggests that Beijing’s policies have at least slowed the growth in home prices. The average price of a new home in the capital grew 14.6% year-on-year in May, down from 17.4% in April.

On a month-on-month basis, new-home prices were unchanged from April to May. And the data doesn’t reflect the loosened policy for presale permits because it hadn’t been issued yet.

The Beijing Municipal Commission of Housing and Rural-Urban Development said 389 residential housing projects — including those with multiple buildings — will benefit from the policy change.