Gansu’s Mogao Caves: Desert Sanctuary a Millennium in the Making 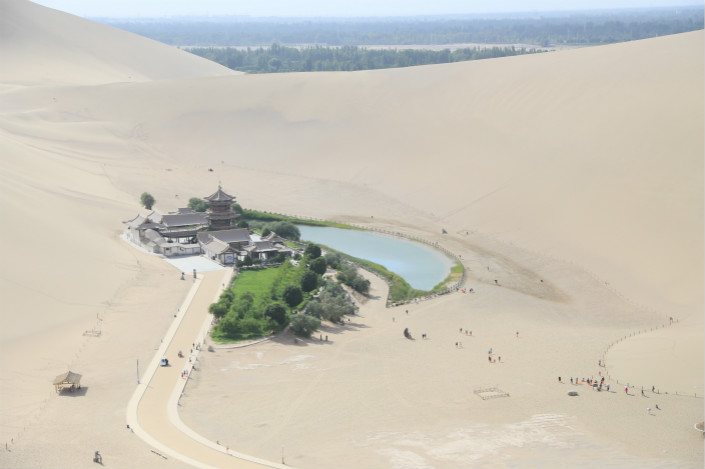 Known to locals as the “First Lake Under Heaven,” the fresh water Crescent Moon Lake is believed to have existed for more than 2,000 years.

Buddhism came to China in many waves and through many routes. It brought not just a philosophy, but a cultural milieu of art, sculpture, festivals and literature.

Nowhere is the influence of these different strands of Buddhism on Chinese art more visible than in the Mogao Caves on the edge of the Taklamakan Desert in northwestern China.

Devout Buddhists began building the intricate complex of caves in the fourth century. Construction peaked during the Tang Dynasty in the seventh century, before it petered out 700 years later in the turmoil of the Yuan Dynasty. The desert provided the perfect retreat for believers to focus and practice their faith. The 735 caves that remain today present the largest collection of Buddhist fresco art and provide insight into the lives of the monks who lived there.

When China’s President Xi Jinping announced the “One Belt, One Road Initiative,” what sprang to mind was a dusty stretch of asphalt heading east out of the city of Dunhuang, Gansu province. I was there in 1998, biking under the hot sun with endless, tanned desert stretching out to both sides of me. About 5 kilometers (3 miles) from the city, small mounds began to interrupt the rolling, sandy surface. I kept riding my motorbike, without a soul in sight. Occasionally, a giant tour bus rushed past, briefly towering over me before heading off down the road.

It dawned on me that the mounds on the side of the road were nameless tombs — thousands upon thousands of them — extending as far as the eye could see.

As I later learned, this cluster of tens of thousands of tombs dated back more than 1,500 years to the Northern Wei Dynasty. They are known as the Xindiantai Ancient Tombs, but no sign marked the site. Perhaps that’s the drawback of having a world heritage site — the Mogao Caves — as a neighbor.

For the rest of my life, I have remembered the 25-kilometer journey to the Mogao Caves as we rode among the dead. It also marked the beginning of my exploration of the Silk Road.

No photos or history books can prepare a person for the Mogao Caves. After riding through the desert, the trees lining the entrance seemed greener than I expected, and the notion that a group of monks would choose to live out here was even more unbelievable.

The Mogao Caves were built over a span of more than 1,000 years. Their construction paralleled the development of the ancient Silk Road. When the Silk Road began to decline in importance as a trade route linking Central Asia and China, building of the caves ceased.

For hundreds of years thereafter, the Mogao Caves lay silent until a Taoist monk, Wang Yuanlu, started a private cleanup effort at the caves. In the process, he discovered a hidden cave containing 50,000 scrolls of Buddhist scriptures. The story that followed reads like a Hollywood movie, with most of the items stolen or sold for cheap to Western explorers or collectors. Among the collectors, British archeologist Aurel Stein was credited for the large collection of Mogao art held in the British Museum today.

The frescos in the earlier caves, still with aged pigment, struck me as similar to Edvard Munch’s famous painting “The Scream,” or Vincent van Gogh’s “The Starry Night.” Although the paintings in the caves evoke very different emotions, the fluidity of the daring strokes and the expressive emotions leapt off the wall.

Moving among the caves was like walking through 1,200 years of Buddhist art history. The caves initially served only as a place of meditation for hermit monks, but they later developed to accommodate the growing population of worshipers.

Today, the Mogao Cave ruins are clearly divided into a northern section and a southern section. The southern section is the one that most visitors get to see, and it was where the religious activities took place, hence all 487 caves there are filled with religiously themed frescos and statues. The northern section was mostly used as living quarters by the monks. The caves in the north were equipped with kitchens and lampstands, among other things.

During the Tang Dynasty, when the Silk Road was most important overland trading route in the world, the nearby town of Dunhuang became a major trading center, while the Mogao Caves became an important religious site.

The camel caravans along the Silk Road carried with them not just tea and silks, but also cultural influence. The frescos and statues mostly tell Buddhist stories, or those of the temple sponsors. In a few caves in the late Tang Dynasty, there were images of the Huihu people — the ancestors of today’s Uighurs in China. Their facial features look strikingly Caucasian.

The harsh sun, sand, wind and the fear of death that assailed me that day were only a small taste of what those earlier worshipers had to endure. One can only imagine the harsh conditions that the builders faced, meticulously painting and sculpting every little detail in the middle of the desert. It occurred to me that the desert, originally considered a curse, may have ended up being the caves’ protector. They survived because of the desert’s remote location and dry climate.

Totally taken by the caves, I went back to Dunhuang and hunched over history books for two days. Then I took the bus back out to the caves. This time, I ran into the same curator who guided me on my first visit. He said he was going to visit a nun out in the desert that day. I begged and pleaded to join him, and he let me tag along.

We walked, this time, through the desert. The half bottle of water I brought along dwindled fast; the path in the desert seemed to be leading nowhere. Then finally, we arrived. Surrounded by sharp rocky cliffs, a tiny structure housed a large statute of Guanyin, the Buddha of Compassion. The Guanyin sits on a platform about 1 meter (3 feet) above the ground. The stature is 3 meters tall, and its head nearly touches to the ceiling of the small room.

The nun, Wang Shifu (Master Wang), greeted us. Her wrinkled hand, browned by years under the desert sun, extended me a ladle of cold spring water. Nothing had tasted better in my whole life.

I later learned that the temple is called Guanyinjing, or the Well of Guanyin. It is rare to find a water source in the desert, so worshipers believed the well was a miracle, and that its water possessed magical healing properties. That’s how the temple came into being.

In the mid-1980s, two brothers rebuilt the temple. The brothers’ surname was also Wang, so I wondered if Wang Shifu was related to them. Apparently after the year 2000, this lonely temple was further expanded. A tourism development company built a 38-meter-tall Buddha statue nearby, and paved a highway to connect the temple to the Mogao Caves, covering the 7 kilometers that I walked in 1998. Tourists now have to pay 20 yuan to visit. Imagining the shining new Buddha, I still prefer the lonely old structure I saw.

On the day I hiked through the desert, I knelt in front of the Buddha and felt quite at peace. Maybe one simply has to confront the harshness of the desert for long enough to go through the changes inherent in the journey — from “Oh, it’s too hot,” to awe, to finally being subdued by nature. Beaten down by the sun and thirst, the oasis and the well water become life-saving. Meeting the Buddha at this moment was pure serendipity. I admired those like Wang Shifu, who gave up their creature comforts to come and face themselves in this harsh environment every day.

At that moment, I understood why people built the Mogao Caves. Out in the desert, you simply become one with nature, not above it. I now wonder, if the Belt and Road passes by the Mogao Caves, what will be traded on this new route? As a traveler, I am eager to find out.

How to get there:

To get to Dunhuang, there are regular, three-hour direct flights from Beijing, and eight-hour flights from Shanghai that stop over in Xi’an.

You can also visit Dunhuang and the Mogao Caves as part of a longer Silk Road journey. There are regular, 2½-hour flights from Xi’an, allowing you to start by spending a day or two enjoying the sights and sounds of the Silk Road’s terminus. You can then continue along the trade route to the cities of Turpan, Urumqi or Kashgar in the Xinjiang Uyghur Autonomous Region.

Dunhuang offers a range of accommodation, from four-star hotels to backpacker hostels. If you can, find a place to dine outside so you can listen to the roar of the wind over the dunes — what Marco Polo called the “rumbling sands.”

The Mogao Caves will be at the top of your to-do list, and you can easily spend a whole day exploring them.

After you’ve fallen in love with Mogao, there is still plenty more to do in the area. Spend some time in the Taklamakan Desert and bargain with one of the local camel herders for a ride to Crescent Moon Lake, a small oasis amid the sand. Known to locals as the “First Lake Under Heaven,” the natural fresh water lake is believed to have existed for over 2,000 years.

If you’ve got the time, the Yumenguan pass, an ancient gateway to Dunhuang is also worth a visit. Located at the westernmost extension of the Great Wall, the pass was originally built to protect the city from invasion. Later, it became an important trading post along the Silk Road. Every caravan, merchant, trader and horse traveling to Dunhuang had to pass through it. Today, only the small, square fortress remains, but remnants of the Great Wall can be spotted in the distance.

Dunhuang’s night market is the perfect place to get a taste of the local cuisine. Slurp a bowl of Lanzhou lamian, Gansu province’s signature noodle dish, and enjoy your meal served up alongside an engaging slice of local life.

If you are looking to dive deeper into Gansu, head south to the Danxia landform in the city of Zhangye, where tectonic activity has created a unique, multicolored topography.