By Wang Qionghui and Song Shiqing 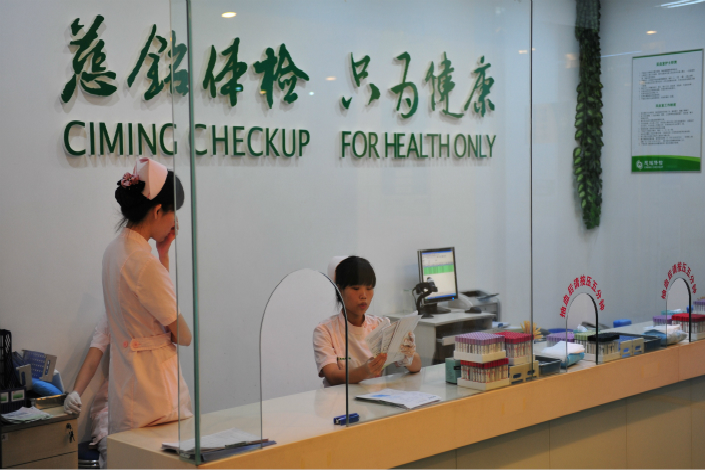 (Beijing) — The once-delayed consolidation of China’s private preventive health care market looks set to resume now that authorities have given the nod to an acquisition involving two of the market’s biggest players.

China’s securities regulator has approved the acquisition by Shanghai-based health-checkup chain Meinian of its Beijing-based rival, Ciming, one year after the takeover was stopped by a rival’s anti-trust complaint.

In 2015, Meinian Onehealth Healthcare Holdings Co. Ltd. bought a 28% stake in Ciming Health Checkup Management Group Co. Ltd., which had agreed in 2014 to allow Meinian to acquire 100% of its shares in several stages.

The acquisition process ground to a halt in March 2016 after iKang Guobin Healthcare Group submitted a complaint to the Chinese government. The complaint asserted that Meinian’s takeover violated China’s anti-monopoly law.

On Thursday, Meinian said the China Securities Regulatory Commission had approved a revised acquisition plan that it had submitted in June. Under the new plan, Meinian will buy the remaining 72% of Ciming’s shares for 2.7 billion yuan ($398 million), including 350 million yuan in cash.

Once the purchase is complete, Ciming will become a wholly owned subsidiary of Meinian, though the two companies will continue to operate independently.

Ciming will focus on the Beijing market, and Meinian will concentrate its business on smaller and less-expensive third- and fourth-tier cities.

Ciming plans to get out of the physical examination business and turn to prenatal checkups and the application of big data technology in the health care industry, a source close to the deal told Caixin.

Meinian has been involved in a long-running dispute with iKang since 2015, when Meinian led a consortium in a takeover bid for the Nasdaq-listed iKang. IKang CEO Ligang Zhang later called the offer “hostile and malicious.”

In March 2016, iKang filed another lawsuit, this time accusing Meinian of intellectual property infringement related to its medical examination software.

With nationwide network of medical centers, Meinian, Ciming and iKang are the three biggest players in China’s booming private preventive health care market, which has been growing quickly, thanks largely to government support. In September 2015, China launched a national drive to support private medical services to take pressure off state-run public hospitals.

Consultancy Frost & Sullivan has forecast that China’s private preventive health care market will be worth 300 billion yuan by 2020, a sixfold increase from 2014.

The source close to the deal predicted that the market could become monopolistic in the future due to the extreme similarity of the services offered by the three companies, such as disease screening and gene sequencing.

Meinian might not give up its attempt to acquire iKang, and a deal similar to the Didi-Uber merge in China could possibly occur in the future, the source said.

Meinian has reported fast revenue growth over the past three years, including a 50% year-on-year increase in 2016. Ciming reported its net profit jumped 21.5% year-on-year to 124 million yuan in 2016.