By Fran Wang and Li Yuqian 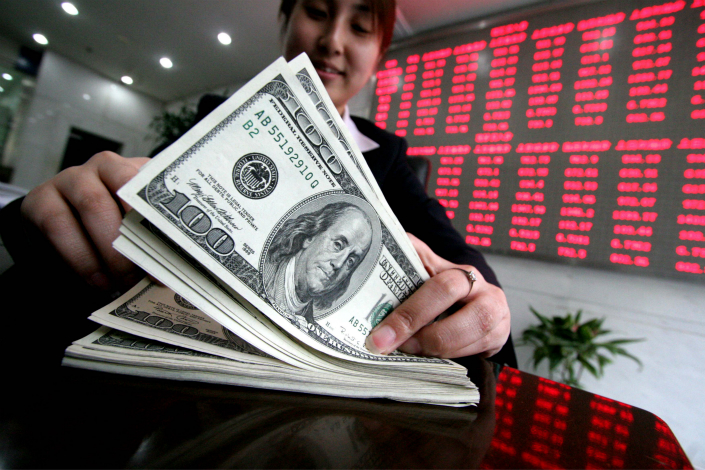 The People’s Bank of China sold 34.3 billion yuan ($5.1 billion) worth of foreign currency to banks in June, the first time the figure has increased in seven months. Photo: IC

(Beijing) — Foreign-exchange sales by China’s central bank, a number that helps investors gauge capital flows and pressure on the yuan, rose in June for the first time since November.

The People’s Bank of China (PBOC) sold 34.3 billion yuan ($5.1 billion) worth of foreign currency to banks in June, up from sales of 29.3 billion yuan in May, marking the first time the figure has increased in seven months.

The sale left the central bank’s outstanding foreign-exchange purchase position at 21.515 trillion yuan, down from 21.55 trillion yuan in May.

A decline in the total indicates pressure on the yuan to weaken as companies and individuals preferred to hold foreign currency rather than the yuan, or to move assets overseas, which increases capital outflows.

“A fall in the PBOC’s forex purchase position means banks were selling less foreign currency” to the central bank, said Xia Tianran, an analyst with CEBM Group, a subsidiary of Caixin Insight Group. “It normally points to possible depreciation in the yuan. Sometimes the fall is due to an increase in imports, which means companies’ demand for dollars increases.”

“There is an indirect impact on capital flows, so it can be a good indicator to watch,” Xia said.

Some analysts attributed the increase in the PBOC’s foreign-exchange sales in June to an increase in demand for foreign currency by Chinese tourists traveling abroad during the summer holiday season.

“China runs a trade deficit in the services sector, which is one important reason for the decrease in the forex purchase position,” Zhao Yang, an economist with Nomura International, said on a conference call with reporters on Tuesday. “Tourism accounts for the biggest share in trade in services. The deficit caused by Chinese people’s overseas traveling is huge.”

Volatility in the forex purchase position data has been moderate in the past few months, suggesting capital outflows have continued to ease and have become “much slower” than in 2015 and the first half of last year, Zhao added.

The PBOC’s position for forex purchase has been falling for 20 straight months, although the size of the drop has varied from month to month. In the three months to November 2016, the PBOC sold 988 billion yuan of foreign exchange to buy yuan from banks as sales of the domestic currency surged and capital outflows ballooned amid fears economic growth was slowing and the yuan would continue to depreciate.

Since then, the pace of central bank sales has fallen as the authorities tightened supervision on foreign-currency transactions and outbound investment by companies to stem the outflows. Sales were just 106 billion yuan in the second quarter of 2017, half the level of a year earlier.

Xia said he was not worried about the widening in June’s forex purchase fall. “The dollar is expected to remain weak this year. So there is no need to be overly concerned about the depreciation pressure on the yuan,” he said.

China’s foreign exchange reserves have risen for five consecutive months, reaching $3.057 trillion at the end of June, according to PBOC data, after falling below what analysts widely believe is the central bank’s psychological comfort level of $3 trillion in January for the first time in nearly six years.