By Luo Ruiyao and Song Shiqing 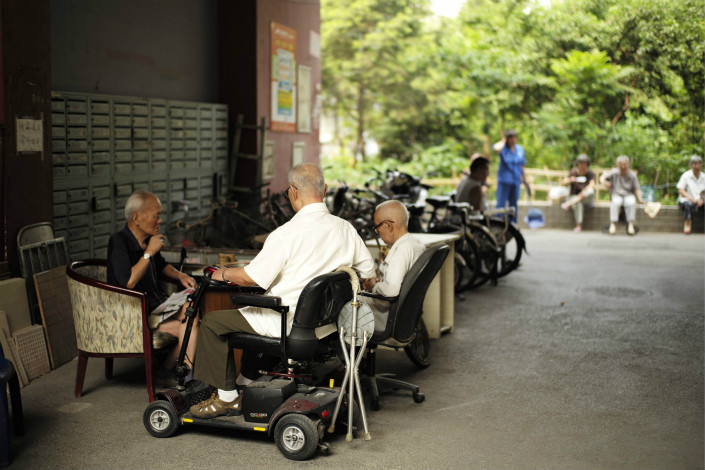 While China has issued new guideline to hasten the development of pension-related products and services offered by commercial insurers, many experts say workers still don't have enough incentives to purchase such products. Photo: Visual China

(Beijing) — As China turns to commercial pension insurance to patch holes in its welfare system, experts question whether there are enough incentives to encourage people to buy private retirement plans.

China issued new guideline on July 6 to speed up the development of pension-related products and services offered by commercial insurers.

“The government will build a well-regulated commercial pension insurance system by 2020, which will play a key role in retirement plans of individuals and families,” according to a statement by the State Council, China’s cabinet.

The move comes as the deficit in the state-run pension fund has continued to widen in recent years and as China’s dwindling workforce braces itself to support an aging population. These guidelines encourage the public to buy commercial pension insurance, which can offer “an effective supplement” for the government’s public pension system, said Yuan Xucheng, head of the personal insurance department at the China Insurance Regulatory Commission.

But others say commercial pension insurance is unlikely to take off despite this latest revision of the rules, for a host of reasons.

First, the replacement rate, or the extent to which a future insurance payment can compensate one’s current salary, is much higher in the state-backed program compared with most private retirement plans.

For example, a 2014 report by the Sichuan Daily newspaper cited the example of one policyholder who paid a one-time premium of 100 yuan ($14.80) in 1989 for a commercial pension insurance product that promised a monthly payment after the beneficiary’s 60th birthday. But after two decades, he got a pension payment of only 1.8 yuan each month. In 1989, 100 yuan was equal to two months’ salary, but 1.8 yuan today isn’t even enough to buy a bus ticket.

Another major hindrance is that many commercial pension plans have extremely low returns compared to bank deposit rates, reducing the attractiveness of such products. For example, online financial service provider 7min.com told Caixin that according to its recent survey, the average annual rates of return on many major commercial pension insurance products in China are lower than bank interest rates for a one-year deposit.

Employers also automatically deduct a part of one’s salary for the state-backed pension fund, so many might see a commercial pension plan as an extra cost and may not be able to afford it. The product range for commercial insurance is also narrow, limiting investment options even for those who can afford it.

Currently, China’s commercial pension insurance industry is very small and in its infancy. Last year, only 17 million people, or just 1.2% of China’s population, purchased policies that promised them a pension, said Huang Hong, vice president of the China Insurance Regulatory Commission (CIRC), according to the official English-language China Daily newspaper.

To encourage people to purchase pension-linked policies, the new guidelines have ordered the insurance regulator to start a pilot program by the end of the year that will allow policyholders to defer tax payments. This means beneficiaries don’t need to pay taxes until they receive the pension payment after they retire. It would also reduce the current income tax burden on payees by deducting their premium payment from their taxable income.

However, this proposal will have little influence on people’s purchasing decisions for now, said Dong Keyong, dean of the school of public administration at Remin University. But the public will gradually understand and become more willing to buy private retirement products, he added

Hu Jiye, a professor with China University of Political Science and Law, said the tax-deferred policy means little for most people given the low awareness levels. He cited a survey by Stanford University on 41 million respondents globally, which shows only 15% were sensitive to tax preferential policies.

The guideline also encourages commercial insurers to “invest part of their money in government-run pension funds and participate in the management of these funds.” But the policy document didn’t offer details on how insurers could play a role in managing parts of the state pension pool.

Developing commercial pension insurance is a crucial step in the government strategy to establish a comprehensive pension system that is jointly covered by the government, employers and individuals, the CIRC’s Huang said.

The government-run pension fund system has been suffering from anemic rates of returns, with annual yields edging up only 3.1% from 2009 to 2015. The system is managed by provincial governments and the National Council for Social Security Fund, established by the central government.

Six provincial-level areas reported pension fund deficits in 2015, when they paid out more than they received in contributions, according to the 2015 China Social Security Development Report. The northeastern province of Heilongjiang reported a deficit as high as 10.6 billion yuan in 2014, according to a report by the Chinese Academy of Social Sciences, a government think tank.

China started allowing provincial pension funds to invest in the stock market in hopes of generating higher returns in December. As of March 31, 137 billion yuan had been received, the Ministry of Human Resources and Social Security said in April.