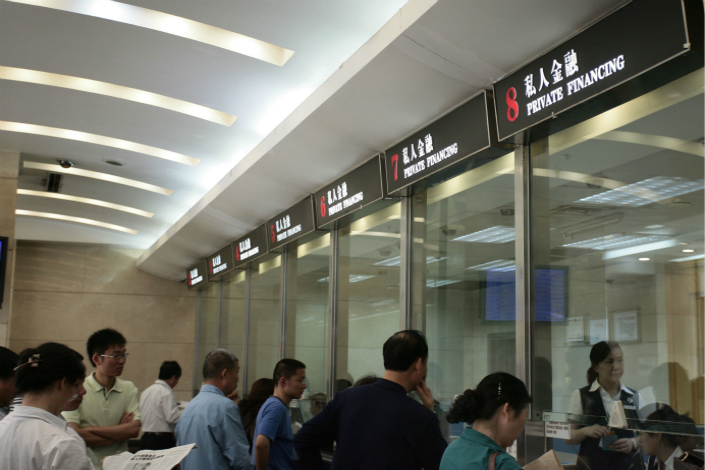 Nonperforming loans (NPLs) in China’s banking system could reach 1.7 trillion yuan ($252 billion) by the end of this year, according to an estimate by one of the country's four state-owned asset management companies. Photo: Visual China

More businesses in China may be unable to repay their bank loans in coming years as the economy slows while the government steps up its deleveraging campaign, according to a state-owned asset management company (AMC) that absorbs toxic assets from banks.

Nonperforming loans (NPLs) in China’s banking system could reach 1.7 trillion yuan ($252 billion) by the end of this year, up from 1.51 trillion yuan as of the end of 2016, according to an estimate by China Orient Asset Management, one of the country’ four national state-owned AMCs.

NPLs are expected to climb until 2019 at the earliest, China Orient said. In the coming year, they will be concentrated in manufacturing, wholesale and retail, real estate, mining and construction sectors, as the government continues to undo the easy credit that has fueled these sectors in recent years, China Orient said.

However, as new loans continued growing, NPLs as a ratio to the banking system’s entire loan book is set to fall slightly to 1.7% by the end of 2017, from 1.74% a year earlier, China Orient predicted.

During the first half, new credit — including bank loans, bond and equity issuances, and trust and entrusted loans — stood at 11.17 trillion yuan, up 1.36 trillion yuan from the same period in 2016, according to the central bank data.

The central bank said in a report last year that some lenders might have understated the amount of NPLs by at least 50%. It suggests that distressed assets at these commercial banks could be as much as 4 trillion yuan.

The massive discrepancy in the estimates of NPLs is in part due to how banks classify the risk level of their loans, China Orient added. On the balance sheet of Chinese banks, in addition to NPLs, is a category of “special mention loans,” referring to loans that have been flagged because of doubts over future repayment but may not default. China Orient estimates up to 30% of these loans will end up being classified as NPLs this year.

AMCs should also consider other approaches in disposing of banks’ NPLs, China Orient said. Debt-for-equity swaps, which allow AMCs to convert debts to equity of the companies that cannot pay back their loans, has been heavily promoted by the government. Premier Li Keqiang is considered a major champion of this debt-relief method. But China Orient said this tool has limited effectiveness, as equity holders may not necessarily have the expertise to manage companies and may struggle to exit their investments.

Earlier this year, bank creditors rejected a restructuring plan by China Railway Materials Co. The creditors said the plan would erode capital adequacy, as they need to set aside additional capital to cover risks associated with the equities swapped from debt.

As China started allowing provincial-level regions to set up second AMCs in October, smaller regional AMCs are taking on a bigger role in helping banks dispose of distressed assets.

In addition to the four state-owned, national AMCs — China Orient, Cinda, Huarong and Great Wall — there are now 35 smaller regional AMCs as of March, according to a report from management consulting firm McKinsey & Co.

Although the national ones have licenses that allow them to operate a wider range of businesses and have more experience in handling toxic bank assets, the regional ones have the advantage of being closer to local governments and financial institutions, China Orient said.