Guangzhou SOE to Partner With LG in $6.7 Billion Display-Panel Plant 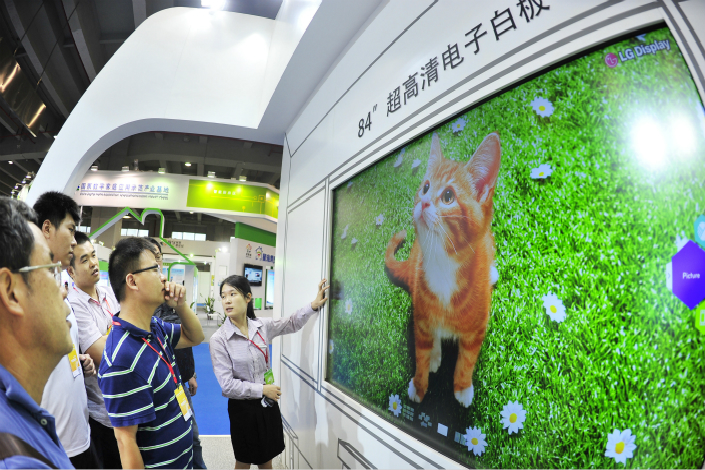 LG has announced it will build a facility to produce large-panel organic light-emitting diode displays in Guangzhou, Guangdong province. Above, an LG employee displays an 84-inch interactive whiteboard at the Guangzhou Pazhou International Exhibition Center in Guangzhou in August 2013. Photo: Visual China

The South Korean home-appliances giant announced Tuesday that it will build a facility to produce large-panel organic light-emitting diode (OLED) displays in Guangzhou’s Economic and Technological Development Zone. LG’s official announcement said it was providing 70% of a 15.7 billion yuan ($2.33 billion) investment in the factory, but did not specify who will provide the remaining amount.

The project will eventually involve a total investment of about 45 billion yuan, or $6.7 billion, people close to state-owned Guangzhou-Kaide told Caixin. The display panels will be used in TV screens and electronic billboards, LG said.

While the factory will be LG’s first large-panel OLED facility outside of South Korea, it will not be the first cooperation between that country and China. Set up in 1998 to operate the Economic and Technological Development Zone, Guangzhou-Kaide holds a 20% stake in LG’s existing display-panel plant in the development zone, which produces liquid crystal display (LCD) panels.

OLED panels are expected to replace LCD panels in the near future as they offer better image quality and have the advantage of being flexible and even foldable.

LG’s announcement comes at a time of rapid growth for the OLED market. In 2014, when LG first announced it was able to mass-produce OLED panels, 77,000 OLED TV screens were sold globally, figures from research firm Display Search show. By the following year, the market had expanded tenfold, with about 770,000 units sold. Display Search expects annual sales of OLED screens to reach 16.5 million units in 2021.

LG, which dominates global large-panel OLED production, said it plans to produce 1.8 million such displays in 2017, doubling its 2016 production. Larger panels are more important to LG’s business, with TV screens accounting for 46% of the company’s display sales in the second quarter, according to its latest financial report. Smartphone screens accounted for only 22%.

LG’s decision to open its first overseas large-panel OLED plant in Guangzhou shows that it is optimistic about the Chinese market, Liang said.

By 2018, China will account for 20% of global OLED TV sales, making it the world’s largest OLED market, according to IHS Markit.