By Zhang Yuzhe and Aries Poon 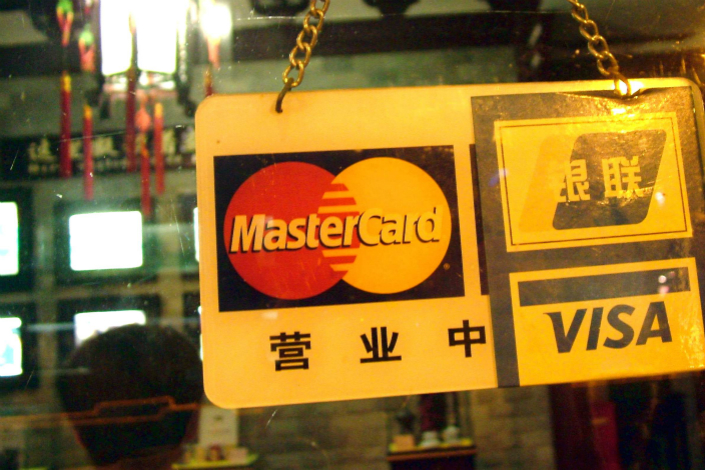 Mastercard, the world’s third-largest bank-card network operator after UnionPay and Visa, plans to roll out its QR-code-based service across Asia more aggressively in coming years as it attempts to compete with third-party payment service providers. Photo: Visual China

Bank-card network operators like UnionPay, Visa and Mastercard are preoccupied with exactly this question, while they are increasingly squeezed out by third-party payment service providers.

Mastercard, the world’s third-largest bank-card network operator after UnionPay and Visa, plans to roll out its QR-code-based service across Asia more aggressively in coming years. The rationale is clear: People no longer bring wallets, and businesses and consumers are getting more used to doing business with smartphones by scanning QR codes.

Its bigger rival, UnionPay, is betting on touch-and-go technology, however. The plan is to reroute and attract more traffic through UnionPay’s interbank fund-transfer network and to push for a wider adoption of its Near Field Communication (NFC) payment technology, known as QuickPass.

Bank-card networks are losing market share to third-party payment providers, which have been growing at an exponential rate. In China, the practice of using smartphones to scan QR codes to make payments grew 113% in the first quarter from the same period a year ago to 2.27 billion yuan ($338 million), according to consulting firm iResearch. WeChat Pay and Alipay, owned by Tencent Holdings Ltd. and Ant Financial Services Group respectively, accounted for a combined market share of 94%.

India is the only Asian country that has adopted Masterpass QR, Mastercard’s scan-to-pay program launched in 2016. The company said recently that it plans to expand to Thailand and Indonesia by the end of this year, and to Hong Kong next year.

Essentially, the consumer scans a QR code with his or her smartphone at the merchant, and then the payment is processed through the Mastercard network. More traffic, more revenues.

At the same time, Mastercard is pushing for more standardized QR-code specifications. These standards ensure consistency in QR codes both generated and captured on a consumer’s mobile phone, the company added.

In fact, Africa is one of the first markets into which Masterpass ventured. QR-code-based transactions gain ground more easily in less-developed countries because merchants are not required to buy expensive terminals or card readers, while a high penetration of smartphones enables fast adoption of scan-to-pay method, analysts say.

China is still a difficult market

Despite China’s affluence and fast adoption of mobile payments, non-Chinese card network operators like Mastercard and Visa were shut out of the country’s growing card-clearing traffic monopolized by state-controlled UnionPay until May.

Back in 2012, the World Trade Organization ruled that China was violating WTO rules by requiring all yuan bank-card transactions to be handled by the UnionPay network. It said the Chinese government should break UnionPay’s monopoly by August 2015.

But the opening-up has been slow. In June 2016, Beijing issued guidelines on what companies are eligible for providing clearing services for yuan-denominated bank-card transactions. Access wasn't granted to non-Chinese players until May.

Market-watchers warned of restrictions to expanding in China, including potentially an absence of an even playing field for foreign network operators. Working through Chinese government red tape and gaining more bank and merchant acceptance could be difficult. It will likely take a long time for Visa and Mastercard to gain significant market share there, analysts said.