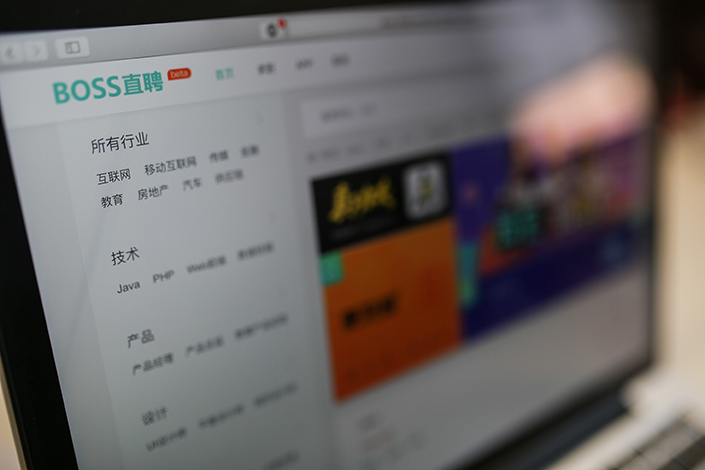 Online job-hunting platform Boss Zhipin has acknowledged that it unwittingly played a role in the death of 23-year-old Li Wenxing, who used Boss Zhiping's app to contact someone who was impersonating an employee of Beijing software company CSII. Above, the website of Boss Zhipin is seen. Photo: IC

The mysterious death of a recent college graduate found drowned months after being recruited online by an employer posing as a software company has sparked a public outcry about the job-hunting platform’s responsibility in the case.

The platform, Boss Zhipin, referred the 23-year-old man to a position at an obscure organization in Tianjin that might have played a part in the death of the graduate, Li Wenxing.

The company acknowledged in a statement that it played a role in Li’s death.

The case is just the latest death related to lax vetting by China’s internet companies, which have made screening users’ posts for false information a low priority.

After graduating from China’s notable Northeastern University, Li began hunting for a position as a software engineer, primarily through the instant-messaging app Boss Zhipin, which allows job-seekers to chat directly with potential employers. The “Zhipin” in the app’s name is Mandarin for “direct hire.”

Chatting with a recruiter who claimed to be from the human resources department of CSII, a 2,000-employee software company in Beijing, Li believed that he was a candidate for a software testing engineer.

In the wake of Li’s death, CSII released a statement that said the person chatting with Li on Boss Zhipin was an imposter, and that the company never offered Li a job.

Boss Zhipin said that its slack screening of employers was a holdover policy from its launch three years ago, when it was eager to attract employers, especially startups, to list job postings on its platform.

Companies were allowed to post one position without going through a verification procedure so long as they were listed on the nationwide company registration system. Early-stage startups could post listings with nothing more than a business card as a credential.

After a brief phone interview, Li was asked to report to the company’s offices in Tianjin on May 20. Upon arriving at his new employer’s offices, Li gradually fell out of touch except to occasionally ask for money, family and friends said.

The last time a family member heard his voice was on July 8, when Li called his mother to tell her that he had changed his cellphone number and firmly instruct her never to agree to give in to any requests for money, according to a report by local media.

On July 14, Tianjin police discovered a body floating face-up in a shallow pond on the city’s outskirts, and later identified him as Li.

The Beijing News reported that a notebook, apparently containing handwritten notes about the cosmetics products of a brand linked to a pyramid scheme, was found nearby the pond.

Tianjin police say the case is under investigation and cannot verify if Li’s death was linked to a pyramid scheme.

Although the available information looks a lot like a kidnapping, the details of Li’s case point to a style of pyramid scheme commonly found in northern China, according to Li Xu, the founder of a private organization dedicated to helping victims of pyramid schemes in China.

“These operations are defined by restricting the personal freedom (of their victims) and using torture or violence to control their members,” he said.

The activist said that young graduates, especially ones from humbler families, are prone to fall prey to such scams because they tend to trust others too easily and are eager to find a job so they can support themselves.