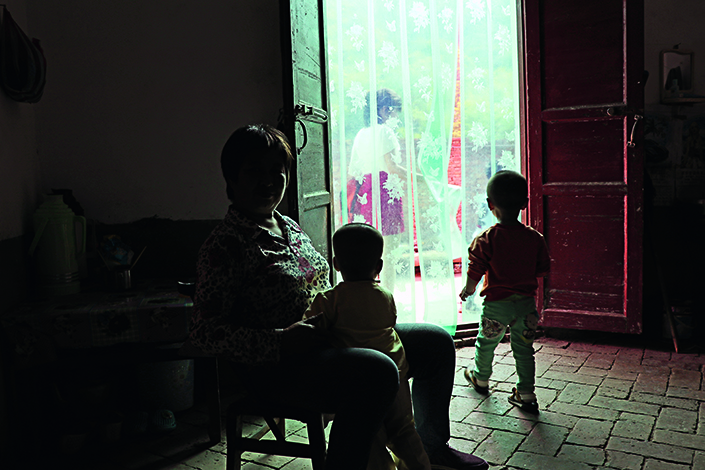 54-year-old Zhou Xiu holds her granddaughter at their home in a village in the Qinba Mountains in mid-June. Photo: Zhang Jin/Caixin

(Qinba Mountains) — Fifty-four-year-old Zhou Xiu would like to go dancing with her friends at dusk on the public square or learn calligraphy at a college for seniors like many of her peers in cities do.

But Zhou lives in a rural backwater in the Qinba Mountains in China’s impoverished northwest. She has been crushed under the double burden of farming while taking care of her 1-year-old granddaughter all alone. Zhao’s husband, two grown sons and daughter-in-law toil in a city far away. They visit her only once or twice a year.

“Day and night, I have too many things to do and to worry about,” she told Caixin. “I feel like I live for everyone else but myself.”

Zhou is among a growing number of women struggling alone with solitude, deteriorating health and poverty in China’s vast countryside that has been hollowed out by the country’s rapid push for urbanization.

More than 1 in 5 rural women show signs of depression and nearly 3% suffer from severe depression, according to a recent study by Peking University and Stanford University. In contrast, only 4.2% of the general population in China suffers from depression, which was on par with the global average.

Mental health issues among women left alone to care for a grandchild were even more acute with 1 in 3 showing signs of depression, according to the Rural Education Action Program (REAP). The study used an internationally accepted measure, known as DASS-21, to assess the severity of depression, anxiety and stress. Researchers interviewed 1,062 women including 268 grandmothers in 42 impoverished villages in Qinba, a vast mountainous area straddling parts of the northwestern provinces of Shaanxi and Gansu, as well as the southwestern province of Sichuan.

Some of the grandmothers left behind were as young as 33 years old, given that early marriage was common in some rural pockets of China. Others were in their 80s and struggling with ill health while trying to look after babies between 6 months and 2 years old.

Researchers attributed the higher prevalence of depression among these caregivers to poverty, separation from family and lack of community support in many rural communities, which have disintegrated into ghost towns amid a rapid urbanization.

An estimate by the Ministry of Civil Affairs in 2015 put the number of adult women left behind in rural areas nationwide at 47 million.

A lack of public awareness about mental health issues and community support means that many sufferers are dealing with their conditions in silence. The growing epidemic of anxiety and depression is also affecting the cognitive development of children in their care, according to academics.

In Zhou’s village, once a community of more than 3,000 residents, many people in their prime have left to work in cities. Her husband, two sons and daughter-in-law are all working in Xi’an, the provincial capital of Shaanxi in northwest China.

Zhou herself used to work as a shop assistant in Xi’an before returning home more than a year ago when her granddaughter was born because it was too expensive for a family of migrant laborers to raise a child in a city.

She had to care for the baby by herself round-the-clock and also tend the family’s farm from time to time.

Zhou only saw her husband, a construction worker, once or twice a year or when he was between jobs, she said.

She worried the most about saving enough to build a house for her second son. A new home is essential for a young man to find a wife. Zhou’s second son was already 27 years — an age perceived to be too old for the rural marriage market. According to her, a new home in her village costs between 200,000 yuan ($29,755) and 400,000 yuan to build.

People in Zhou’s village earned 8,200 yuan per person on average last year, less than two-thirds of the national average for rural residents, according to the latest figures from the National Bureau of Statistics. Meanwhile, urban dwellers in China had an average annual disposable income of 33,616 yuan.

“The more I think about these things, the more I get depressed and the less I sleep every night,” she said.

Zhou said she only heard about depression when the research team from REAP raised the issue with her, but she has no plans to seek treatment or help. She doesn’t trust the health services offered at the public clinic in her village or township and she can’t afford to go to a larger county or city hospital.

In Shaanxi province alone, the local health authority recorded 119,829 cases of people living with mental disorders including severe or chronic depression in March 2015. Over four-fifths are living in rural areas, official statistics show.

Nearly half of the counties and districts in the province don’t have a mental health clinic and there are only 64 qualified psychiatrists at community-level clinics for the province of more than 37 million people.

A 30-year-old mother from a village in Qinba, who only gave her first name, Nana, is taking care of her two boys alone. Her husband has been working in a factory in eastern Jiangsu province and earns 5,000 yuan per month.

Their second son, who was born prematurely in November 2015, suffers from asthma and anemia. The family had already spent more than 50,000 yuan last year and nearly another 10,000 yuan this year on the boy’s treatment because the medical insurance for rural residents didn’t cover these ailments.

Nana had to stay behind to raise the two boys with only her mother to help her because it’s too expensive for the family to live in Jiangsu.

“Nana often fights with me for no apparent reason or accuses me of not doing enough to help her,” Su Zhen, Nana’s mother said.

Researchers who interviewed Nana last year said she was moderately depressed, which led to her aggressive behavior.

“The women who stay back in their villages are the ones who suffer the most because they can’t just leave to work elsewhere and they are burdened by family responsibilities,” Li Jun, the wife of a local village official, told Caixin. “On top of the loneliness and stress, there are few rewards for them because they don’t earn any money.”

Many rural women left alone to take care of young children or aging parents have a strong sense of insecurity and loneliness because they have no one to turn to for comfort, according to Wang Gang, president of Beijing Anding Hospital, a hospital specializing in mental disorders.

“If they don’t receive proper medical help for a long time, they will certainly become depressed,” he said. Wang wasn’t involved in the REAP study.

Researchers found that stress and depression among female caregivers also has an adverse impact on the children in their care.

Nearly a third of the women who showed signs of depression said they had beaten their children or grandchildren when they were “in a bad mood.” But, it only made them feel worse because of the feelings of guilt that mixed with stress and frustration that followed.

By comparison, only 1 in 5 caregivers free of depression said they beat the child in their care when they felt bad.

Children living with depression-stricken custodians tend to be aggressive and ill-tempered, according to researchers. They also lagged behind others in terms of early-stage cognitive development, according to the study.

Nearly half of the children under the care of the rural women surveyed fell behind in language skills and emotional development compared with the national average for children in their age group. More than a third were slow in cognitive development.

Previous REAP studies have also shown that rural children who are mostly left in the care of grandparents lagged behind in early-stage development because the grandparents were illiterate or weren’t aware of the need to talk to or stimulate toddlers.

For example, one study tracked nearly 2,000 children from some impoverished regions in western China between 2013 and 2015. The children surveyed scored 97 on the Bayley Scales of Infant Development in 2013 when they were 6 to 18 months old, but the score slid to 94.8 a year later and was only 80 in 2015.

Children who scored less than 70, which indicated their level of intelligence didn’t match their age, accounted for only 7% of the group in 2013, but the number quickly rose to more than one-third by 2015.

Two out of 5 children aged 1 ½ to 3 ½ years in rural China showed significant delays in either cognitive or motor development, or both, due to a lack of parental interaction, according to a different REAP study conducted between 2013 and 2015.

Many education specialists fear that rural children may fall behind their peers in cities even before they enter first grade. Urban middle-class families in China expose their children to a host of activities such as music, sports, expensive summer camps and even robotics classes at a young age.

But millions of children in rural villages are left in the care of grandparents who are semi-literate. Many are also too weak to care for young children left by parents who move to cities to work, researchers said.

Zhou, the women left alone to take care of her 1-year old granddaughter, only had a few years of schooling. She said that it never occurred to her that she needs to do more than feed the baby.

“I feed her well and cuddle her when she needs me and that’s how I was raised,” she said. “What else do I need to do?”