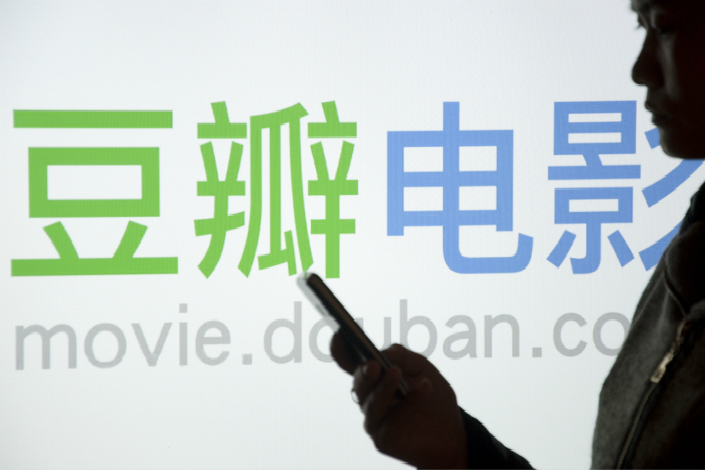 Market-watchers believe an offshore initial public offering, such as the type that Douban is reportedly seeking, could raise a company's international profile. Above, a Douban Movie logo is seen in Shaoyang, Hunan province, in March 2013. Photo: Visual China

(Beijing) — A listing of Douban, a 12-year-old Chinese homegrown social-networking website, is back on the table.

Only this time, the company is aiming at a flotation outside the Chinese mainland.

“Douban has arrived at a pragmatic stage,” CEO Yang Bo said in an internal memo seen by Caixin on Saturday. “Understanding market demand and channels helps us grow the user base, while understanding revenues and costs help us grow our business. These two simple matters are in fact the pillars of any internet company.”

Dubbed “China’s IMDb.com” for its popularity among movie- and music-lovers and bibliophiles, Douban has not been actively raising funds from the market for years. It last tapped $50 million from a group of investors led by private equity firm Trustbridge Partners six years ago. The internet company had also reportedly considered a domestic listing in China before.

Market watchers believe an offshore listing helps raise a company’s international profile, and could bypass the more-stringent profitability-related listing requirements on some of China’s bigger boards. However, an offshore listing also makes the company subject to more scrutiny from overseas investors and regulators.

As part of the preparation for the listing, Yang said in the memo, the company plans to separate the budgets of various departments starting in the second half of this year, and will shut down less-profitable operations to improve its overall cash flow ahead of a planned initial public offering (IPO). Yang did not say when the IPO will take place.

Unlike internet startups, which usually rush to seek funding for business expansion, Douban has been treading carefully about receiving investments due to its independence. With about 300 million monthly active users, Douban is also seen as the prime Chinese site of interest-based reviews on various works from poems to portraits, and is welcomed by users for its independence from content providers.

Douban’s revenue is mainly from online advertising. The platform has also expanded into ticketing services and paid-music streaming in a bid to boost its earnings. But Yang said in the memo that many earlier initiatives have failed to meaningfully boost revenues or cash.

In March, the company launched Douban Time, which charge users for listening to lectures given by notable speakers on trending topics. The company said earlier the revenues during the first five days after the launch reached 1 million yuan ($149,000).