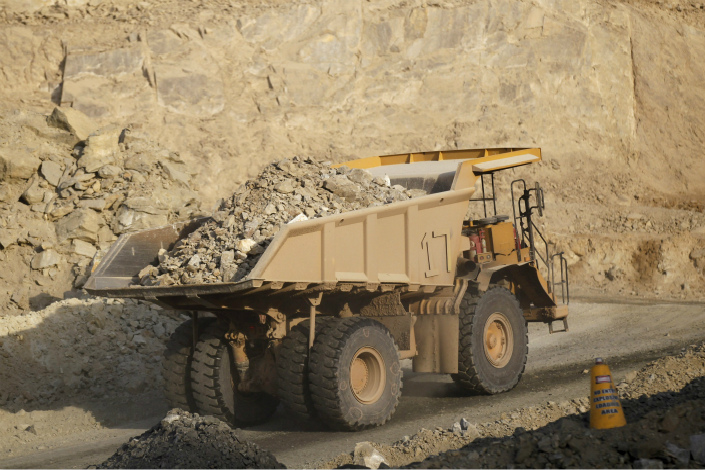 The value of China’s imports from Africa in the first six months of 2017 jumped 46%, to $38.4 billion. The imports included minerals, chemicals and agricultural products. Above, a truck carries copper ore from the mining pit at the Bisha Mining Share Co. in Asmara, Eritrea, on Feb. 18, 2016. Photo: Visual China

(Beijing) — China’s trade and direct investment with Africa have risen significantly this year, spurred on by a global economic recovery, higher commodity prices and the Belt and Road initiative.

The value of China’s imports from Africa in the first six months of the year jumped 46%, hitting $38.4 billion, according to the Chinese Ministry of Commerce. That included minerals, chemical and agricultural products. China ’s exports to Africa grew 3% to $47 billion.

Meanwhile, China’s direct investment in the continent rose 22% to $1.6 billion in the same period, ministry spokesman Gao Feng said this past week.

The growth is a reversal from declines in overall trade between China and Africa since 2015, due to global economic recovery, rising commodity prices and Belt and Road projects, said Jianping Zhang, a research fellow who focuses on Africa at the Chinese Academy of International Trade and Economic Cooperation, a government think tank affiliated with the Ministry of Commerce.

The Belt and Road, also known as “One Belt, One Road,” is a program under way to strengthen China’s relations with countries in Asia, Africa and Europe, primarily through infrastructure investment and construction.

“Supported by these various platforms like (Belt and Road), many China-Africa big infrastructure projects will be implemented very fast, which will boost Africa’s need of machinery equipment from China. And Africa’s resources and energy will in return go to China.” Zhang told Caixin.

Given that analysts predict commodity prices will rise in the near term, Zhang predicted China’s Africa trade and investment will continue to grow in value terms for the whole year of 2017.

African countries complain that China maintains a trade imbalance with them in its favor. In 2016, the whole 54 countries of Africa recorded a $35.4 billion deficit with China on total trade of $149.2 billion, according to statistics provided by the Chinese Commerce Ministry.

Some African countries are urging China to tackle the trade imbalance. In an interview with the Financial Times in May, Kenyan President Uhuru Kenyatta called on China to open its market to more than commodities.

But some analysts attribute the trade imbalance to Africa not offering much other than commodities that China wants.

“It makes sense that China and Africa try to find a way to rebalance the trade relationship. However, the reality is, on many scores, Africa doesn’t produce what China needs and it has to rely on imports from other countries for many sectors,” said Jeremy Stevens, a Beijing-based economist for Standard Bank Group.

To reduce the trade imbalance, Stevens says Africa will need to partner with China to develop manufacturing throughout the African continent. He argues this is already happening, adding that Chinese companies are some of the biggest job creators across Africa.

Research fellow Zhang notes China has been building industrial parks in Africa to attract Chinese corporations and other international partners to invest in Africa as a way to reduce Africa’s trade deficit to China. “As Chinese are investing in Africa, the products will be made there, which can be sold to the Chinese market,” Zhang said.

But, with China focusing more on countries close to the mainland, like Pakistan, in its Belt and Road projects, it isn’t clear how much headroom there is for China’s African imports and investment to grow.

For the most part, Africa is a small player in the Belt and Road initiative, Stevens said, but he sees a new trend where Chinese authorities will increasingly adopt successful models from elsewhere in Africa.