By Liang Feiying and Wu Gang 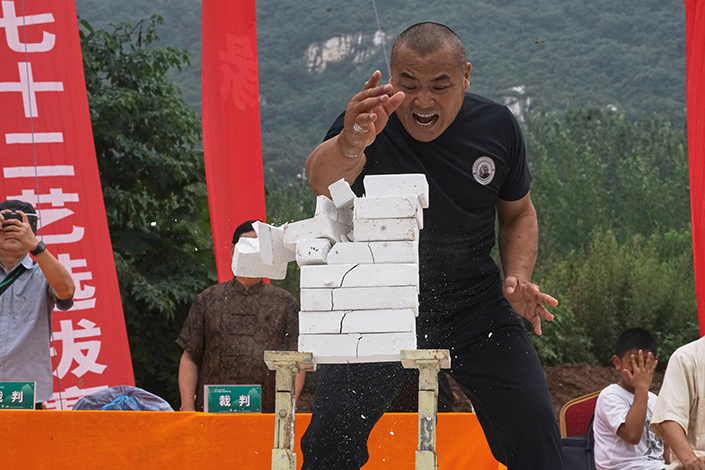 Zhang Longxiang breaks eight bricks with his hand on July 30 during a competition organized by the Shaolin Temple in Henan province. Zhang won the title of “Iron Hand champion.” Photo: Liang Feiying/Caixin

(Dengfeng, Henan province) — The Shaolin Temple, the cradle of Chinese martial arts, is fabled for its warrior monks and their stunning feats, including crushing rocks with bare hands, and flying kicks that seem possible only in movies.

The monastery, built over 1,500 years ago in the lush Songshan Mountain in central China’s Henan province, was recently in the spotlight after hosting a competition for amateur kung fu fighters.

The contest on July 30 and 31 attracted over 100 marital arts enthusiasts from China, Japan and South Korea, and made waves on Chinese social media. The competition, promoted as “the Oriental Olympics” by organizers, focused on testing competitors’ prowess in four techniques included in the 72 secret arts that a warrior monk needs to perfect to become a kung fu master. These include the “Iron Hand Contest,” in which whoever breaks the largest pile of bricks with their bare arm wins; “Flying Dagger,” which tests one’s ability to hit a target with a dagger; “Two Finger Zen,” in which people compete by doing pushups on two fingers on each hand; and “Stone Lock,” a weight-lifting competition using one hand.

Zhang Longxiang, 44, from Shandong province, won the Iron Hand competition by cracking a pile of eight bricks with his bare hands. After practicing this routine for 20 years, his right hand has developed thick muscles and calluses, which make his hand appear much thicker than an average man’s hand.

Qian Yong, from Jiangsu province, won the Stone Lock competition by lifting a 41-kilogram (90.4-pound) lock-shaped stone with one hand. The competition was not an easy one, as the participants had to flip the stone up using one hand and make it stand on top of the fist.

In most Chinese kung fu legends or fiction books, Shaolin is described as one of the major martial art schools in the country and warriors trained there are considered to have special fighting skills that can dwarf the rest of the kung fu world. This includes the ability to wield weapons like broad swards, staffs and even fans with astounding precision and speed.

A troupe of Shaolin warrior monks have dazzled audiences around the world with their acrobatic skills for years, making Shaolin a household name worldwide and its brand of fiery kung fu one of China’s most successful cultural exports.

Its mystic aura that blends aspects of Zen Buddhism with street-fighting skills has inspired factory workers, retired teachers and even some store owners in Chia to practice various kung fu skills for years, as evident from the participants who had signed up for the competition.

Compared to the tension on stage, the atmosphere was more relaxed off-stage. Participants showed off their skills while some observers livestreamed the stunts on their smartphones. People dressed in Taoist costumes preach their philosophy for a healthy way of life with some trying to stand on their fingers, but collapsing in a second, triggering peels of laughers – just like in a carnival.

Although the competition was a nationwide sensation, many participants said fewer people are devoting time to practicing kung fu, as they had to make a living through other means. A teacher at a kung fu school near Shaolin who preferred not to be named said the career paths for kung fu practitioners are limited. More than 80% of his classmates in the year he graduated became security guards, he said.