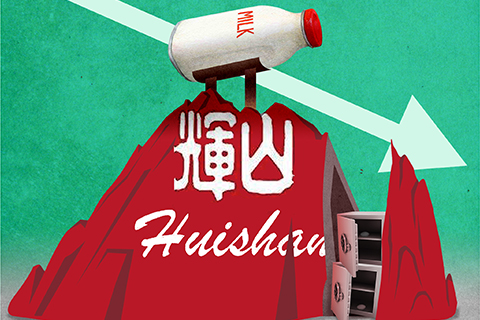 Huishan has been under the spotlight since March 24, when the company’s share price unexpectedly plunged 85% before trading was suspended. Photo: Visual China.

China Huishan Dairy, the Hong Kong-listed company mired in billions of dollars of debt, proposed to pay creditors with stock in a debt restructuring plan amid unresolved controversies over its actual financial condition.

The plan would involve creating a new company from the business and assets of Huishan together with affiliated companies controlled by Chairman Yang Kai. The new company would then seek a white knight investor. Huishan’s current management team would hold 15% of the new company with the rest to be offered to creditors.

Huishan said it expects the proposal to be accepted by at least two-third of its creditors. The plan would result in repayment of 14% to 20% of the debts, the company said.

Caixin learned from sources close to the matter that although most creditors agreed to the Huishan restructuring plan earlier this month, other creditors strongly opposed it. The critics argued that the plan didn’t address the opaque picture of Huishan’s financial situation and the management team’s role in it.

“The whole plan didn’t mention the management team’s responsibility in the company’s missing funds and allowed the team to join the new company with equity incentive. It's hard to accept,” said one Huishan creditor.

Huishan has been under the spotlight since March 24, when the company’s share price unexpectedly plunged 85% before trading was suspended. It was the largest one-day percentage drop ever recorded on the Hong Kong Stock Exchange. The company’s debt woes quickly escalated as it was late making loan payment and most of its directors quit.

Huishan said in late March that it lost contact with its vice president, Ge Kun, who suffered an acute attack of an unspecified illness. Huishan attributed missing financial records to Ge’s disappearance.

Sources close to Huishan told Caixin that an audit of the company’s financials found that about 8.2 billion yuan ($123 million) from Huishan’s accounts were transferred to companies controlled by Chairman Yang Kai between September 2016 and March 2017. But Yang said all Huishan capital transfers were managed by Ge, and the money’s whereabouts is unclear in the absence of Ge and the financial records.

Huishan said in a securities exchange filing in early June that nearly 2.4 billion yuan of cash was missing from its balance sheet.

Huishan’s messy financial picture has further fueled creditor concerns over the restructuring plan. In another June filing, Huishan said it had accumulated 26.8 billion yuan in unaudited, interest-bearing loans and contingent liabilities by the end of March.

Creditors are questioning the management team’s ability to fairly manage the new company and protect creditors’ interests, one creditor said.

A source from Shenzhen Fuhai Yintao Asset Management, Huishan’s debt restructuring adviser, said “it is difficult to figure out Huishan’s financial problems in a short time, but it is urgent for the company to find a solution.”