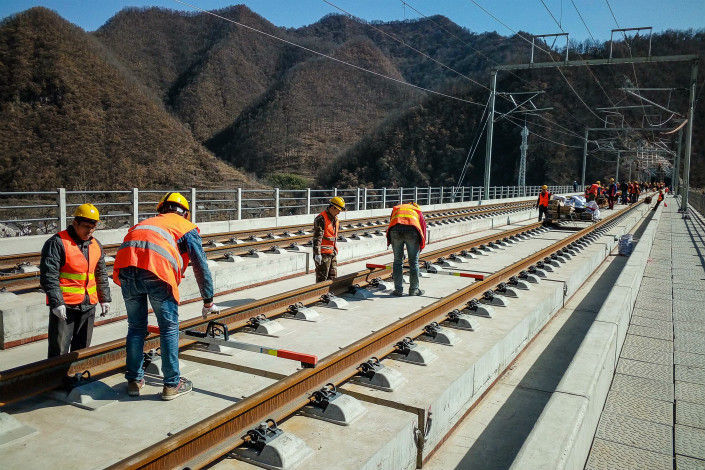 The Chinese Embassy in Thailand has announced that construction work on a high-speed railway linking China and Thailand is slated to begin as soon as October, once the two countries sign two contracts that cover design and supervision expenses. Above, a group of migrant workers from Hebei province work on a high-speed rail project in Baolan, Shaanxi province. Photo: IC

After two years of setbacks and delays, construction is set to begin in October on a high-speed railway linking China and Thailand.

The project’s first phase, a 253-kilometer (157-mile) rail line, will be the first high-speed rail line in Thailand. The Thai cabinet and National Legislative Assembly, which approved the first phase in July, estimated that it will cost 35.7 billion yuan ($5.36 billion) and take four years to complete.

The Chinese Embassy in Bangkok announced that construction work is slated to begin as soon as October, once China and Thailand sign two contracts that cover design and supervision expenses, according to a statement published on Saturday.

The two contracts will be signed during Thai Prime Minister Prayut Chan-o-cha’s visit to China on Sept. 4-5, a source at the national rail operator, China Rail Corp., told Caixin.

According to the statement, China will provide expertise and supervision, while Thailand will provide equipment and materials. China also promised to use a number of Thai engineers and architects as part of an effort to help the Southeastern Asia country master maintaining, operating and managing high-speed railways.

The first phase will link the Thai capital, Bangkok, with the northeastern city of Nakhom Ratchasima. The railway was designed to handle trains running as fast as 250 kph (155 mph). The project’s second phase will connect to the China-Laos rail line, which is currently under construction. Once complete, the project will connect China’s southern city of Kunming with Bangkok and Vientiane, the capital of Laos, by high-speed rail.

Since it was announced in 2014, the China-Thailand high-speed railway has run into several setbacks. Despite at least four announcements that “work would begin soon,” the start of construction was repeatedly postponed because China and Thailand couldn’t find their way to an agreement on financing issues.

The railway is part of China’s ‘Belt and Road’ initiative, which aims to promote the country’s investment and infrastructure along a modern silk road connecting Asia, Europe and the Middle East.

Earlier this month, China also announced a $12.8 billion rail link in Malaysia under the initiative.