By Ye Zhanqi and Song Shiqing 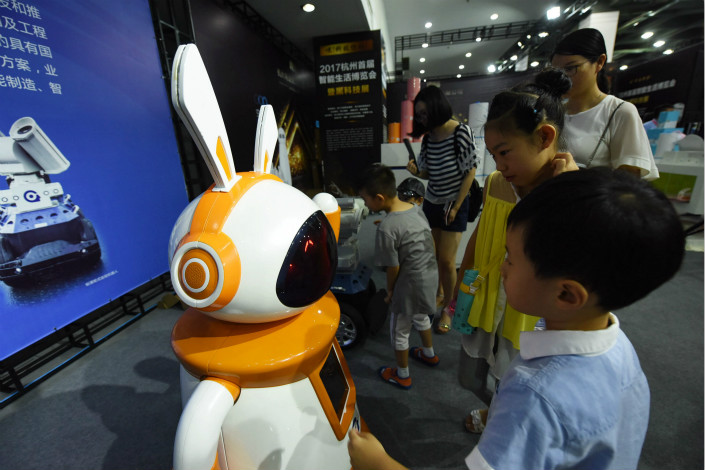 A new PricewaterhouseCoopers report says that 59 technology, media and telecommunications firms went public from January through June, raising a total of 25.8 billion yuan ($3.91 billion). Above, visitors at a technology expo interact with artificial-intelligence robots in Hangzhou, Zhejiang province, on Friday. Photo: Visual China

China witnessed an initial public offering (IPO) boom in the first half of 2017 in the technology, media and telecommunications sectors, with total fundraising surging 406% from the same period last year.

A total 59 technology, media and telecommunications firms went public from January through June, raising a total of 25.8 billion yuan ($3.91 billion), according to a report published Tuesday by auditing firm PricewaterhouseCoopers (PwC).

Specifically, 19 IPOs were completed in China’s A-share main board market, with a fundraising of 10.8 billion yuan, 41% of the total funds raised. The Shenzhen Small & Medium Enterprise Board and the Shenzhen Growth Enterprise Board saw 12 and 27 IPOs respectively.

“Though the domestic A-share market will remain the most popular choice by technology, media and telecommunications IPOs in the short run, Hong Kong and the United States markets will be more attractive for software services and internet finance firms, especially for those ‘unicorns’ that are not yet profitable,” said Zhang Yi, an audit partner at PwC China.

Unicorns are defined as private companies valued at $1 billion or more.

Within this period, 28 Chinese technology firms completed their IPOs — the most listings of any country worldwide — followed by the U.S., with 10. But in terms of funds raised, IPOs by U.S. tech firms ranked first globally, with South Korea and China following closely behind.

The IPO surge was due to faster approval by China’s securities regulator, as it processed many backlogged applications in the first half of the year, said Xu Ran, a partner at PwC China.

But the approval rate slowed recently, as the regulator strengthened the supervision and examination of companies queuing for IPOs, Xu said. On Aug. 23, the China Securities Regulatory Commission (CSRC) released a statement pledging to tighten the process by examining more strictly the eligibility of companies seeking to go public.

But Xu predicted the number of China’s new IPOs in the second half of the year will remain among the global top three, and the country will remain one of the hottest IPO markets in the world.