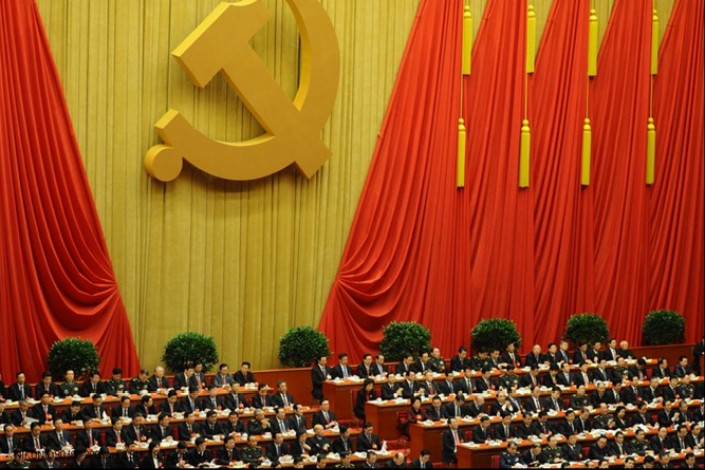 National Congress in the cutline Communist party officials attend the party's 18th national congress in Beijing in November 2012. Photo: Wu Gang
The Communist Party of China (CPC), the country’s ruling party since the end of the civil war in 1949, will begin its once-every-five-year National Congress on Oct. 18, at which time a new slate of party leaders will be elected.

In the major party reshuffle, some officials will stay in their posts; others will be elevated; and some will retire. The nation will closely watch, as the new mixture of leadership will help shape China’s future political and economic landscapes.

Here are five things to know:

Based on previous experience, right after the weeklong National Congress meeting ends, the party’s Central Committee will hold its first plenary meeting to elect a Politburo and its Standing Committee, which comprises the nation’s top leadership.

On Nov. 15, 2012, for example, the then-newly elected 18th CPC Central Committee elected 25 Politburo members, of which seven are the Standing Committee’s members. Among them are current President Xi Jinping, who is also general secretary of the party, and Premier Li Keqiang.

The elections during the National Congress and the ensuing plenary meeting may not bring in many new party officials, but will add fresh blood as some older officials retire.

Who gets to attend the National Party Congress?

The 19th National Party Congress will have 2,300 delegates, 30 more than the previous term. The party’s organizational department said the additional delegates will better represent party members from the “front line,” or the grass-roots occupations like workers, farmers and specialists of various trades.

The delegates will come from 40 electoral units, including 31 provincial units, a financial sector unit, a military unit, a state-owned enterprise (SOE) unit and a central government agencies unit, among others.

According to the party authority, the proportion of party or government officials in the provincial, financial and SOE units will be reduced to no more than two-thirds of the total 19th congress, the result of efforts to increase the ratio of grass-roots party delegates.


How are the party congress delegates picked?

The grass-roots party organizations will propose their respective candidates. The upper-level party organizations will screen the candidates and propose a list to higher-level party committees. The provincial party committees, for example, will hold provincial congress meetings to elect their delegates to the National Congress.

Political loyalty to the Communist Party is the top criteria for a candidate. The central party authority also has vowed “zero tolerance” for candidates with a record of corruption.

The election was done through secret ballots.

More than 700 provincial delegates of Zhejiang casted ballots on June 15 to elect 51 National Congress delegates and the province’s 100-strong party committee members and alternate members, according to a China News Service report.

How long can party leaders hold their jobs?

Since 1993, the Communist Party’s top leader, the general secretary, has also taken the nation’s top job as a president.

The Communist Party’s constitution does not specify how many terms the party’s leaders can serve, saying only that each term lasts five years. But the nation’s constitution says its president can serve no more than two five-year terms.

Jiang Zemin took the helm as the party’s general secretary in June 1989. Jiang was formally elected to this position in October 1992 and as Chinese president in March 1993. He handed over the two jobs to Hu Jintao in November 2002 and March 2003 respectively.

Sun Daiyao, a professor with Peking University’s School of Marxism, said it was the Chinese top leaders’ first smooth transition of power since 1949, according to an article he published in 2013 on People’s Forum (link in Chinese), a magazine run by the Communist Party’s flagship newspaper People’s Daily.

The Chinese leader followed the Constitution’s rule of serving no more than two terms as government head, and also quit the party leadership, though the party charter does not specify the limit of terms. It created a precedent in the power transition, which was strengthened when Hu also passed on the party leadership and presidency to Xi Jinping in November 2012 and March 2013 respectively, after completing 10 years, or two terms, Sun said.

How is the Central Military Commission picked?

In China, the Communist Party controls of the People’s Liberation Army via the CPC Central Military Commission. A party leader normally doubles as the military commission chairman, or the commander-in-chief of the military.

The Communist Party’s constitution says the Central Military Commission is decided by the party’s Central Committee.

The 18th CPC Central Committee named Xi the Central Military Commission chairman on Nov 15, 2012, in its first plenary session, the next day after the 18th National Party Congress elected a central committee. He became the party leader on the same day.

Two vice chairmen were also named, in addition to eight other members of the military commission, during the meeting that day.