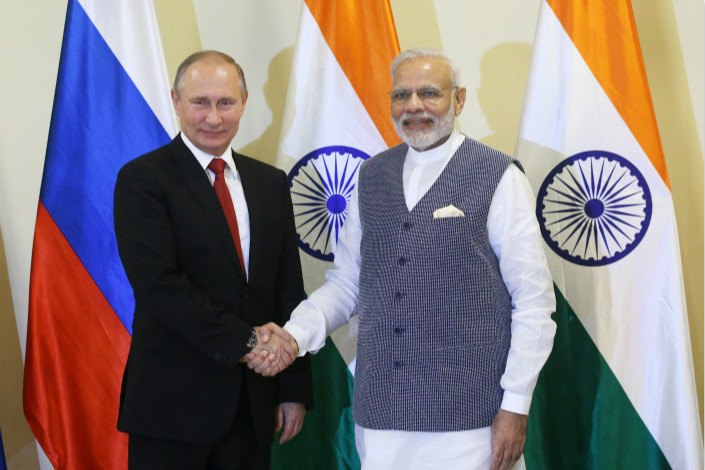 Leaders of the five member countries — Brazil, Russia, India, China and South Africa — will look for ways to deepen their cooperation so that their voice is greater on the international stage. The three-day summit will be held in the southeastern city of Xiamen.

Jim O’Neill, a former chairman of Goldman Sachs Asset Management and the former British Treasury minister who coined the acronym “BRIC” in 2001, before South Africa joined, shares with Caixin reporter Wang Liwei his views on the changes and outlook of the BRICS countries since they held the first summit in Russia in 2009. (South Africa joined the group in 2011.)

Caixin: How would you assess the situation of the BRICS countries other than China?

O’Neill: India is doing quite well, and is on target to keep rising in line with the original BRICS projections. It has a rising share of global gross domestic product (GDP), and for the next five to 25 years can in principle see a faster real rate of growth than China. It has exceptionally favorable demographics, and is finally making some tougher structural changes. (Its efforts) to reduce the scale of corrupt business practices and unnecessary bureaucracy is quite positive.

As for Brazil and Russia, they both share a simple problem — they are far too dependent on commodities. They suffer from the so-called Dutch disease, and it stops them from pursuing structural reform. This typically means that often things look much better for them when commodity prices are rising, and much worse when they are falling. They need to try to avoid this crazy cyclicality. Others have managed it. Australia and Norway are perhaps the best examples, and to my slight surprise, in recent years, Indonesia shows some signs of it. But just as people got too carried away with their positives in the ’90s, probably people get too negative now, especially about Brazil. Indeed, it is fascinating to observe that Brazilian financial markets have been among the strongest in the world for now nearly a year, suggesting to me that the Brazilian economy is set to recover.

What about South Africa?

South Africa is very small, and not important enough to affect the aggregate of BRICS. It remains true that China creates an equivalent of a whole new South African economy every three to four months. Because China dominates the aggregate of the BRICS so much, it remains the case that whether BRICS becomes bigger than the G-7 by 2037 to 2040 depends crucially on China, and to a lesser degree, India. It is already the case that BRICS is now bigger than the EU, despite Brazil and Russia. This is true for two reasons. First, Brazil and Russia’s disappointment is not much worse than that of many EU countries. Indeed, looking back 10 years at the start of the financial crisis in 2007, Brazil and Russia are bigger in U.S. dollar terms today, whereas because of what happened in many EU countries, the EU is smaller. Secondly, China has more than tripled since 2007, going from $3.5 trillion to now around $12 trillion.

India seems to have great potential in the past two to three years until its recent populist turn and bad data. Are you worried about the Modi government’s reform (its drive and capability) and governance?

I am always worried about India! In many ways, it is the most complex of the BRIC countries. I often have a different view one week from the previous week, or next. I am not so bothered about the populist turn, but I do worry that there is never any real sign of accelerating private investment growth, or dealing with the structural impediments in the public sector. These things constrain India significantly. India, because of its demographics, could easily grow above 10% a year for many years. So one should keep the negatives in perspective. It is also about 20 years behind China in terms of urbanization, and it will naturally benefit from all of this going forward still.

Yes, I think this is fair to say. It is often political and diplomatic relations that hold back genuine cooperation. It is frustrating because of the potential power of the economies. The challenges between China and India highlight so clearly this issue.

Can economic relationship between them become a sort of cornerstone for BRICS relations, as it is between the U.S. and China?

I don’t think it is necessarily so clear without a much stronger effort. The U.S. and China are the two largest economies in the world, and are likely to remain so for at least the next 20 years. And also, crucially, China is a net saver and the U.S. a net debtor, and despite all their differences, and despite (U.S. President Donald) Trump, the U.S. and China realize the benefits of co-operation. Among the BRICS countries, even though they share similarly large populations, except for South Africa, they are not natural partners in all cases. Brazil is geographically distant from all of the other BRICS countries. Russia, Brazil and South Africa are major commodity producers, while India and China are big importers. And of course, they do have quite different levels of GDP per capita despite being all officially so-called developing countries. None of these things stop BRICS co-operation, but they need to get beyond the “symbolism.” I often think some of the BRICS countries really like their BRICS grouping because it doesn’t include the U.S., and while I can understand this, they need to do something concrete to demonstrate their usefulness.

Will external factors, such as BRICS countries’ relations with the U.S., play a big role?

Of course, by definition. The U.S. will remain the world’s leading economy for at least another nine to 10 years.

China is the main driver behind the BRICS political club. What’s the key to China’s success?

Gosh, where to start! It’s China’s ongoing remarkable economic success, and despite all their huge challenges, their ability to sustain strong growth. It is very impressive, and when they announce targets, they try to achieve them. I have always given more attention to Five-Year Plans in China than anything else like them elsewhere, because — despite many problems and missed goals — they tell you largely accurately what Chinese policy is trying to accomplish. And here is one particularly special thing I like: Chinese policymakers seem to focus a lot on all the things that can go wrong! As I have said before, as early as 2010, Chinese midlevel policymakers asked me whether I was worried about a Chinese housing bubble. That made me think, “I shouldn’t worry because they would undertake policies to avoid such a bubble!” What country in the world has deliberately stopped a house price bubble before, with the possible exception of Singapore? I can’t think of any.

Is it likely BRICS can eventually match the G-7’s role on international governance?

I am not sure that this is much of an ambition. What does the G-7 actually really do these days? Three of its members — Germany, France and Italy — are all part of a common currency, with a common monetary policy and a shared overall fiscal policy framework. Why do they need to be in some group like the G-7 separately as individual countries? The G-7 was extremely important in the 1980s, before the rise of China and the beginning of BRICS in the late 1990s. But as we saw with the policy response to the 2007-08 financial crisis, we needed something more. I would say, despite its many failings and its clear bureaucracy, the G-20 is a welcome development.

What are obstacles to “a stronger partnership for a brighter future” from your perspective?

Well it is easy to say, but in reality, the BRICS countries don’t articulate this in any clear way. This is why the health example is so important, it is such an obvious area.

At the core of their current challenge is the real two big BRICS countries, China and India. They often spend a lot of time on disputes rather than co-operation. As you know, India didn’t participate in the “Belt and Road” event in May, which was clearly a snub. These two countries are both crucial to driving the world economy going forward, and therefore by definition, are crucial to BRICS trade, as well as BRICS initiatives. This is true on virtually everything.

You mentioned the purpose of the political club is to find shared issues and champion them. Besides global health, what other, more-overarching collective shared issues can there be?

I can’t think of anything bigger than this issue. If you read leading scientific magazines after we published our final AMR recommendations, some of the most prestigious said that what we were recommending were the No. 1 challenge for the world the next 20 years. Each of the five BRICS countries, especially India, South Africa and Russia, have huge problems with tuberculosis in particular, and so do to a lesser degree, Brazil and China. If they don’t deal with it, they won’t achieve my famous 2037 BRICS ambition of becoming bigger than the G-7 economies.

Beyond health, I think the other obvious area is climate change and alternative energies. Again because of China and India especially, the BRICS countries can be a genuine leader in the battle to fight unwanted climate change, but it requires active policies.

On trade, the truth of the matter is that rates of relative domestic demand growth around the world, and competitiveness drives exports and imports. Witness this fascinating development, at the end of 2016, Germany’s No. 1 trading partner, combining exports and imports, is now China! That is despite the fact that Germany is inside a free-trade area, the EU. As China grows, by definition, it will become the No. 1 trading partner for more and more countries. If the BRICS group really wants to accelerate trade among themselves, they have to have things that each other want from each other. And as I said, India and China should, and indeed, could be at the core of this.