By Li Liuqian and Song Shiqing 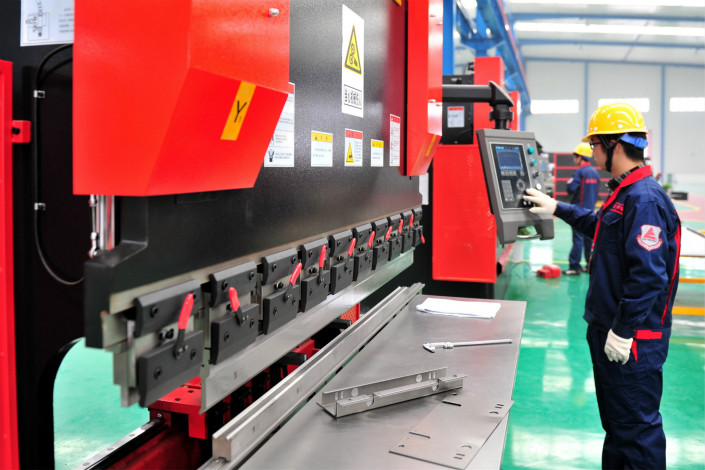 Of the14 machine tool firms listed on either the Shanghai or Shenzhen stock exchanges, eight reported profit growth in the first half of 2017 compared with the same period last year. Above, a worker enters data into an automated machine tool control system in Yichang, Hubei province, in January 2015. Photo: Visual China

After a prolonged downward period beginning in 2011, the sector is showing strong signs of recovery. Among 14 machine tool firms listed on either the Shanghai or Shenzhen stock exchanges, eight reported profit growth in the first half of 2017 compared with the same period last year; 11 saw revenue growth.

State-run Shenyang Machine Tool lost a total of 507 million yuan ($77.3 million) in the first half, despite a 10-billion-yuan rescue from the government in May. Its revenue decreased by 28.6% year-on-year to 2.2 billion yuan, according to its latest financial results.

The machine tool industry supplies equipment to companies engaged in the production of cars, airplanes, boats and electronics. The sector has been on a downward path since 2011 in part due to a slowing Chinese economy, but has shown signs of recovery since the fourth quarter of 2016.

During the slowdown, the industry shifted from producing low-end products to high-end customized one. As state giants like Shenyang Machine Tool struggled with losses and debts, some private firms seized market opportunities by expanding into high-end markets, including industrial robotics, consumer electronics and the aerospace industry.

For example, ZheJiang RIFA Precision Machinery Co. Ltd. expanded into these fields as early as 2014, and in the first half of 2017, the private firm saw its net profit increase 46% year-on-year to 39 million yuan as it benefited from manufacturing aircraft equipment and aerospace components, according to a stock exchange filing.