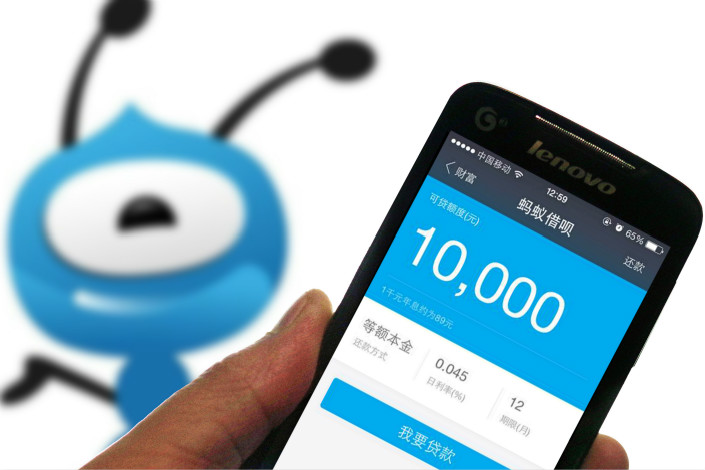 Huabei and Jiebei, the online small-loan services of Ant Financial Services Group, are the largest issuers of structured notes backed by micro consumer loans. Above, a smartphone screen shows the app for Jiebei. Photo: IC

More companies in China have in recent years packaged their receivables and loans in what the regulators here called “corporate” asset-backed securities (ABSs). As of the end of June, corporate ABSs for the first time took over so-called “credit” ABSs, backed mainly by bank loans, as the country’s most popular asset-backed structured products.

Through securitizing unpaid bills and outstanding debts, companies can fill their funding gap by monetizing income-generating assets without disposing of them. ABSs have also become a much-needed alternative funding avenue as customer payments are delayed amid slower economic growth, and as access to bank loans is tightened amid the nationwide deleveraging campaign.

However, like most other structured products, credit risks of the underlying assets aren’t always clear. The existing framework on regulating ABSs in China also needs to keep up with the growth of the sector to better protect investors and prevent systemic risks from building up while remaining conducive to innovations, say regulatory sources and market watchers.

China formally launched its ABS market in 2005, with most structured notes back by bank loans. Companies became active issuers since 2014 when regulators relaxed rules that made them easier to issue ABSs.

In about three years, corporate ABSs have ballooned to a $155-billion market in China. According to data from financial information provider Wind, as of the end of June, nearly 60% of ABSs were backed by corporations, overtaking bank-loan-backed credit ABSs as the dominant form of structured notes in the market.

Several underwriters told Caixin that corporate ABSs are their key business focus for this year, as equity and debt financing lose their luster partly due to higher market interest rates. And as fixed-income analyst Pan Jie at Orient Securities Co. said, companies prefer issuing ABSs as they don’t dilute shareholders’ equity and aren’t subjected to a funding limit that applies to ordinary bond issuance.

In China, there are 779 corporate ABSs listed on stock exchanges. The biggest group is structured notes backed by micro consumer loans. Huabei and Jiebei, the online small-loan services of Ant Financial Services Group, are the largest issuers, which take a combined 85% share of the market, with assets worth 95.8 billion yuan ($14.7 billion).

A person close to the China Securities Regulatory Commission (CSRC), the primary regulator of corporate ABSs, said it is closely watching the booming market and its potential risks.

So far, the regulator is not overly concerned, as companies are sitting on a wealth of big data that helps with early detection of risks, the person said. The overall credit quality of underlying assets remains intact, the person added.

Having said that, a high-profile punishment handed down by the CSRC in July indicated that the regulator has turned cautious.

In late July, CSRC barred Hengtai Securities Co. from issuing new funds that invest in ABSs for six months after the regulator-backed industry association ruled the brokerage had improperly moved money in and out of the three ABS funds it manages. Hengtai was found moving a total 1.44 billion yuan out from the ABS funds without notifying investors.

The broker apparently sees it in another way, as Hengtai defended that the money transfer was a common practice to lower refinancing costs.

“The key purpose for brokers to provide ABS products is to help companies broaden its financing source and lower financing costs,” Hengtai wrote in its defense sent to the Asset Management Association of China (AMAC).

Various brokers and ABS managers later told Caixin that such practice of fund-pooling does exist. But still, Hengtai was ruled violating the Securities Law, the AMAC said.

“The regulator most cares about how funds are raised and whether the underlying assets are as they claim to be,” the person close to the PBOC said. The person added that these two factors will remain the key criteria in policing corporate ABSs in the future.

Another indication of regulatory caution is slower approval of new products.

Several ABS brokers said that on average, the CSRC’s approval process is now at least 30 days or more, compared with around 10 days before. And that has contributed to the 7.4% drop of approvals in the second quarter from a year ago, as well as the 10% drop in the first quarter.

Chen Chunyan, deputy secretary at AMAC, said the corporate ABS market needs to improve its system that monitors fund flows in and out of ABSs on an ongoing basis. The rationale is that, by close examination, credit risks could be detected before the product actually defaults.

The market is also concerned that investors’ stakes in ABSs will be well-protected if the issuing company goes bankrupt, and vice versa.

In late July, Li Chao, the vice chairman of CSRC, had warned of weak due diligence and risk control of ABS products.

The regulator should also deal with the concerns that stems from the question of whether the underlying assets for ABSs are already split from the company and placed in a so-called special vehicle company. This move helps isolate risks between the ABSs and the companies themselves.

A senior partner at a major law firm told Caixin that all ABS-market should attach more importance on risk management rather than the issuance itself. Otherwise, any outstanding ABS product could be a time bomb for investors, as they are not protected from potential delinquencies.