‘Shoe King’ Belle Down on Its Heels 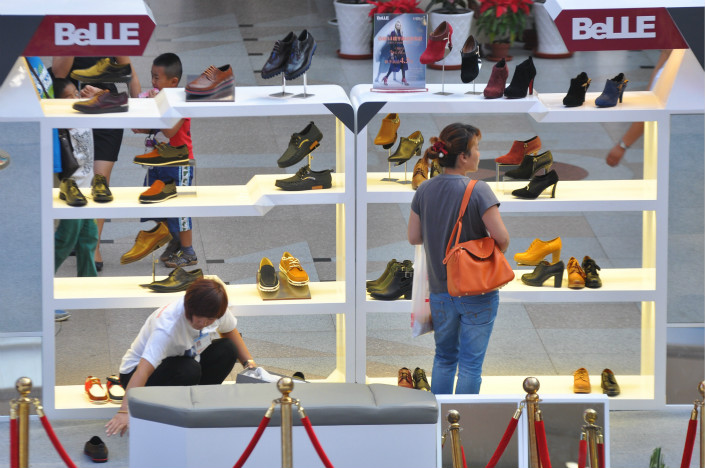 Belle International Holdings Ltd. is the world's largest maker of women's shoes, but its business has been hurt by a perception that its fashions aren't up-to-date and by online competition. Above, Belle autumn shoes are displayed in Shenyang, Liaoning province, in September 2014. Photo: Visual China

At the height of its power six years ago, Belle boasted a retail network of more than 20,000 stores across China. It was selling more than 40 billion yuan ($6 billion) worth of shoes every year. And it was the biggest mainland retailer on the Hong Kong Stock Exchange in 2011, only four years after listing, with a market capitalization of about HK$150 billion ($19.2 billion).

Belle today still ranks as a major retailer and the world’s largest maker of women’s shoes, with 14 brands in its footwear closet. And it is licensed to distribute famous sportswear brands such as Nike and Adidas in China, the home of a rising consumer class.

Nevertheless, the company’s retail unit is struggling to keep pace with competitors in a rapidly changing business landscape.

Belle’s shoe styles have been criticized as out of step with consumer demands. And its retail operations have been affected by China’s shift to online shopping, a sector that has seen sales volumes jump more than 30% annually over the past decade, according to consultancy firm Deloitte.

Belle cited flagging sales for the decision to shutter 366 mainland and Hong Kong stores in 2015 and 700 more last year. According to the company’s financial report for its 2015-16 fiscal year, net profits fell for the first time since its public listing, declining 38.4% year-on-year.

On April 28, Belle announced its withdrawal from the Hong Kong bourse as part of a privatization plan that valued the company at HK$53.1 billion. The changeover and delisting process, which was one of Hong Kong’s largest ever, ended July 28.

The private equity firms backing the privatization still consider Belle a good investment. But time will tell whether the company can restore what used to be a royal reputation.

Belle, founded by Hong Kong businessman Tang Yiu in 1982, initially sold most of its mainland-factory-sourced shoes in Hong Kong. In the early 1990s, the company built design studios and a factory in Shenzhen. It then launched a mainland retail expansion campaign.

After going public in 2007, Belle aggressively expanded into Chinese department stores. Those stores soon accounted for 80% of the company’s retail shoe sales.

In 2012, however, department stores started getting squeezed out of business by retailers in new malls. Profits in 2012 declined a combined 6% from the previous year for 81 benchmark Chinese department store companies, according to the China Commerce Association for General Merchandise.

Belle’s profits began to show the same pattern of slowing growth displayed by major department stores like Parkson Holdings Berhad. The Malaysian department store operator, one of the first major foreign entrants to China's retail industry, now has 46 stores in the country, down from 60 in 2015.

Belle CEO Sheng Baijiao has acknowledged the changing climate. “We are very dependent on department stores, which are in decline,” he said in May.

Meanwhile, online retailers have been grabbing a larger share of the shoe market. Belle tried unsuccessfully to build online shoe sales platforms in 2009 and 2011.

Last year, Belle reported its footwear sales volume fell 10% from the previous year. Although licensed sports and apparel business sales were up 15.4% for the period, profits fell about 18% to 2.4 billion yuan in part due to low profit margins on licensed-product sales.

Sales growth rates for the company have declined every quarter since early 2014.

Meanwhile, Belle’s image has apparently suffered in the face of what some say are customer complaints about its shoe styles. Some claim the footwear fails to keep up with fashion trends.

Fashion updates may have become slow to reach Belle stores. According to the company, Belle retail outlet shoe inventories turn over on average every 215 days, an increase of a 25-day turnover in 2013.

It apparently took Belle executives some time to realize that the company’s troubles were more than temporary.

The company’s 2012 financial report called business the previous year “difficult,” noting sales and profit growth had slipped to historic lows. But executives apparently linked the poor performance to a wider industry downturn they expected to eventually reverse. As a result, Belle continued adding stores to its network.

Two years later, Belle executives changed course and launched a business overhaul. At that time, Sheng, the CEO, said the company should spend two to three years improving its communications and logistics systems.

Belle later closed stores against the backdrop of “miserable” financial results, Sheng said. That’s when the company decided to privatize and delist its stock.

“It felt like we had no other way to explain ourselves” to the market, Sheng said.

Nearly all of Belle’s shareholders supported the privatization deal, through which Hillhouse Capital Group and CDH Investments took control of the company on July 27. It was the biggest deal of its kind ever in Hong Kong.

Hillhouse now holds a 57.6% stake, and CDH has 11.9%. The rest is controlled by management. Belle founder Tang said he plans to leave the company.

Belle does not plan to list on the mainland’s A-share market, as some Chinese companies have done after leaving a foreign bourse, a person close to the privatization deal told Caixin. Rather, the takeover was aimed at injecting capital and fresh resources into the company.

“This decision was made to give the company an opportunity, and also to also give myself an opportunity,” said Sheng, who plans to work for Belle for several more years.

Sheng said that before departing, he hopes to support a business transformation that focuses on “digitation and making use of the mobile internet.”

Big changes are in the works. Hillhouse plans to add 3-D printing to Belle’s shoe manufacturing and let customers try shoes at stores before ordering a personalized pair online. To make this happen, Belle is now installing about 1,000 3-D foot scanners in its stores.

A person close to the privatization told Caixin that even though Belle is currently facing huge setbacks, Hillhouse thinks it still has a solid foundation thanks to decades of business experience and prominence as a huge maker of women’s shoes.

Sources also said Hillhouse and CDH consider the Belle deal an opportunity to transform a traditional retailer into one that integrates online and offline platforms, and uses technology to increase product quality and services.

Sheng had admitted in 2016 that big changes will be necessary to save Belle.

“Unless the company turns around,” he said, “it will die a slow death.”