By Lu Bingyang and Song Shiqing 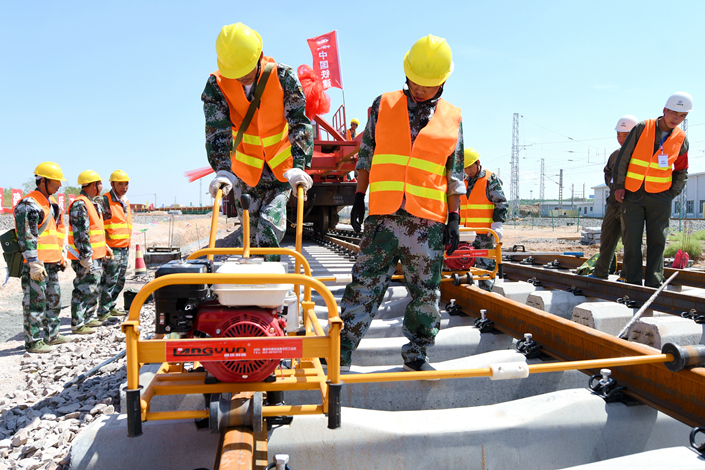 China’s top two rail builders, which together handle more than 90% of railway infrastructure projects in China, were fined for illegally subcontracting projects and using substandard materials.

It was the second time this year that the National Railway Administration fined the two state-owned giants. In July, China Railway Construction Corp. Ltd. (CRCC) and China Railway Group Ltd. (CRG) were fined 1 million yuan ($153,200) and 19,800 yuan respectively for changing a project design without authorization.

After an investigation that started with a whistleblower’s report, the regulator found a branch of CRCC and a branch of CRG had subcontracted projects illegally while building railways in the southern Chinese province of Guangzhou in June.

One of the subcontractors, Zhuhai Chengfa Construction and Engineering Co. Ltd., was also fined 133,400 yuan for undertaking projects without the proper qualifications.

The regulator also found that another branch of CRCC had used substandard materials when constructing a tunnel in China’s northwestern city of Lanzhou, Gansu province. The regulator fined the company 13,700 yuan. It also slapped a 685 yuan fine on each of the three employees who were directly responsible.

Each of the fines was the minimum amount allowed under Chinese law. The minimum fine for illegal subcontracting is 0.5% of the project’s contract value, according to the law. For substandard materials, the minimum fine is 2% of the contract’s value.

Safety and quality problems in railway construction grew over the course of last year. During the first three quarters of 2016, the railway regulator unveiled 411, 1,183 and 1,230 such cases in the first, second and third quarters respectively, according to a document issued by the regulator.

CRCC and CRG are both engaged in engineering contracting for railways and highways. Before 2000, the two state-owned giants both were under the now-defunct Ministry of Railways. They have been supervised by the State-Owned Assets Supervision and Administration Commission since 2003.