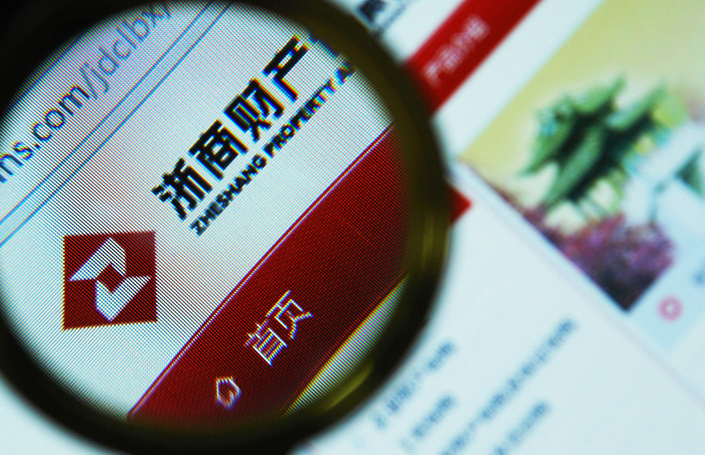 Hangzhou-based Zheshang Property and Casualty Insurance Co. has been ordered by the country's insurance regulator to increase its capital to improve its “solvency” — the ability to pay claims — before it can sell more non-auto insurance policies or open more branches. Photo: Visual China

Zheshang Property and Casualty Insurance Co. is barred from selling new non-auto insurance policies and opening new branches, until its capital is replenished enough to meet the minimum regulatory requirement.

According to a document issued by China Insurance Regulatory Commission (CIRC) dated Tuesday and seen by Caixin, the Hangzhou-based midsize insurer must increase its capital to improve its “solvency” — the ability to pay claims. In China, core solvency adequacy ratio for insurers must be at least 50%, but Zheshang Property’s stood at 45.4% as of the end of June.

The insurer’s capital plunge was a result of a massive claim payout of 1.15 billion yuan ($177 million) after a bond it had insured defaulted late last year. In the quarter that ended June 30, its comprehensive risk level fell to the lowest “D” grade, and the regulator said there were “relatively high risks over insurer’s business operation, reputation or liquidity.”

Zheshang Property has recently raised 1.5 billion yuan from selling new shares to existing shareholders without diluting their stakes, Caixin learned. It is unclear whether that alone will be sufficient to bring the insurer back to normal operations.

“After adding the 1.5 billion yuan to the company’s registered capital, its core solvency adequacy ratio will see a significant surge,” Zheshang said in its second-quarter solvency report.

The fund-raising plan hasn’t been approved by the regulator.