Drugstores Set to Profit With Break From Hospital System’s Grip 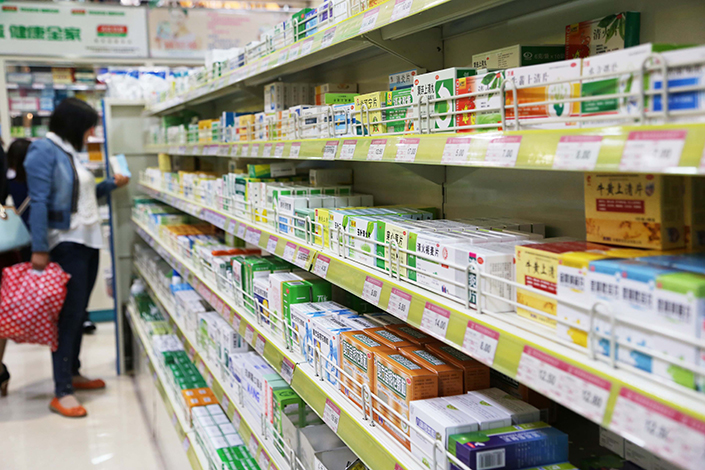 China is making it easier for consumer to buy drugs from third-party sellers, such as the supermarket (above) in Xuchang, Henan province. These changes to regulations governing hospital-run pharmacies are expected to fuel annual sales of 620 billion yuan ($94 billion) at third-party sellers by 2020. Photo: IC

China’s in-hospital pharmacies have long held a tight grip on where and how much patients pay for their drugs. But an expiration date is approaching.

China is now more tightly regulating hospital-run pharmacies, and allowing patients better access to third-party drug sellers — changes that are expected to fuel annual sales of 620 billion yuan ($94 billion) in the sector by 2020, according to consultancy Roland Berger.

Traditionally, patients have bought medicines at hospitals after receiving a prescription from a doctor — prescriptions that they were not allowed to use at outside pharmacies. Hospitals often added surcharges of up to 15% to these purchases, which created an incentive for doctors to prescribe certain medicines and thus boost revenue at the expense of patients.

Beginning earlier this month, public hospitals were prohibited from adding drug surcharges, according to joint guidelines published in May by seven government authorities, including the National Health and Family Planning Commission (NHFPC) and the National Development and Reform Commission.

And last year, China’s State Council — the country’s cabinet — urged hospitals to lift their bans on allowing patients to take prescriptions to third-party pharmacies, a reform process that is still in progress.

Against this backdrop, sales at independent pharmacies in China are expected to rise 10% to 15% each year through 2020, Roland Berger says.

But challenges are likely to remain, leaving room for drug retailers to improve.

For one, creating a system through which hospitals can share prescriptions with outside pharmacies will take time. Furthermore, e-prescribing remains in its infancy in China — compared with the United States, where 93% of pharmacies have access to digital prescriptions.

Standalone pharmacies also carry a limited selection of drugs. Hospital pharmacies have around 3,000 types of prescription medicines, while third-party sellers carry about 2,000 types, on average, the consultancy said.

Drugstores can expand their catalogs by introducing direct-to-patient (DTP) models and developing their own brands. Drugmakers usually distribute new and expensive drugs through DTP pharmacies, as public hospitals only bring in such medicines if suppliers agree to cut prices.

Only a handful of Chinese drugstores develop their own brands. By comparison, at U.S. pharmacy chain CVS, self-branded drugs recently reached 22% of sales, Roland Berger said.

The consultancy also suggested that drug retailers run in-house diagnostic and prescribing services, thus expanding their scope within the industry.

Pharmacies can also increase market share by launching online stores. The report said that online drug sales have surged 134% annually over the past six years, and are expected to grow around 50% annually through 2020 to 75 billion yuan.