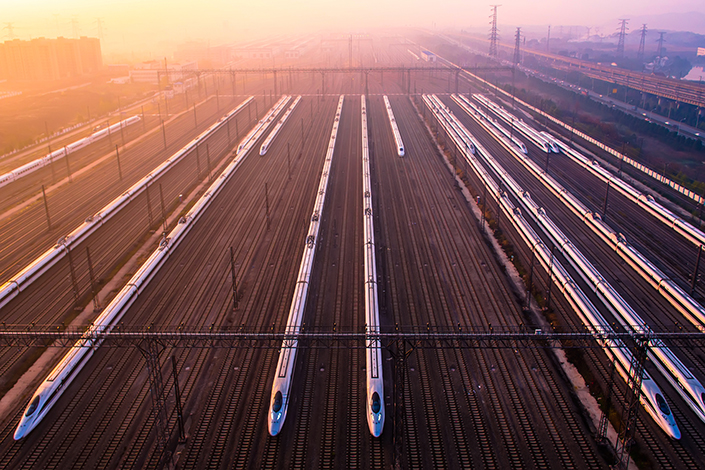 Construction on a China-backed, 480-mile high-speed rail link between the Russian cities of Moscow and Kazan may begin in the first half of 2018. Above, high-speed trains sit in a maintenance base in Wuhan, Hubei province, in December 2014. Photo: Visual China

A China-backed plan to build a high-speed railroad between the Russian cities of Moscow and Kazan is set to get Moscow’s approval by the end of this year, a source close to one of the plan’s main participants told Caixin.

The Russian government is satisfied with the design created by China Railway Group Ltd., the state-controlled firm specializing in railroad survey and design, the source said. Construction could begin by the first half of 2018, he added.

The 770-km (480-mile) high-speed line between Moscow and Kazan may eventually become part of a much-bigger railway linking the Russian capital with Beijing. The project would come under China’s “Belt and Road” initiative, aimed at strengthening China’s relations with countries in Asia, Africa and Europe, primarily through infrastructure investment and construction.

The project marks the latest move by China to export its state-of-the-art rail technology. In addition to the design, construction of the bullet trains will be handled by Chinese companies, the source said.

CRRC Corp. Ltd., China’s main train-maker, said in 2015 it will build bullet trains for the project with a Russian counterpart. In June 2016, CRRC and Russia’s Sinara agreed to set up a joint venture to manufacture at least 100 bullet trains.

But it is still not clear who will be responsible for construction of the actual rail. Another China-based source with knowledge of the deal said that China and Russia have not reached agreement yet in that respect. But Moscow prefers to do it alone to lower the cost and get more experience with the technology, he said.

The Chinese government would finance the project with a 20-year loan of $5.9 billion, Russia’s Tass news agency reported last year. The report also quoted a vice president from Russian Railways saying that China did not request sovereign state guarantees from Russia for the loan.

But China denied the report, saying financial details for the project were being negotiated.

The Moscow-Kazan railway is one of a handful of high-speed rail projects now being built by Chinese companies overseas. But the push to export the technology has also received some setbacks after initial successful bids to build lines in the U.S. and Mexico later collapsed.