What Fallen Officials Did To Get Ahead and Avoid Getting Caught 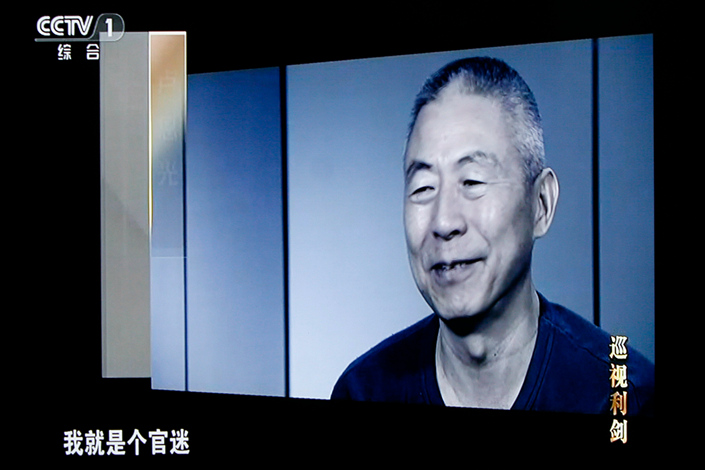 The recently concluded four-episode documentary "The Sharp Sword of Inspection Tours" looked into the lives of several corrupt officials and how they used their clout to enrich themselves and their relatives. Above, a CCTV screen grab shows Lu Enguang, former director of the political department of the Ministry of Justice, telling how he bribed his way to the top. Photo: Visual China

(Beijing) — Several former high-level officials recently got some face time on state television, just not in the way they had ever hoped for.

A four-episode televised documentary, which features a group of former provincial-level officials and heads of state-owned enterprises currently sitting behind bars or under investigation, revealed details about how they grew corrupt and used their clout to enrich themselves and their relatives.

The documentary explored the classic paths that officials take to their downfall. These officials’ misdeeds were exposed in several rounds of inspections mandated by the omnipresent party disciplinary watchdog, the Central Commission for Discipline Inspection, or CCDI, over the past five years in the wake of a nationwide campaign against corruption.

China embarked on the far-reaching campaign against entrenched corruption soon after Xi Jinping was elected party chief in November 2012. The campaign aimed to bring down both “tigers and flies,” metaphors that Xi coined in 2013 to refer to highflying corrupt officials and their low-level counterparts. The CCDI is the government agency executing the campaign.

The documentary’s second episode showed how a former glass-factory owner named Lu Enguang in eastern China’s Shandong province bribed his way to a position as director of the political department of the Ministry of Justice.

“I was so obsessed with being an official. Looking back at the paths I walked over the last 20 years, it feels like a dream, a nightmare. I was crazy,” Lu said in the documentary.

To smooth his path to advancement, Lu forged a series of documents about his age, family status, education and work experience. Discrepancies were even found in his application to join the Communist Party of China.

To get an edge over his rivals for promotion, Lu altered his birth certificate so he appeared to be seven years younger than he actually was. Even though he has seven children, he officially registered only two of them. He managed to “register” the other five as relatives. Lu went as far as to forbid them from calling him “Dad” at home.

From 1997 to 2003, Lu used money to boost his career prospects. Over that period, he was promoted from a village official in charge of agricultural development to an official in the Ministry of Justice at the vice ministerial level, according to the documentary, “The Sharp Sword of Inspection Tours.”

When it came to offering bribes to other officials, Lu moved fast and didn’t take no for an answer, said Zhang Jingtao, a former party secretary of Liaocheng, a city east of Shandong’s capital of Jinan, which administers Lu’s hometown.

Lu said he felt that no other job held a candle to being an official. He cited his experience of local officials always being invited to take the best seats at the dinner table during gatherings with local business leaders.

The party began investigating Lu in December on suspicion of a severe breach of party rules — a euphemism for making or taking bribes. Lu was expelled from the party and fired from his post in May.

Authorities are also investigating cadres who played a role in Lu’s irregular promotions for negligence in their duties. Some of those under investigation have posts at the provincial level.

The final episode of the documentary, which aired Monday, detailed how Wang Baoan, former head of the National Bureau of Statistics, used his political influence to help his two younger brothers secure higher official positions in local governments in Henan province. He also helped his youngest brother, a businessman, make deals and obtain funds illegally.

For example, Wang’s youngest brother was able to secure credit lines worth of billions of yuan from 28 Henan rural banks after Wang hinted to the then-head of the Henan Rural Credit Union that his brother needed funds for a project. Several years later, the younger Wang still had failed to pay any interest on the loans.

Wang also helped many other businessmen get approval for their projects. In exchange, he received gifts such as expensive cars and luxury apartments, the documentary said. Wang was cautious to never register these assets under his own name.

Wang was expelled from the party in August 2016. The party’s top disciplinary watchdog accused him of “having no political beliefs whatsoever.” It also charged him with fighting the party’s investigation.”

Wang was indicted in late April and sentenced to life imprisonment on May 31. Prosecutors said he took bribes — both directly and indirectly — totaling 154 million yuan ($23.5 million) during his 22-year career as an official. During that career, he served in many important positions such as vice finance minister and director of the National Bureau of Statistics.

Some officials tried in vain to cover up their misdeeds, the documentary said. Yu Haiyan, former vice governor of northwestern China’s Gansu province, accused of cronyism, tried to destroy evidence of his wrongdoings after he perceived dangers from an investigation near the end of 2016, another episode showed.

His wife told the special agents that he had used a dozen special cellphones to contact the businessmen he dealt with. To cover his tracks, he soaked the phones in vinegar to erode the circuitry before dumping them in the Yellow River.

Yu often lingered on the bank of the river during that time. Besides phones, he also dropped the luxury watches he received as “gifts” into the river’s muddy waters.

Over the past five years, the CCDI carried out 12 rounds of inspection tours of party organizations in 227 local government organizations, department agencies and state-owned enterprises. The goal was to show the party’s central committee’s “zero tolerance” policy toward corruption, according to the CCDI, which co-produced the documentary with state broadcaster China Central Television (CCTV).

In the documentary, inspector Sang Zhumei called the inspections a “people’s war.” Sang, an inspection veteran, oversaw an investigation in eastern Anhui province from February to April 2016, which led to the opening of a formal investigation into the province’s vice governor in May 2016.

The inspection teams have received “valuable” leads and evidence about targeted officials from outraged locals in the know. The official People’s Daily referred to their contributions as “democratic supervision” with Chinese socialist characteristics.

The anti-corruption documentary arrived in the run-up to the 19th National Party Congress of the Communist Party, the ruling party’s most important political event, which is expected to add new members to the party’s leadership as some older officials retire.

Experts said the timing of the documentary’s airing was well-chosen to highlight the achievements of China’s leadership.

“The anti-corruption drive is the biggest feat of Xi’s core leadership. It has had a deterrent effect on corruption to a certain extent, but the most important thing is that the people love it,” said Zhang Ming, former political science professor at Renmin University.

Zhang said he expects the authorities to improve the system to not only bust corrupt officials after the fact, but to stop corruption before it starts.

The party’s Central Committee vowed in 2014 to improve the intraparty supervision system so that officials “dare not rot and cannot rot.”

The CCDI said the inspection system is an effective form of self-supervision for the party. “It proves that the Communist Party is determined, confident and capable of resolving its own problems and purifying itself,” the CCDI said in an article published on its website on Sept 11.