Authorities Reverse Decision to Punish Teachers for Not Cooperating in Contest 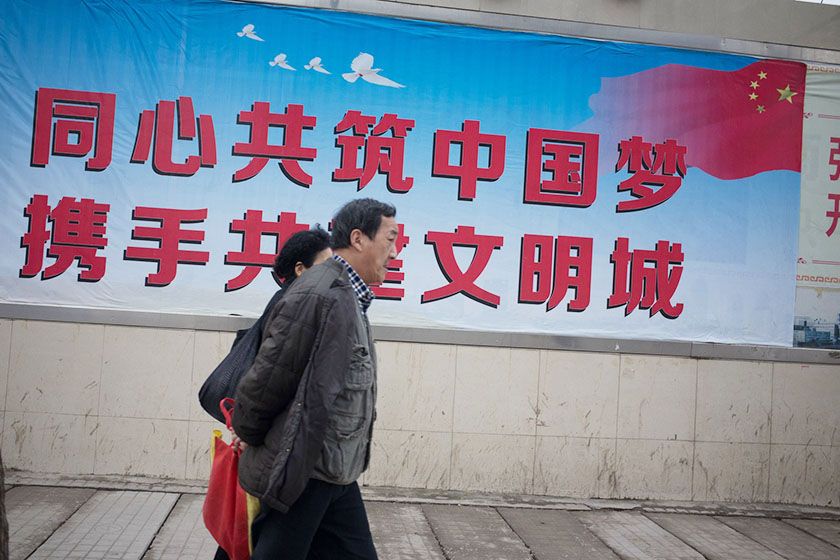 The Suxian District Education Bureau, in the city of Chenzhou, Hunan province, has acknowledged that planning to dock part of the pay of two teachers who didn't cooperate with the "National Civilized City" contest was too harsh a punishment. Above, a poster touting the contest is seen in Wuhan, Hubei province. Photo: Visual China

(Beijing) — A school authority in China’s Hunan province has reversed a decision to dock the pay of two teachers for refusing to be quizzed over their knowledge of their city’s quest to be a “National Civilized City.”

Acknowledging that the punishment was too harsh, the Suxian District Education Bureau, in the city of Chenzhou, said Tuesday it will not withhold some of the two teachers’ respective three-month performance-based salaries.

The about-face came after a chorus of criticism was unleashed online following authorities’ earlier related decision to deem the two unqualified to be nominated as standout teachers for the school year.

The National Civilized City program, launched in 2003 by a national office affiliated with the Communist Party’s Central Committee, is a nationwide contest that cities can choose to participate in. The contest assesses 188 criteria in 12 categories, including core socialism values, social development, business climate, clean governance and development of a sound justice system.

But the criteria also require that at least 90% of residents in a candidate city be aware of their city’s aspirations for such prestige. This awareness level is often gauged via rounds of inspections from city authorities who quiz local citizens and government employees.

A document leaked online last week said that one teacher from Suxian Middle School refused to respond to questions from government inspectors on her awareness of Chenzhou’s drive for National Civilized City status. A second female teacher tried to pass herself off as a parent of one of her students in a bid to dodge similar questions from inspectors, according to the leaked document.

Many comments online were critical of the program.

“For residents to be able to memorize answers linked to awareness of the National Civilized City award does not equate to such quality,” one Caixin reader wrote.

“Such requirement itself is an insult to the concept of civilization.”

Another Caixin reader called for abandoning the award, arguing that it has become a burden on ordinary people and a waste of public money.

While confirming the authenticity of the online document, one Suxian district education official told Caixin on Tuesday that the teachers were punished in accordance with a 2013 document on disciplinary violations and lack of morality among citizens.

“If all 3,000 teachers in Suxian district did the same, how could Chenzhou accomplish its goal during an inspection by the provincial government?” he said.

City inspectors don’t target just public servants and schoolteachers. Some ordinary residents are randomly quizzed on their awareness of the campaign, according to a local resident who asked not to be named.

“If you fail the test, they will ask about your employers” in order to hold you accountable, he said.

To meet the national government’s 90% awareness level, Chenzhou authorities decided to require 100% awareness among its government employees, teachers and students.

But the city failed to make the 2017 shortlist for the award because a “major problem” was uncovered by inspectors, according to a notice issued by the central government office overseeing the program. The office did not say what the problem was.