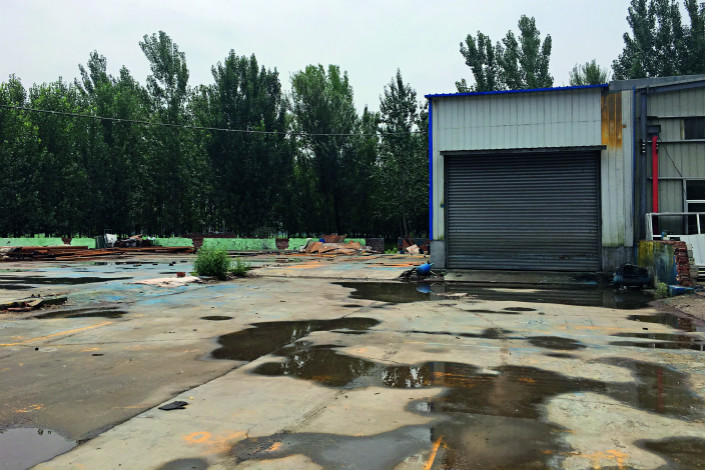 Authorities cut off water and power to this plant in Jiyang county, Shandong province, that supplies components to hydraulic lift table manufacturers there. Government inspectors had listed the plant as a polluter — a designation some businesses say that authorities are handing down for reasons not linked to pollution. Shen Fan/Caixin

(Jiyang county, Shandong province) — At first, he was dumbstruck. Then panic set in before the urge to resist took over Liu, a businessman from Shandong, when environmental inspectors told him to shut down his small backyard factory in May.

Liu’s factory, which produces machine components, is among tens of thousands of businesses that were ordered to close shop by the end of September or shell out thousands of yuan to upgrade their pollution-control facilities as part of a nationwide government crackdown on polluters.

Environmental inspectors said the plant didn’t have proper emission-control equipment to handle volatile organic compounds, or VOCs, which can cause headaches, skin allergies or irritate the nose and throat. He was also found to be using land without the necessary permits.

“But how can a business that had been legal for two years suddenly become unlawful?” asked Liu, from Jiyang county in eastern Shandong province, who provided only his surname.

“What am I going to do with the dozen workers I employ, and how do I pay back the tens of thousands of yuan I’ve borrowed from banks?” he said during an interview with Caixin.

Liu, in his early 30s, said he had “no plans to call it quits” although his small factory has been sealed at least twice since May. He said he will wait and see if he can reopen after central government environmental inspectors leave the area or if he can relocate the factory elsewhere.

Authorities’ attempts to bring on board business owners like Liu to support their fight against air pollution is being undermined by the heavy-handed approach that inspectors are adopting in some areas. Inspectors are “going overboard,” ordering business closures for reasons not linked to pollution such as an expired business license, several small-business owners told Caixin. They are “gunning for favorable performance reviews at the expense of workers’ livelihoods” and don’t take into account the effect the sudden closures had on local economies, they said.

Local governments in China have traditionally turned a blind eye to environmental violations as long as manufacturers contributed to economic growth, a practice that led to lax enforcement of environmental standards in the past. This is why manufacturers like Liu were able to get a business license without a proper environmental impact clearance.

But the sweeping inspections launched four years ago as part of a central government initiative to clean up foul air, choking northern China in particular, are changing such practices.

Challenges from worsening air quality in the country’s north were highlighted in a report released by the Ministry of Environmental Protection (MEP) on Sept. 19, which showed pollution in the Jing-Jin-Ji area worsened in the first eight months of the year compared to the same period in 2016.

The average concentration of fine cancer-causing particulate matter, known as PM2.5, rose 10% to 65 micrograms per cubic meter of air in the region, or twice the level considered safe by the World Health Organization. The ministry also recorded a similar increase in the level of PM10 particulate matter, another major air pollutant that causes lung and heart diseases.

Authorities are scrambling to cut the level of PM2.5 choking the Jing-Jin-Ji area — home to nearly 10% of China’s population. The target set for the end of 2017 is to reduce pollution to three-fourths of the level in 2012.

Nationwide, dangerous particulate matter should be slashed by 8% by year-end from 2012 levels.

But small-business owners complained that the inspectors’ tough approach was “simply overkill” because those earmarked for immediate closure would have water and power cut off and their equipment and production materials confiscated. Those ordered to upgrade facilities said authorities didn’t give them enough time or help to install costly equipment.

There are also concerns that mass layoffs could lead to social unrest and decimate economies in small towns. More than 400 manufacturers from Jiyang county in Jinan, Shandong’s provincial capital, have been told to close or suspend production as of May, crippling the area’s hydraulic lift table industry, according to the local environmental authority. Making machines used for loading packages onto trucks was one of the main growth engines for this impoverished county.

But Jinan is also among the 10 cities in China with the worst air last year, according to an MEP ranking.

So despite the controversy surrounding the action plan, “the campaign is necessary because excessive emissions by reckless business operators have become a major factor choking the air in some areas,” said Tian Weiyong, head of the MEP’s Department of Environmental Supervision and Inspection.

Panic before the deadline

“Businesses are starting to feel the pinch as they are required to be more socially responsible for pollution,” said Ma Yong, from the China Biodiversity Conservation and Green Development Foundation, an environmental advocacy group in Beijing.

But several local government officials told Caixin that in some instances, central government inspectors may have gone overboard with enforcement “just to get positive personal evaluations.”

But in Zhengzhou, the capital of Central China’s Henan province, environmental inspectors who were pressured to catch more violators and feared that they would be held to account over “negligence” have gone after businesses over licensing irregularities and violations of land-use rules, a local environmental official said.

“That’s why we have seen some businesses making steamed buns and corner shops repairing tires being listed for closure or suspension,” said the official, who asked not to be named.

Inspectors listed 539 businesses in Zhengzhou for closure or suspension due to environmental violations at the end of March, according to the MEP. That number jumped twentyfold to more than 10,000 at the end of June, according to Henan Daily, a newspaper affiliated with the provincial government.

The Environmental Protection Ministry in April criticized the Beijing municipal government for listing some supermarkets, department stores and even companies offering logistics services for closure or suspension.

The economic contribution from small manufacturers targeted by regulators was limited, but they were a major cause of air pollution in some areas, according to analysts. But these small businesses were also responsible for creating many local jobs.

Taking note of possible impact of the closures on workers’ livelihood, some local governments have rushed to take remedial action. Some analysts say that more incentives must be given to businesses to grow greener instead of shutting them down en masse.

Too little, too late?

In Hebei province’s Handan — the most polluted city in China — the local government is building several industrial parks to accommodate struggling businesses earmarked for suspension. These parks will have centralized emission-control facilities and waste-disposal systems that will help to keep business costs down.

Similar initiatives are being rolled out in Shandong province’s Ningjin county, a town known for manufacturing wooden furniture. The new industrial parks will be fitted with facilities to fight excessive VOCs emissions from spray-painting, according to Sun Jiusheng, head of the county government’s publicity department.

Many manufacturers are also struggling to raise extra funds needed to upgrade their facilities. Many were told they would be closed down if they were to fail to install expensive pollution-control equipment.

One small-business owner in Yongnian district in Handan said they need more than 300,000 yuan ($45,600) for the upgrades, including an environmental impact clearance from regulators.

“This amount is simply beyond the reach for most small companies in our area,” he said.

Shandong Qiyun, one of the top manufacturers of hydraulic lift tables in Shandong province’s Jiyang county, had been ordered to suspend production for two months and install emission control equipment when a Caixin reporter visited the factory in July.

Like most hydraulic lift table producers in Jiyang, Shandong Qiyun wasn’t required to get an environmental impact clearance when it received a business license from the local government more than three years ago. But now it’s being targeted by central government environmental officials for not having a clearance and more-sophisticated facilities to minimize VOCs emissions.

That would cost up to 400,000 yuan — not an amount that would break the bank account of a bigger company like Qiyun — but the required environmental impact study could take months, said a line manager from the company, who wished to remain anonymous.

“We’ve already lost over 10 million yuan by July due to the suspension,” he said.

Shandong Qiyun had employed over a 100 workers at its peak, but has had to lay off most of them to keep costs down. The line manager and a few other workers guard the factory that has been padlocked.

“We might not be able to get back on our feet even after we eventually have the clearance certificate, unless the government comes to rescue us,” the manager added.