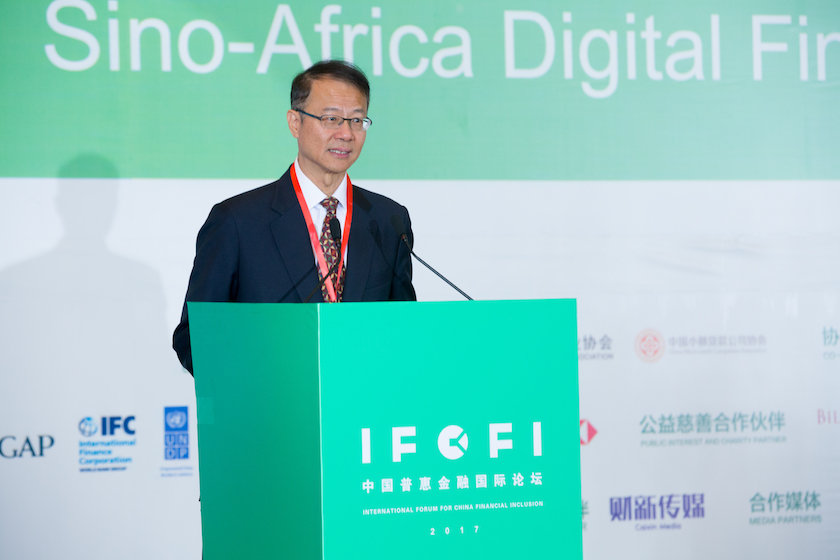 Bei Duoguang, head of the China Academy of Financial Inclusion, told Caixin that the steps the government has taken to improve financial access have helped but are probably not enough to create a self-sufficient microloan market. Photo: Caixin

(Beijing) — To achieve financial inclusion in China, a competitive and sustainable microloan market is more important than simply offering loans at lower rates or to provide lending to borrowers shunned by banks, the head of a local think tank said.

Access to financial services, especially but not limited to loans, is one of China’s policy priorities. The Chinese government launched the campaign in 2015 to alleviate poverty and boost economic progress for the country’s rural population of about 600 million.

For instance, the government has asked commercial banks to increase lending to farmers and small businesses in poorer regions. Some local governments have also provided upfront funding for commercial banks as loan-loss provision as incentives, as some debts have a high chance of turning sour.

Bei Duoguang, head of the China Academy of Financial Inclusion (CAFI), told Caixin in a recent interview that while these measures helped improve financial access, they are unlikely sufficient to create a microloan market that is self-sustainable, scalable and able to operate without government intervention in the long run.

“The true responsibility of the government here is to establish a financial infrastructure that includes an open and competitive market environment, a credit-rating system, a sound legal system and bankruptcy law,” Bei said.

“Without a strong infrastructure, lending to small businesses is much riskier, and the sector will be difficult to develop,” he added.

The CAFI is a think tank funded by China Renmin University, with other founders including the China Banking Association, and sponsors such as Ant Financial Services Group, HSBC Holdings PLC, and Visa Inc.

Bei spoke on the sidelines of a Caixin-sponsored conference on financial inclusion on Thursday.

As part of the national campaign to lend more to low-income groups, Beijing has asked midsize banks to expand loans to the agricultural sector and small businesses. The government also asked large banks to set up an inclusive-finance division by the end of this year, and should tolerate a reasonably higher nonperforming-loan ratio on loans to small and midsize enterprises, according to a government statement following a State Council meeting in May led by Premier Li Keqiang.

“If you force any financial institution that originally target big companies and high-end customers to change its focus to financial inclusion, things could turn out twisted,” Bei said.

The experience of Lankao county could be a case in point.

The impoverished county in central China’s Henan province has asked local banks to set up a revolving credit up to 30,000 yuan ($4,550) for each local resident, Xinhua reported. In return, the government injected 30 million yuan in a loan-loss provision fund to absorb the banks’ potential losses.

But the effectiveness of the injection was much less than the government had expected. Lankao county Deputy Mayor Wang Yantao told Caixin in an earlier interview that only some 20% of the loans were extended to people and businesses within the county.

One of Bei’s suggestions is to expand funding sources to include financial institutions that are willing to take on more risks than commercial banks, such as angel funds, venture capital and private equity investors.

“Inclusive finance should not be interpreted as inclusive banking,” Bei said. “The campaign will become more meaningful only when more capital is involved.”

He also said the government should move away from focusing on the supply of microloans, to understanding the factors that underpin the demand for those loans. A tracker on demand for microloans, for instance, could help inform the government and market participants tackle the problem from its source, he added.

If most of the burden to lend to the rural population falls on the commercial banks, it could end up a moral hazard, Bei said. Some banks that are reluctant to provide financial services to the less-creditworthy population might inflate that exposure to the sector just to get by, he added.

“The government should have a clear mind of how big its role should be,” Bei said.