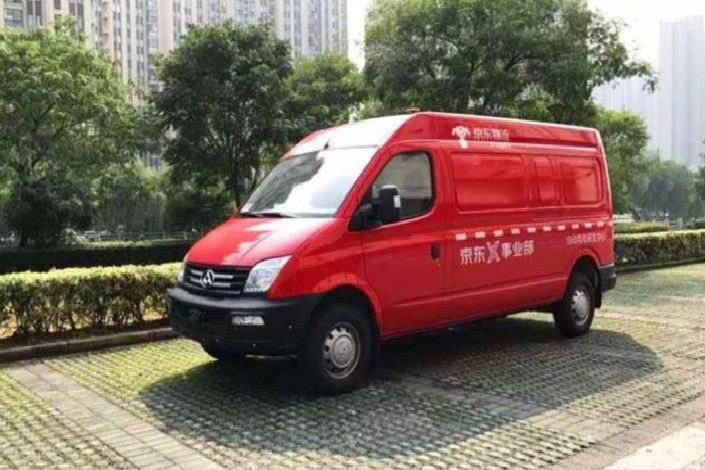 In addition to its unmanned road vehicles (pictured), JD.com has tested delivery drones on Xi'an college campuses and in villages around the CEO's Jiangsu province hometown. Photo: JD.com

Chinese e-commerce company JD.com has unveiled self-driving delivery trucks, developed with two major automakers, showing how it is pulling ahead of rivals also interested in the technology.

JD.com’s two autonomous driving truck models, which it developed with the help of Shanghai-based SAIC Maxus Automotive Co. Ltd. and Dongfeng Motor Corp. in China’s central Hubei province, are both powered by electric motors and are equipped with automated mapping, obstacle avoidance and parking functions.

The trucks will go out for trial runs on roads authorized for such tests, JD.com said, though it did not say when they would actually start making deliveries. During the tests, the vehicles will also be manned by drivers which will take over in an emergency.

Although many major tech players, including e-commerce companies and smartphone-makers, have been researching automated driving, professionals generally agree that the technology is a long way from making it into passenger vehicles due to safety concerns and policy obstacles. That leaves an opening for delivery and logistics companies.

Last year, JD.com set up its “X Department” to research and develop futuristic delivery technologies. It has tested delivery drones on college campuses in Xi’an, Shaanxi province, and in villages in Suqian, Jiangsu province, the hometown of company CEO Richard Liu Qiangdong.

The e-commerce giant, which stands out with its own powerful logistics network, hopes to add automation to both its trucks and warehouses.

JD.com is not the only company looking into autonomous driving technology. More than a year ago, Amazon quietly formed a 12-person team to explore driverless technologies to improve package delivery, the Wall Street Journal first reported in April.

Rival Alibaba seems to have gone in a different direction: passenger cars. It has partnered with SAIC Motor Corp. Ltd. to launch a vehicle that takes advantage of the e-commerce group’s cloud computing system. Alibaba has also promised to unveil its self-driving technologies, though little progress has been reported.