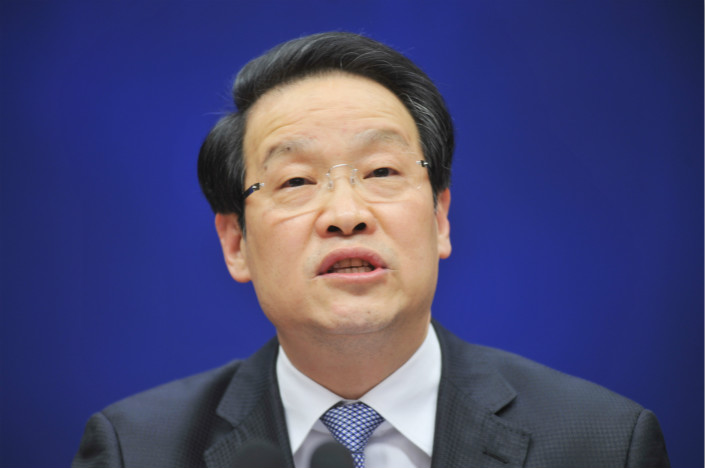 Following the crackdown on universal life insurance products and the fall of the industry regulation chief Xiang Junbo (pictured) on corruption charges, the sector is waiting to see whether liberalizing measures Xiang introduced will be rolled back. Photo: Visual China

The sales of China’s universal life insurance products dropped a hefty 55.1% year-on-year over the first eight months of the year, official data shows, as the country’s regulator continued to crack down on risky operations.

From January to August, life insurance companies took in 417.4 billion yuan ($63.4 billion) from the sale of universal life insurance, a type of short-term policy that combines a high-return investment with a minimal death benefit, according to data released on Monday by the China Insurance Regulatory Commission.

Universal life insurance policies have been a major target of a government crackdown since late last year. Regulators are concerned that such short-term products allow small insurers to raise huge amounts of cash quickly to fund investments in securities and the illiquid real estate market, creating uncertainty for the insurers’ cash flow and liquidity management.

The insurance regulator has issued a series of new rules in recent months to unearth violations and fix problematic businesses connected with the risky products. The regulator’s latest policy document, which was issued in May and is slated to be fully implemented in October, is likely to ban most short-term, investment-focused life insurance products.

As former CIRC head Xiang Junbo, an advocate of a more liberal market, was recently expelled from the ruling party after a corruption investigation, the industry is awaiting whether liberalisation measures rolled out under Xiang’s tenure will be dialled back.

Life insurers’ premium incomes rose by 22.6% year-on-year in the first eight months of this year to 2.08 trillion yuan, according to the data the insurance regulator released on Monday. Property insurers generated 690.1 billion yuan in premium income, up 14.4% from the same period in 2016.