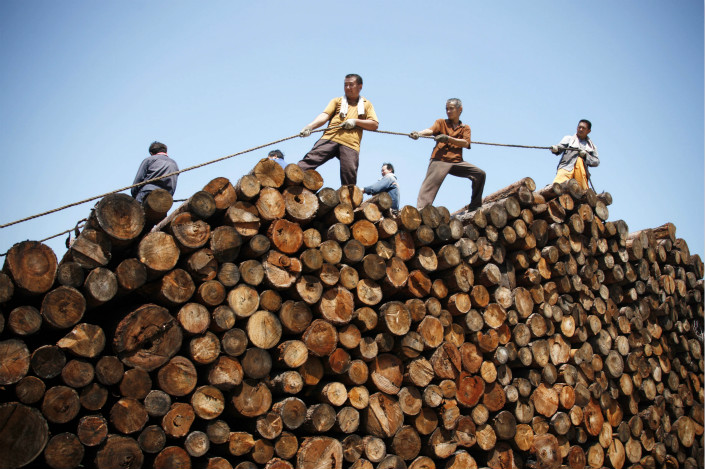 Workers in Anhui province stack lumber, one of the products used by the National Bureau of Statistics to calculate the official producer price index. Photo: IC

The official producer price index (PPI) — which tracks prices charged by manufacturers for finished goods — surged to 6.9% in September, continuing an upward trend that began in August when the index jumped to 6.3% from readings of 5.5% posted in each of the three previous months, the National Bureau of Statistics (NBS) said.

Meanwhile, the consumer price index (CPI) — a gauge for a basket of consumer goods and services — rose 1.6% last month from the September 2016 level but came in below the 1.8% year-on-year reading for August. The August CPI was the second-highest this year but well below the peak 2.5% posted in January.

The latest data suggests the CPI for 2017 will likely fall comfortably below the 3% consumer price inflation target set by the government. And the higher PPI appears to reflect strengthening demand for manufactured products.

The figures have thus cast positive light on the Chinese economy two days ahead of a key Communist Party national congress from which a new lineup of leaders may emerge.

Month-on-month PPI and CPI were each in positive territory in September for the third consecutive month, with the former climbing at the fastest rate so far this year due in part to higher prices for manufactured paper, coal and chemicals, said NBS analyst Sheng Guoqing.

The latest PPI figure came in above a median forecast based on a Reuters poll of analysts. September's CPI, meanwhile, was in line with expectations.

Analysts had expected the statistics bureau to report a 6.3% PPI and a 1.6% CPI for September.

The Chinese economy has apparently shown more resilience than many experts had predicted during the government's "supply-side reform" campaign, which is aimed at cutting excess capacity in certain industries, and parallel initiatives designed to control debt and prevent housing bubbles.

Central bank Governor Zhou Xiaochuan told a bankers group Sunday in Washington D.C. that he expects China's GDP growth rate to reach 7% in the second half of this year, up from 6.9% in the first half. He made the prediction at the G30 International Banking Seminar.

Chinese consumers have significantly expanded their spending on healthcare, for example, with demand pushing prices in the sector up 7.6% in September from a year earlier. Meanwhile, NBS said, combined prices for food, liquor and tobacco edged down 0.4% year-on-year. And prices of pork — a critical component of the typical Chinese diet — fell a dramatic 12.4%.

Some analysts, however, are warning that the latest trend may be short-lived.

"Credit data for September suggests tighter monetary conditions are weighing on lending, which will eventually feed through to weaker activity,” said Julian Evans-Pritchard, China economist at the research firm Capital Economics. “Policy tightening is set to become an increasing headwind to both inflation and growth in the coming quarters.”

Julian added that the decline in consumer price inflation for September was “entirely driven" by weaker prices for food.

But opportunities for any future large uptick in CPI levels over the last quarter "will be limited," said Zhong Zhengsheng, director of macroeconomic analysis at CEBM Group, a subsidiary of Caixin Insight Group.