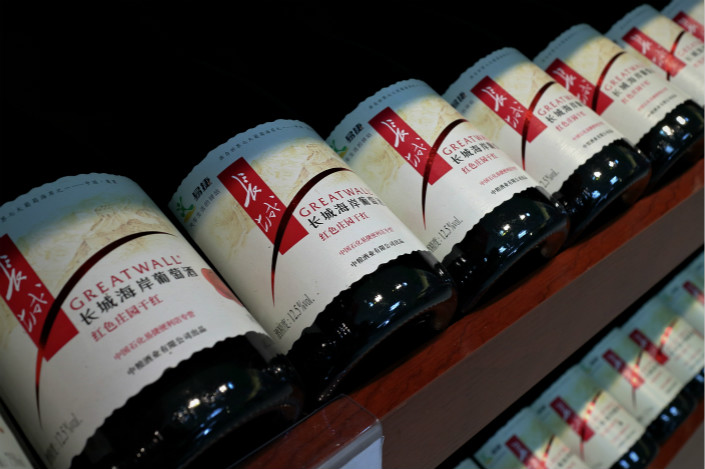 While wine sales grew by more than 20% annually between 2006 and 2012, growth has either slowed or increased marginally year-on-year since then. Photo: Visual China

Continuing to dispose of its non-Coca-Cola assets, China’s second largest winemaker has transferred its money-losing wine business to a unit under parent firm COFCO Corp.

In a HK$5 billion ($649 million) deal, China Foods Ltd. has offloaded its prestigious Great Wall brand, including five production plants in China, five wineries in and outside the country, and the distribution of imported wines, the listed company said in a filing Monday to the Hong Kong Exchange.

After the transfer, China Foods said it will focus on soft drinks. It controls a majority stake in the exclusive rights to manufacture, market and distribute Coca-Cola products in 19 Chinese provinces, representing half of the country’s population.

The soft drink sector is China Foods’ “strongest performing business,” while there are “associated uncertainties in the wine business,” the company said in the filing.

Wine sales in China experienced a golden age between 2006 and 2012 — with growth of more than 20% per year. However, after the country’s economy slowed and an anti-graft campaign began, a cork was put in sales, which dropped from 2013 to 2014 and rose a marginal 6.5% over the following two years, according to market research firm Mintel.

China Foods’ wine segment made a loss of 419 million yuan ($63 million) in the first half of the year, compared to a profit of 111 million a year earlier.

Since the beginning of the year, the company has been disposing of its non-soft drink businesses. It sold edible oil and other kitchen-food assets in May and said it will offload other consumer products — including fruit juice and instant noodles — by the end of the year.

Shares of the Hong Kong-listed company rose 13.6% to HK$5 on Tuesday.