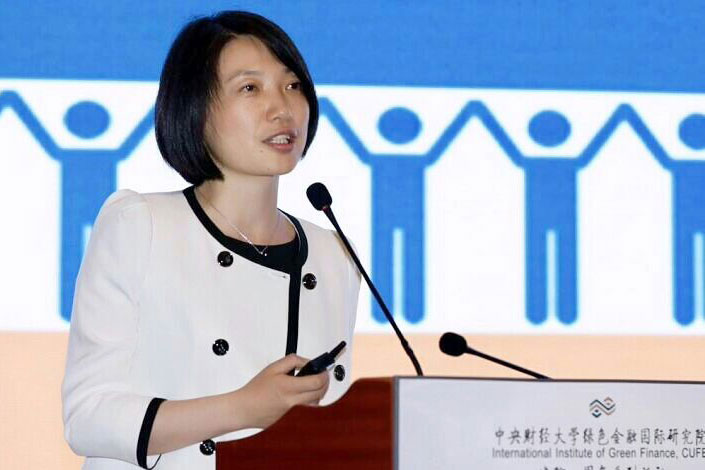 Professor Wang Yao, head of the International Institute of Green Finance (IIGF) at Central University of Finance and Economics in Beijing, speaks at an event to mark the first anniversary of the institute on Sept. 20. Photo: IIGF

China’s green finance garden has sprouted into the imagination of international investors.

Last year, China overtook the U.S. as the world’s largest issuer of green bonds, which are used to finance primarily low-carbon projects. Propelled by pressing climate challenges and ample market liquidity, China issued $244.6 billion worth of green bonds in 2016, or a third of new issuance globally, according to the Climate Bond Initiatives.

“Global investors are eager to participate in China’s green finance,” said Wang Yao, director general of the International Institute of Green Finance at the Central University of Finance and Economics in China.

While funding climate-friendly projects and infrastructure has been “a strategic priority,” as China’s central bank Governor Zhou Xiaochun once put it, public funding has managed to meet only 15% of the country’s capital needs. Therefore, China’s burgeoning green bond market shows that private capital is a much-needed force behind a greener China.

Apart from developing a local green bond market, China’s efforts to facilitate cross-border green investments have been recognized by the United Nations. In June, the government announced five “green finance” pilot zones in the provinces of Guangdong, Guizhou, Jiangxi, Zhejiang, as well as the Xinjiang Uyghur autonomous region.

Industrial and Commercial Bank of China (ICBC) issued $2.1 billion in One Belt One Road Green Climate Bonds in late September on the Luxembourg Green Exchange. ICBC is the first Chinese bank whose “Green Bond Framework” is compatible with both international and Chinese green standards, the bank said.

Wang, an ardent advocate of green finance, is a fellow or advisor at several prestigious institutions and has written extensively on the low-carbon economy and climate finance. In an email interview with Caixin, Wang explains the explosive growth of China’s green finance market, as well as its role in pushing the global agenda forward. The excerpt below has been edited.

Caixin: How have recent events surrounding the admission of Chinese A shares into MSCI indexes and the U.S. decision to pull out of the Paris Agreement affected China’s green finance market?

Wang: There is great demand for Chinese equity internationally, so allowing Chinese shares on the MSCI index through the Hong Kong stock connect program simply allows for more efficient allocation of global capital.

If China continues to open its market to foreign investors, and if both the MSCI and FTSE fully include Chinese A shares, this could lead to new inflows of up to $500 billion. By then, we believe that Chinese stocks with a high rating on environmental and social standards could be particularly attractive to green investors.

On the other hand, the U.S. pulling out of the Paris Agreement likely has a limited effect on the Chinese green finance market.

First, the rest of the world’s commitment to the agreement remains unshaken. Furthermore, the policy support from the Chinese government in promoting green finance is stronger than ever. As the U.S. appears less ambitious, investors might be even more interested in holding Chinese green bonds.

What is the outlook of China’s green finance sector? What challenges is it facing and how should they be addressed?

All signs suggest a continuation of the rapid expansion in China. This includes within green bonds, green stock indexes, green funds, environmental risk assessment and much more.

The main challenge is to convince investors that sustainable investments could be profitable, as is supported by research from the MSCI, Oxford University and Arabesque (a multinational asset management company). Green investments are often perceived as riskier, but this is not necessarily the case. Recent research by the Bank of International Settlements and Natixis pointed out that green bonds actually carry lower coupon rates than other bonds with similar maturities.

As we have a better grasp of environmental risks in those investments, it becomes clearer that green may in many cases be less risky, as highlighted by the G20 Green Finance Study Group that met in Hangzhou in September 2016.

The process is well under way, but will take years to scale up. Ultimately, establishing a green finance system is simply increasing economic efficiency by incentivizing green investments and penalizing polluting investments.

On the global market, how have Chinese green bonds been received? Who are the investors both domestically and internationally?

Chinese green bonds have been very well received on the international markets.

Currently, a number of Chinese green bonds are listed on the London Stock Exchange and Luxembourg Stock Exchange through indexes, which were oversubscribed several times at issuance.

In addition to that, 27% of the total $36.2 billion of Chinese green bonds have been issued directly on foreign exchanges. The Hong Kong Bond Connect can also be a direct channel for foreign investors to purchase Chinese green bonds. Still, foreign investors only hold 1.25% of the total Chinese bond market, indicating a great potential for increased future involvement.

Some investors are reluctant to invest in Chinese green bonds, saying the Chinese market is harder to fully comprehend. This is one of the reasons China and the EU are now harmonizing their green bond standards. When foreign investors find Chinese green bonds easier to understand, their appetite is expected to increase.

As mentioned, China and the EU are currently jointly working on how to harmonize green bond standards. The commitment toward this process is shown by the European Investment Bank’s Vice President Jonathan Taylor and People’s Bank of China Chief Economist Ma Jun’s meeting on the topic in March 2016. This aim is to offer investors more clarity and transparency.

As the first step, the standards from both sides will have to be mutually compatible, meaning that one can easily translate a project listed within a sector from one standard toward another, and better reflect local circumstances. For example, while the EU emphasizes climate change mitigation, China finds other aspects such as pollution just as important.