By Yang Yifan and Susan Xu 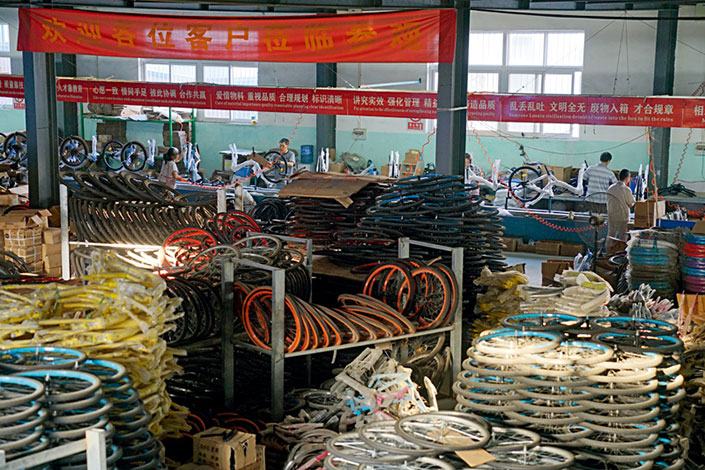 Bicycle parts are stacked ready for assembly at the Lexus bike factory in the village of Wangqingtuo, Tianjin, as workers put bikes together on the production line. Making a bike requires about 10 separate procedures, which can all be completed in less than 10 minutes.

Since the craze for shared bikes began in 2016, the number of these bikes and the companies renting them out has rapidly increased. A total of 5.54 million shared bikes were littering the streets of Beijing, Shanghai, Guangzhou and Shenzhen as of Sept. 15. However the government is now trying to get a handle on the industry.

On May 22, the Ministry of Transport released regulations about the bikes. By Sept. 15, 13 cities had introduced rules to cap the number of shared bikes available to riders.

Despite these rules, supply still exceeds demand in the fiercely competitive sector, which has had a knock-on effect on the country’s bike manufacturers.

Wangqingtuo, a village in Tianjin with many workshops and factories churning out bikes and bike parts, has found itself in a tough spot. Before the sharing economy revolution, online bike stores would sell hundreds of bikes a day. However sales have plummeted as more consumers are choosing the shared bikes over owning their own, making the factories more reliant on the fickle startups.

Most of the Wangqingtuo’s manufacturers are small or midsized assembly plants that put together parts sent to them by their shared-bike clients. When the industry was rapidly expanding, the factories were swamped with large orders. But after many of them were burned by unstable shared bike firms, they now prefer to take on smaller, less risky orders. With several bike-sharing companies facing cash flow problems or even bankruptcy, factories have not been paid for some orders.

This phenomenon has forced several Wangqingtuo factories to shut down after getting stiffed by bike-sharing companies, some of whom are deep in debt. On Aug. 2, the company behind the Dingding bike-sharing service, which had put out 10,000 bikes by the end of 2016, was branded an “abnormal enterprise” by the authorities due to illegal fundraising and cash flow problems. Some bike factories have even started to refuse orders from bike-sharing companies.

Lexus Bike, a Wangqingtuo factory that produces bikes for one of the largest bike-sharing firms, Alibaba-backed Ofo, has escaped some of these problems because the bigger companies are more reliable. Wang Luxian, the manager of Lexus, said that smaller factories only accept cash to reduce their own risk.

Customers of bicycle manufacturer Meibang Bike need to pay half the cost of their orders up front, said a company manager surnamed Fan. “We won’t start work unless we’ve received payment,” he said.