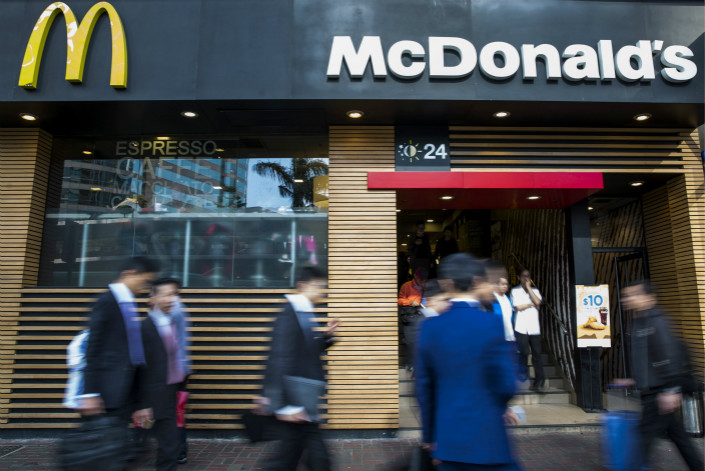 Although the owners of McDonald's China have changed the name of the franchise to Golden Arches China, or Jingongmen, the restaurants themselves will continue to be identified by Chinese characters that spell out the original Mandarin name — Maidanglao. Photo: Visual China

The recent buyers of McDonald’s China have decided to distinguish their franchise from the global burger behemoth by adopting the name Golden Arches China.

Golden Arches, which is also the name of the fast-food chain’s famous logo, is the English-language version of the franchise name chosen by its new owners — a Chinese conglomerate of Citic Ltd., Citic Capital and Carlyle Capital that completed the acquisition of a majority stake in McDonald’s Corp.’s China business for $2.08 billion in August. The Chinese version of the new name is Jingongmen, which is Mandarin for “golden arches.”

The restaurant name, operations and food standards for McDonald’s outlets on the mainland and in Hong Kong will not be affected by the change, Golden Arches told Caixin. The restaurants will continue to be labeled with the Chinese characters that spell out the original Mandarin name — Maidanglao.

The name officially changed Oct. 12, according to company records filed with the State Administration for Industry and Commerce.

The Chinese franchisee, one of the largest McDonald’s partners outside the United States with about 2,700 outlets spread across China, including Hong Kong, took a cue from the company that bought McDonald’s Latin American operations in 2007 and renamed the entity Arcos Dorados, which is Spanish for “golden arches.”

Golden Arches China plans to add 2,000 restaurants on the mainland over the next five years. The expansion plan targets mainly third- and fourth-tier cities, which the company hopes will host 45% of all McDonald's outlets in China by 2022.

Golden Arches is also growing its online-to-offline delivery business. The company wants 75% of all McDonald’s restaurants in China to offer delivery services to customers through internet orders by 2020.

Meanwhile, the Chinese company that owns the biggest McDonald’s biggest rival in China, KFC, is also expanding its online-to-offline business.

KFC operator Yum China Holdings Inc. in May bought an 80% stake in Daojia, an online service for high-end restaurant deliveries.

Yum China operates now more than 5,300 restaurants on the mainland but is expanding. CEO Pan Weiqi announced in November a plan to triple the number of mainland restaurants, including KFC, Pizza Hut and Taco Bell outlets, within 10 to 20 years.