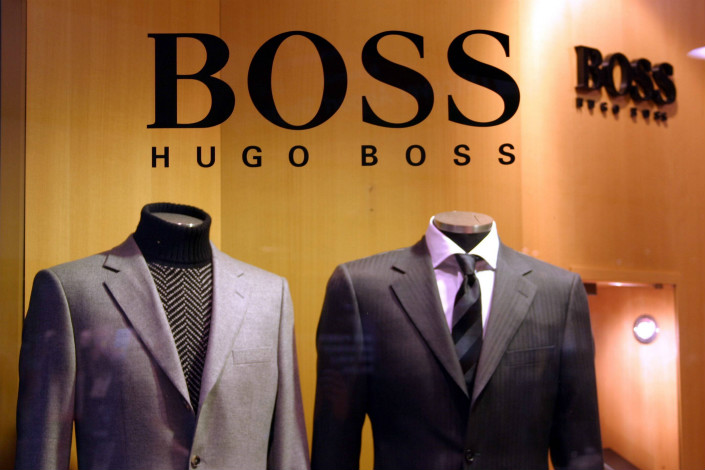 In the case of German fashion company Hugo Boss, China’s trademark authorities have upheld the registration of BOSSsunwen, a remarkably similar clothing label created by a Chinese company. The decision overlooks evidence that the BOSSsunwen trademark is likely to be confused with the older, well-known, BOSS Hugo Boss trademark. Photo: IC

When making purchasing decisions, no one wants, as the saying goes, to have fish eyes passed for pearls. At this point in China’s economic development Chinese consumers and manufacturers have come to value the quality and reliability of many foreign — and increasingly indigenous Chinese — products. However, what if, for example, the clothes you wear or the technology you use for infrastructure projects are not the pearls you thought you bought, but actually undesirable fish eyes?

The more China transitions into a modern knowledge-based economy, the more important the issue of protection of intellectual property rights — sorting the fish eyes from the pearls — becomes. This issue is of special importance to the Sino-German economic partnership, because German companies bring their most advanced know-how to the Chinese market, thus contributing to the modernization of the Chinese economy.

Furthermore, proper IPR protection is crucial for the continued success of private Chinese entrepreneurship. Companies, including startups, will only invest in their capacity to innovate if the resulting new ideas are sufficiently protected from infringements. If China wants to avoid getting stuck in a middle-income trap, the Chinese economy will need to further strengthen its power to innovate. This has many prerequisites, not the least of which is comprehensive IPR protection.

Finally, functioning IPR protection is an important litmus test on which foreign companies base their investment decisions. It is a barometer for the quality of the rule-of-law in an economy. If the institutions administrating IPR law do not function in a proper and reliable manner, companies find it harder to predict their future in China, and thus may hesitate to invest. At a time when foreign direct investment in China is slowing, that kind of uncertainty is in nobody’s interest.

In short, better IPR protection would be a win-win. That is why the Chinese government has made it a priority. In fact, according to experts, Chinese IPR protection is by now in many ways state of the art. Just last September the government reinvigorated its reform efforts with a new 11-point action-plan. However, so far the results are decidedly mixed. The problem lies in enforcement, which still seems anything but reliable.

Out of several cases, two examples of German companies who have decided to come forward illustrate the point:

The first case involves Hugo Boss, a fashion company that has been doing business in China for decades. Its well-known brand BOSS Hugo Boss has enjoyed domestic protection in China since the middle of the 1980s. However, the foreign-owned enterprise’s business and its reputation has been suffering for almost 15 years thanks to a Chinese company that registered and uses a very similar label — BOSSsunwen — to sell identical goods on the Chinese mainland. Authorities seem unable to properly address the malicious behavior. In the case of Hugo Boss, the trademark authorities and several courts have upheld the registration of BOSSsunwen, repeatedly overlooking evidence that establishes the likelihood of confusion with the well-known, older BOSS Hugo Boss trademark. As a result, Chinese customers are even now being misled, believing that buying a “BOSSsunwen” product would get them a high-quality product from a highly regarded German company. Interestingly, courts in Hong Kong seem to have a deeper understanding of the core principles of intellectual property, and forbade the Chinese company from using their fashion brand. Hong Kong authorities then resolutely enforced that decision.

The second case involves one of the largest German construction companies, Ed. Züblin AG. This company was invited to bring their noise insulation technology to the Chinese market, where it was registered as patent after the State Intellectual Property Office (SIPO) examined the application for about five years. Since then, the technology has been applied to almost all of the high-speed railway tracks in China. However, Chinese competitors started to violate the patent by constructing counterfeited products. After Ed. Züblin AG successfully sued one of these companies for patent infringement, SIPO re-examined the patent and, surprisingly, revoked its own previous decision without a satisfactory explanation. Were these five long years not enough to come to the right decision? The intellectual property courts have now upheld that inexplicable reversal twice.

These striking examples have a few common characteristics. Most obviously, Chinese customers are negatively impacted, because they are not getting the quality and safety standards they believe they are buying. Further, the affected foreign companies are suffering considerable losses in revenue and reputation in the Chinese market, even though they have made outstanding contributions to the Chinese economy for a long time. And last, but certainly not least, these cases cause considerable uncertainties in the foreign business community about the much-touted rule of law in China. This last point is what is most disconcerting. Is IPR protection in China sufficiently reliable to calm worries among foreign companies — and potential investors — about bringing their best ideas to the Chinese market? There have been significant improvements. Germany and other partners, including the EU and the U.S., will continue to push for further progress. And President Xi Jinping has just recently reaffirmed the importance of the issue. Alas, as the above examples show, there is a long way to go.

Michael Clauss is the German ambassador to China.