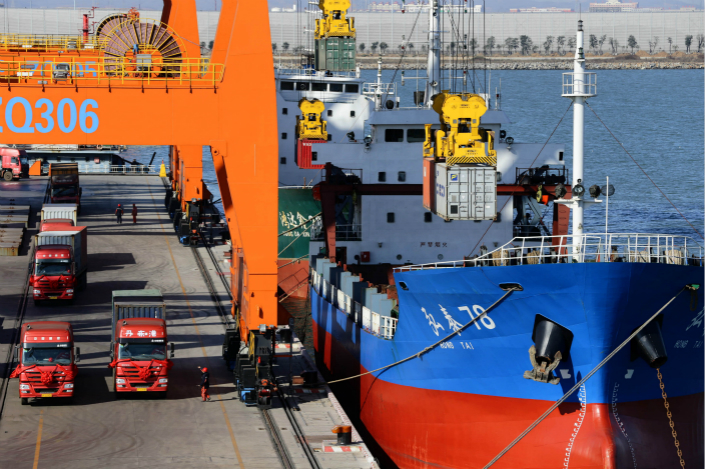 The governments of Liaoning province and the city of Dandong are working on a deal that would result in China Merchant Group's taking over the privately owned Dandong Port Group Co. Above, Dandong Port in Liaoning is seen on Nov. 8. Photo: Visual China

Debt-ridden Dandong Port Group Co., the port operator that defaulted on a 1 billion yuan ($151 million) bond this week, may be taken over by state-owned conglomerate China Merchants Group (CMG) to help repay its borrowings and save the company from collapse.

The governments of Northeast China’s Liaoning province and Dandong, a city on the North Korean border where the company is based, are working on a deal that would result in CMG’s taking over the privately owned business, which is sinking under 46.5 billion yuan of liabilities, people familiar with the matter told Caixin.

CMG, which owns and runs ports across China and overseas, has completed its due diligence on Dandong Port, and an acquisition plan may be put forward by the end of the year, according to a manager from Citic Securities Co. Ltd., the main underwriter of the bond. In early August, executives from CMG toured the port with Dandong government officials, according to a report on Northeast News, an online news portal run by the provincial government.

In the meantime, the local authorities have stepped in to broker a deal that would enable Dandong Port to repay the bond that is in default. Both Liaoning and Dandong governments are actively seeking funds and addressing the company’s debt default, Yu Huichun, an official from Dandong Port responsible for financial information disclosure, told Caixin. The matter may be resolved within the next two weeks, Yu said.

Liaoning province and CMG know each other well — in June, they signed a wide-ranging cooperation agreement involving port logistics, financial services, transport and health care, among other sectors. As part of the package, CMG signed a framework agreement to take a controlling stake in a new holding company, Liaoning Port Group, which will manage the province’s two biggest ports, Dalian Port and Yingkou Port, with plans to integrate the operations of other ports. CMG bought a 21% stake in Dalian Port in 2016.

The move supports the central government’s policy of merging and streamlining state-owned enterprises to make them more efficient and benefit from economies of scale.

Although Dandong Port Group is privately owned, it has close links to the Liaoning and Dandong governments. Its largest shareholder is Wang Wenliang, one of several dozen deputies from the province expelled from the National People’s Congress, China’s national legislative body, in a vote-buying scandal last year. Wang controls Rilin Enterprise Ltd., which has a 36% stake in the company.

On Monday, the company said it had failed to meet a demand for early repayment of a 1 billion yuan bond, citing its “debt burden and pressure to meet short-term financial obligations,” according to a statement it posted on Chinamoney.com, a website of the National Interbank Funding Center.

The five-year bond was issued on Oct. 30, 2014, carrying a coupon rate of 5.86% and giving holders the option to demand repayment of the principal in three years. When they exercised that option last month, the port couldn’t pay back an unspecified amount of the principal although it managed to pay back 58.6 million yuan in interest, according to the statement.

As it struggled under its mounting debts and slowing activity at the port as a result of China’s crackdown on trade with North Korea, Dandong Port raised the coupon rate by 140 basis points to 7.5%, hoping that would be enough to persuade bond holders not to exercise their option, people familiar with the matter told Caixin.

The company had already managed to head off the default of two other bonds totaling almost 2.1 billion yuan due earlier in October, thanks to the intervention of the local government, another person with direct knowledge of the matter told Caixin.

Shanghai Pudong Development Bank Co. Ltd. which held most of a 1.5 billion yuan bond swapped the debt into bank loans, while Dandong Bank, a local state-controlled bank, offered a bridging loan to allow the company to repay principal and interest on a 560 million yuan bond, the source said.

Business registration documents show that the Dandong Finance Bureau, the financial department of the city government, is the biggest shareholder in Dandong Bank with a 20% stake.

Dandong Port’s debts have piled up after years of aggressive expansion, as the local government promoted the development of the artificial deep-water seaport at the mouth of the Yalu river as a pillar of the city’s economic growth.

Dandong is a gateway between China and other countries in northeast Asia. The port’s annual throughput rose to 200 million tons in 2016 from 120 million tons in 2012, government data show. But its profitability has started to suffer as a result of its soaring debt, a slowdown in China’s economic growth, and a slump in trade with North Korea as a result of United Nations sanctions. China has halted the export of liquefied natural gas and limited the export of refined oil to North Korea, and cut imports of coal, iron ore and textiles.

Dandong Port’s net profit in the first nine months of 2017 fell 19.6% year-on-year to 538.96 million yuan, according to the company’s income statement.