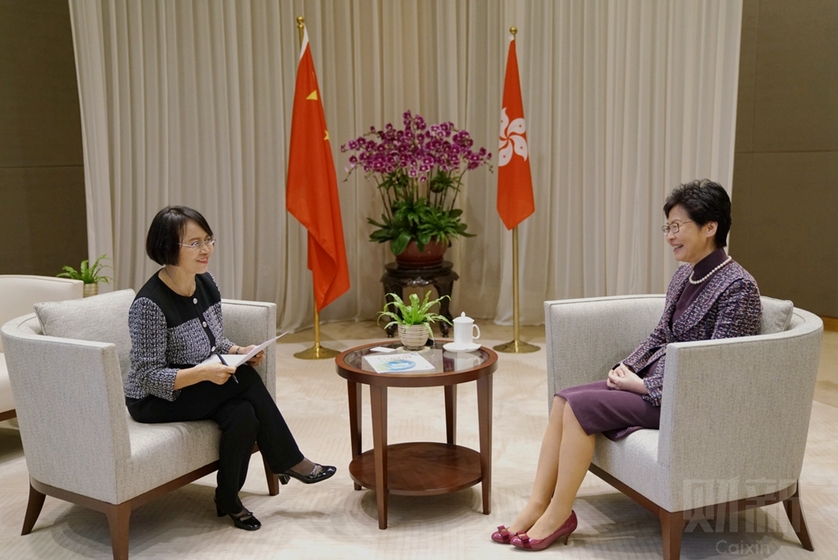 Twenty years may have passed since Hong Kong’s return to China, but some things have remained the same in the Special Administrative Region.

One of the most vexing problems is the city’s perennial housing shortage, which Chief Executive Carrie Lam touched on in her first annual Policy Address, delivered in October. More than five decades after Hong Kong’s public housing system was first launched, demand still overwhelms supply—as of June, the city had more than 270,000 outstanding public rental-housing applications, according to its Housing Authority. Lam has introduced a plan to set up a land-supply task force to look at the issue.

But elsewhere are many signs of change. An ongoing effort by China’s central government to integrate the Pearl River Delta region has gathered pace. In July, with Chinese President Xi Jinping as a witness, Lam and the leaders of Guangdong Province and the Macau Special Administrative Region signed an agreement to develop the Guangdong-Hong Kong-Macau Greater Bay Area.

Lam, previously the city’s secretary for development, was voted into her position by 777 electors in March and sworn in on the 20th anniversary of Hong Kong’s return to China.

In a wide-ranging interview with Caixin, Lam said Hong Kong must rethink its laws if it wants a share of the rising new economy, and that the “cosmopolitan metropolis” needs to meet locals’ housing needs while keeping global investors’ interest. She also addressed expectations for her as Hong Kong’s first woman chief executive.

Caixin: In your policy address, you called for Hong Kong to review its existing laws to lower barriers for the new economy. What is the main idea behind this?

Lam: Many new-economy models are incompatible with existing legislation. If our laws and regulations don’t change, the new economy will have no way to exist legally in Hong Kong. That’s why I’ve requested that the government form a committee to look at how some laws affect the new economy, especially laws that affect the development of the sharing economy.

Another area that needs to change is the government’s behavior. Many businesses and residents want to apply for things… but our existing rules can’t keep up with current demand, especially in the area of technology. The Special Administrative Region’s government has set up many funds to support the development of some industries, but many have complained that the application process is too cumbersome, or that applications are frequently unsuccessful.

How do you interpret President Xi Jinping’s comment, during his 19th Party Congress speech, that the “One Country Two Systems” model will not change?

This year is the 20th anniversary of Hong Kong’s handover, and I have personally worked in government for 37 years. Close to half that time was before the handover, the other half was after. I can definitely say, the implementation of “One Country, Two Systems” is very successful. Hong Kong has been able to benefit from the country’s deepening reform and opening up, and the central government’s strong support for Hong Kong. Hong Kong has also been able to maintain a relatively unique system.

Whether it’s in our financial system, our legal system or Hong Kong’s international relations and foreign affairs, we are able to operate with a high degree of autonomy. Although, in these past 20 years, we have experienced two financial crises, we’ve managed to get through them with the country’s support. Of course, we’ve also put in our own effort, and Hong Kong’s economic development on the whole has been quite good.

Hong Kong’s dominant real-estate industry has been criticized for limiting the development of other industries. How do you think Hong Kong should resolve the conflict between traditional industries and the new economy?

To give an example: There’s a very big plot of land in Hong Kong, where Kai Tak Airport used to be. It was previously a logistics center, so there was an industrial area nearby. But Hong Kong no longer has much of a manufacturing sector, so when I was head of the Development Bureau, we came up with the Energizing Kowloon East plan, to develop this large area and build a second core business district for Hong Kong, like the existing one in Central.

Another issue is supporting youths doing creative, entrepreneurial, innovative work. Because the rent is too high, they can’t find workspaces. So, we’ll soon announce a workspace-sharing plan for young people. Together with real estate developers, we’re looking for some spaces that we will lease to young entrepreneurs at cheap rates.

Actually we’ve also cooperated with Shenzhen, where there are at least two youth workspace-sharing programs—the Shenzhen-Hong Kong Youth Innovation and Entrepreneur Hubs in Qianhai and Nanshan.

How do you see Hong Kong growing into an innovation and technology hub, and what challenges do you think neighboring Shenzhen’s earlier success presents for Hong Kong?

Developing an international innovation and technology center is definitely not something Hong Kong will achieve on its own. Rather, it’ll be achieved by Hong Kong and Shenzhen working together, or with other cities in the surrounding region. That’s because, after you achieve research results, you still need to develop products. Hong Kong’s modern manufacturing capacity is very small, but many places in Guangdong have modern manufacturing capabilities.

Even with a well-established public housing system, and parallel rental and home sale markets, Hong Kong still struggles to meet social housing needs. What needs to be improved?

We were actually one of the first places in the region to develop a public-housing system, in the 1950s. But why, decades later, is housing still the top concern for people in Hong Kong? Right now, housing policy is among my top priorities, and if you ask the people of Hong Kong, it’s also the number one problem they want the government to solve.

I have a few thoughts on this issue. Firstly — although we don’t have much of it, we still have some land. Hong Kong has an area of around 1,100 square kilometers. Around 26% of that land has been developed, with over 70% still undeveloped. A lot of this 70% is legally protected parkland. Even though I, too, don’t particularly wish to develop this type of land, ultimately, we can still free up some more space. The difficulty right now is that there’s no agreement within society over how to develop this 70%.

Additionally, we’re a cosmopolitan metropolis, an open economy where capital enters and leaves very freely. If investors and businesses wish to buy property in Hong Kong, it’s very difficult to entirely restrict them. But our residents definitely have housing needs, because in order to have a sense of belonging, a sense of home, you need housing.

So, we face a lot of challenges in public housing, thanks to these different factors. Approximately 280,000 households are still waiting for their public housing applications to be processed. And in the meantime, private housing prices are rising too fast, and have already exceeded what ordinary families can afford… So, if you’re asking how to solve this—one of the solutions is to increase supply, and reach a social consensus as soon as possible, to open up large tracts of land, and build more homes.

Hong Kong has maintained a fiscal surplus for the past 13 years, but some have criticized the Hong Kong government as being “miserly.” What’s your view on Hong Kong’s fiscal policy in recent years?

The last time the Hong Kong government was in the red was during the 2003-2004 fiscal year. But the Asian Financial Crisis had just faded, the Hong Kong unemployment rate was higher than 8%, and we faced the SARS crisis, so a lot of factors appeared within a short period of time. But since then we’ve had a fiscal surplus every year, which is now higher than 1 trillion Hong Kong dollars.

What does 1 trillion dollars mean? This is equivalent to two years of government expenses, including services and infrastructure spending. I think Hong Kong is now very able to use its government reserves, accumulated over many years, to do some things that would benefit the city’s development.

The first thing is investment, whether it’s infrastructure or human resource training. Another use would be to solve Hong Kong residents’ difficulties. We still have a poverty problem, some people who’re willing to work hard still face limitations, so the government should take on a supportive role.

What is the government doing about inequality, which has become a major social and political issue in Hong Kong?

During the five years of the previous administration, we raised our regular expenditure on social welfare by 71%, from over HK$40 billion to over HK$70 billion today. This is unprecedented in Hong Kong — many previous governments had difficulty investing so many resources in such a short time into social welfare.

Hong Kong currently has relatively good policies for retirees, next year we’re even introducing a new, stronger pension program. Elderly residents in need can get approximately HK$3,500 (per month) from the government. That’s a very decent standard.

For those who are able to work, but face heavier family burdens, have more children, and have lower incomes, the government has also in the past year introduced a low-income working family allowance. In April, the allowance will be increased. After next year’s change, a four-person family, including two children, can receive a HK$3,200 allowance each month.

In addition to material disparities, there seems to be negative sentiment and tension between different segments of Hong Kong society. How do you think these differences can be bridged?

Actually, the atmosphere in Hong Kong in the past few months has been relatively peaceful. But some problems are deeper, like young people’s dissatisfaction about the government. Even though a larger proportion of young people today are able to attend university, after graduation they face the issues like finding a job they consider suitable, achieving better wages, whether they can afford to buy a home, have children. Young people feel that the Hong Kong government has not completely solved these problems. So, I think that in order to address young people’s dissatisfaction with the government, we will on one hand provide them with some ways to express their views and participate in the governance process. But we must also offer practical solutions to the problems they face.

You’re Hong Kong’s first woman chief executive—do you think you face particular challenges or pressures because of your historic status?

There aren’t any unique challenges, because whether the chief executive is a man or a woman. Work demands are pretty much the same. Additionally, before I became chief executive, I’d already spent 30 years working in government, so becoming chief executive wasn’t a major issue…. I’m still constantly learning, because something new happens every day, and Hong Kong is also a relatively complicated place to govern.

But, as a woman chief executive, there is maybe more pressure on me in terms of the female population, some expectations that, because I’m a woman, I must do more for other women, like increasing maternity leave, offering more childcare services to help women participate in the workforce. There are expectations in all these areas, so I’ll do my best to fulfill them.