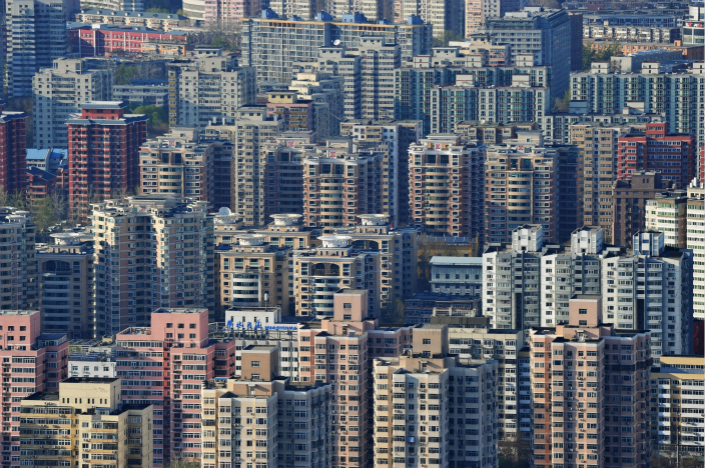 In 18 of 70 major Chinese cities, including Beijing (pictured), new home prices edged down in September from the previous month as government controls continued to put pressure on prices. Photo: Visual China

(Beijing) — Residential property sales will dip in the second half of next year due to prolonged government property restrictions, further straining Chinese property developers, credit ratings firm Moody’s predicted in a report.

“National contracted sales — measured on a 12-month average basis — will likely fall by up to 5% for the second half of 2018, following an estimated growth of 7% to 10% for the full year 2017,” said Kaven Tsang, a Moody’s vice president and senior credit officer.

Despite this predicted drop, Moody’s still forecasts that China’s property market will be stable in 2018 as “such a result would still fall within the parameters of our stable outlook for the sector,” Tsang added.

Moody’s said that the decline will be mainly driven by lower sales volumes, due to ongoing government regulatory controls in China’s major cities, and weaker sales in lower-tier cities, after lower-tier cities posted robust growth in 2017.

Beijing kicked off the latest round of regulatory controls, which started in October 2016 and intensified in March,  in a bid to contain soaring residential property prices in the Chinese capital. More than a dozen major cities have followed Beijing’s lead.

Eighteen of 70 major cities, including Beijing and Shanghai, have seen new home prices edge down in September from the previous month, data from the National Bureau of Statistics showed. On an annual basis, new house prices were down in only three of the 70 cities.

Indeed, Moody said a real price correction is unlikely because of the “healthy levels of inventory and strong mass market demand,” although official price caps will constrain growth in prices for new homes in major cities.

Moreover, the government’s call for the development of the rental housing market will also limit growth in property prices, Moody’s said, because the aim is to “ensure more stable prices.”

The central government has enrolled 12 cities with a net population inflow in a trial program to encourage growth in the rental market, as President Xi Jinping, reiterated that houses are for living in, not speculating on.

More than 50 cities, including the 12 in the trial program, have unveiled policies to boost the rental market by adding to their inventory and encouraging different entities to enter the market to facilitate greater competition, according to an article published by the official Xinhua News Agency that cited data from real estate service company Centaline Property.

Xinhua said the increased supply in rental properties could lead to a drop in rents.

Besides the recent administrative interventions, China is also pondering the possibility of levying a property tax as a long-term method to adjust property prices.

China aims to eventually charge a real estate tax based on the appraised value of industrial, commercial and residential properties, Finance Minister Xiao Jie wrote in a recently published article.

However, the lack of a specific law on this matter and complexities in determining tax bracket thresholds based on property value suggest that there are still years to go before such a tax will take effect, experts said.

The impact of controls on household mortgages and bond issuances since early 2017, which could constrain cash collection and funding availability for developers, seems to have been limited, Moody’s report said.

Most Moody’s-rated Chinese property developers will have no difficulty in meeting their debt obligations in 2018, in respect to the $40 billion in offshore and onshore bonds they have issued that will mature or be puttable next year.