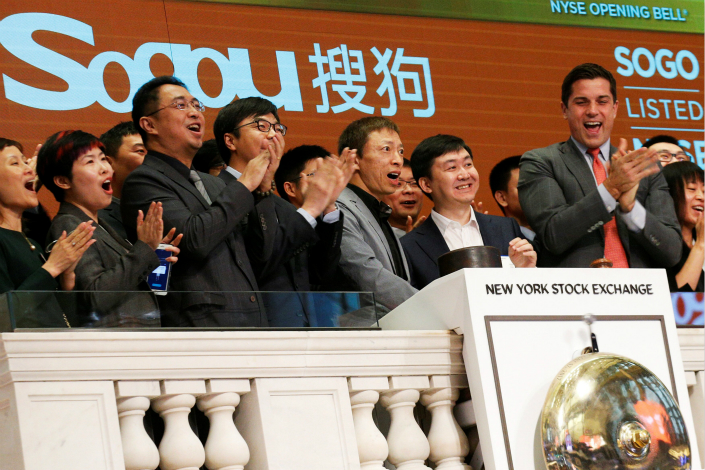 Shares of Sogou Inc. initially rose as much as 13% when the stock began trading on Thursday in New York City, but later gave back most of the gains. Above, Sogou Chairman Charles Zhang (center, in gray jacket) and CEO Wang Xiaochuan (second from right, in white shirt) ring the opening bell at the New York Stock Exchange on Thursday. Photo: Visual China

Newly listed shares of search engine Sogou Inc. rose in their New York trading debut after pricing at the top of their range, as investors were enticed by the company’s close ties to internet giant Tencent Holdings Ltd.

Sogou’s American Depositary Shares (ADSs) priced at $13, representing the top of their previously announced range of $11 to $13, according to a company announcement. At that level, the company, whose name means “search dog,” raised $585 million. The figure could rise to as high as $650 million if the underwriter exercises an overallotment option.

The shares initially rose as much as 13% when the stock began trading on Thursday in New York, but later gave back most of the gains and closed a modest 4% higher at $13.50. The company’s profit, excluding extraordinary items, fell 44% last year to $56 million, as its revenue grew 12% to $660 million. Sogou is controlled by internet portal operator Sohu.com Inc., but counts Tencent as a major shareholder with nearly 40% of the company.

At current levels the company is valued at about $6 billion.

Founded more than a decade ago, the company operates in an online search market dominated by Baidu Inc., which reported a $1.2 billion profit on $3.53 billion in revenue in its latest reporting quarter. Most surveys cite Baidu as the market leader with more than 50% share, while Sogou usually finishes third with about 15%, behind No. 2 player Qihoo 360.

Sogou parent Sohu previously made an IPO for its game unit, Changyou, but is now trying to privatize the company due to weak performance that included a net loss and falling revenue in Changyou’s latest reporting quarter.

Sogou is the latest in a string of private Chinese internet companies to make offshore listings over the last two months. Many of those have come from the financial technology sector, which combines financial services with the internet and other high-tech elements. In the largest of those, online insurer ZhongAn Online Property & Casualty Insurance Co. Ltd raised $1.5 billion in a Hong Kong offering in September. The second largest saw online microlender Qudian Inc. raise $900 million last month.