Heavier Drones to Find It Harder to Get Off Ground

By Huang Rong and Wu Gang 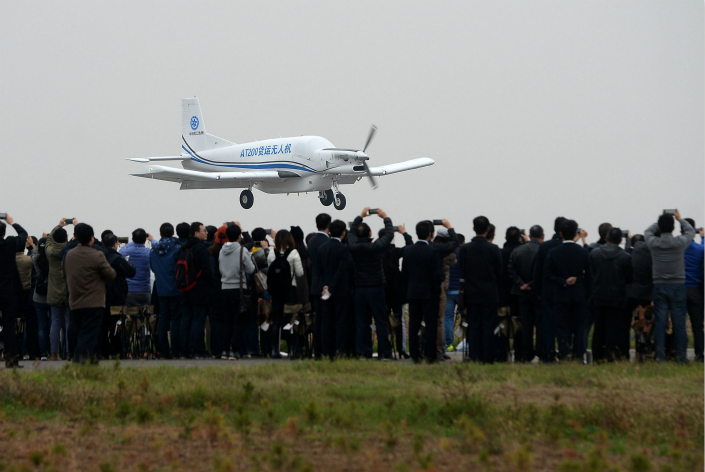 A Chinese aviation official said that large drones won't begin commercial operations for some time because they currently fall outside existing aviation regulations. Above, China's heaviest cargo drone, the AT200, flies during its first public demonstration flight in Neifu Airport in Weinan, Shaanxi province, on Oct. 30. Photo: Visual China

Although a final set of rules have not yet been decided, the aviation regulators are likely to subject only those models that weigh more than 25 kilograms (55 pounds) to flight safety scrutiny, said Xu Chaoqun, an official in charge of airworthiness certification at the Civil Aviation Administration of China (CAAC).

Leading e-commerce giants and delivery companies including, JD.com Inc. and SF Express, have been developing unmanned drones to deliver packages over the past year. SF Express even unveiled a fixed-wing aircraft in October, which has a wingspan of 13 meters (42.7 feet) and is capable of carrying 1.5 metric tons (1.65 tons) of goods.

Xu said it will still take a long time for large unmanned aircraft like the drone developed by SF Express to start commercial operations because they fall outside existing aviation regulations and will have to wait for specific airworthiness certification policies to be enacted.

The CAAC started to enforce real-name registration for civilian drones that weigh over 250 grams (8.8 ounces) on June 1. It is also drafting a registration policy for drone manufacturers. The Chinese government is “actively” exploring regulatory options in this area, Xu told Caixin on Monday after a regular news briefing, adding that such policies are missing in China and many other countries.

Xu said that drones are more complicated to regulate than conventional aircraft as the lack of an onboard pilot brings different risks. The environment in which a drone flies is also a key factor for regulation.

“Regulations could be looser if the aircraft flies through deserts,” Xu said. “But if it flies over densely populated areas, the regulations will be much tighter.”

In another development, Chinese automaker Zhejiang Geely Holding Group Co. Ltd. announced on Monday that it has finalized its acquisition of a U.S.-based startup that has been designing flying cars.

Geely, the parent company of Volvo Cars, has not disclosed the price it paid for Terrafugia, but it said that the firm’s headquarters will remain in the U.S. and that the company is expected to mass-produce the world’s first flying cars by 2019.

Xu told reporters on Monday that China has not started any research into airworthiness regulations for flying cars.