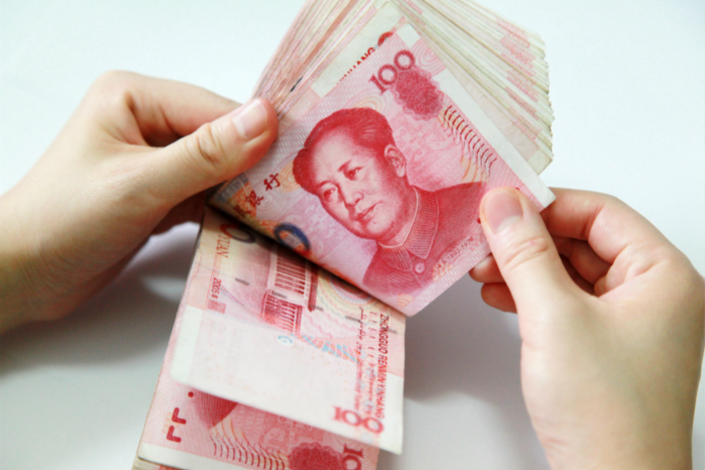 Smaller banks, particularly city commercial banks, which have been more aggressive in their lending practices, saw their average nonperforming loan ratio increase to 2.95% at the end of the third quarter, up from 2.49% at the end of 2016. Photo: Visual China

China’s commercial banking sector has managed to keep its official nonperforming loan (NPL) ratio steady for the past year, with the latest data from the industry regulator showing bad debts amounted to 1.74% of outstanding loans for the fourth straight quarter.

But the number masks a significant and growing divergence between the performance of the big state-owned banks and smaller lenders, numbers released on Friday by the China Banking Regulatory Commission (CBRC) show.

The average NPL ratio of large banks in the first three quarters, including the Big Four state-owned commercial banks — Industrial and Commercial Bank of China, Agricultural Bank of China, China Construction Bank and Bank of China, stood at 1.54%, down 14 basis points from the end of 2016.

Smaller banks, particularly city commercial banks, who have been more aggressive in their lending practices and tend to make riskier loans, saw their average NPL ratio increase to 2.95% at the end of the third quarter from 2.49% at the end of 2016.

Bankers familiar with the matter told Caxin that some local government officials have been interfering in the reporting of nonperforming loans by commercial banks in their jurisdictions.

“They provide some suggestions or hints to local banks to conceal the true state of their nonperforming loans in order to comply with the general policy of keeping NPLs from rising,” a bank employee who declined to be identified told Caixin. “They don’t care how it’s done, as long as the data that’s submitted to higher authorities looks better than it really is. These aren’t isolated cases either.”

Two major factors contributing to the steady NPL numbers are the structural adjustment now going on in the economy and intensified efforts by banks to write off problematic loans, said Lian Ping, chief economist at Bank of Communications. Even so, bad loans are still likely to increase because of the potential for risky assets to go bad as the economic slowdown and deleveraging campaign make it more difficult for borrowers to repay their loans.

As the government continues to cool the housing market by tightening purchasing criteria and imposing higher mortgage interest rates, sales will slow and some developers may encounter increasing difficulty in reducing inventories of unsold property to bolster their cash flow, Lian said. Smaller property developers with high debts would likely face mounting cash flow pressure, and may be at greater risk of defaulting on their loans, he said.

The country’s financial regulators are not resting on their laurels about the low NPL ratios and have kept up their warnings of the need to guard against risks and to maintain financial stability.

Over the past month, Zhou Xiaochuan, the governor of the People’s Bank of China (PBOC), has made several high-profile comments about the dangers of rapid credit growth, high corporate debt and financial leverage. During a press briefing in October during the Communist Party’s 19th congress he warned about the risk of China experiencing a “Minsky Moment,” or a crash in asset prices triggered by an unsustainable build-up of debt and credit-fueled speculation.

In an article posted on the PBOC’s website on Nov. 4, Zhou said risks were accumulating that could be contagious and hazardous, and that high leverage was making the financial system more vulnerable.